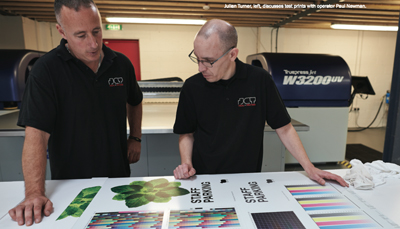 JCT Visual Communications has just invested in a Screen Truepress Jet W3200UV to drive the next stage in the company’s development.

Most people buying their first flatbed printer would probably opt for something close to an entry-level model so that they could test the market. But Julian Turner, who owns JCT Visual Communications, took a different approach, choosing instead to invest in Screen Europe’s latest wide format printer, the Truepress Jet W3200UV, a highly-productive mid-range flatbed first premiered at last year’s Fespa and only launched at the end of last year.

JCT Visual Communications, based at the edge of the New Forest in Hampshire, mainly produces retail and exhibition work, and counts companies like Pret A Manger and Pizza Hut amongst its clients. The company grew out of an older company, Nationwide Fitting Services, which was set up around 11 years ago when a printer suggested that Turner should try contract fitting. But Turner says that sometimes the graphics that he was asked to fit had been printed badly, noting: “The clients were being let down by the printing so we decided that we wanted to give them a bit more backup.”

So around three years ago he set up JCT Visual Communications, which has now taken over the fitting work but also offers printing. The company started with a roll-to- roll printer and as more and more customers heard about it so the business grew. Turner bought further printers to handle particular jobs, such as a roll-fed UV to print to hessian. When customers asked him about printing to boards he began investigating into flatbed printers.

It took him about 18 months to research and have a printer installed. He looked at a number of different printers, showing the results to customers to gauge their reactions. Some models couldn't match the sort of print quality and colour fidelity that his customers demanded while others were too expensive to run profitably. He even considered putting in two smaller printers, which would have given some level of redundancy, but been more expensive to service.

Turner says that choosing a printer is a matter of balancing out various factors, explaining: “I worked it out between affordability and what revenue it would make for us and whether the clients would be happy with that quality and would we be able to keep up with demand.”

He took advice from the printers that contracted the company for fitting, many of whom recommended the Inca Digital flatbeds, which lead Turner to Screen Europe for the latest model. Turner has previously worked as a precision engineer so he appreciated the build quality as something that was likely to last for a long time, saying: “I thought at once that it was the sort of output and quality that I wanted.”

Screen flew Turner out to its Amstelveen demo centre in the Netherlands last year and later he visited the beta test site and was further impressed that the printer was working as required.

There are several configurations but JCT has gone for the top of the range specification with CMYK plus light cyan and light magenta and two white channels. Turner says: “The whites were important to us because one of the jobs that we do is a backlit graphic with white writing.” He says that the light cyan and light magenta are to improve skin tones and for a wider gamut, adding: “It's like fine tuning the CMYK range and gives you better options.”

The W3200UV uses a high density ink designed by Screen, which can achieve good colour output while laying down a minimal amount of ink. This makes it cost effective over larger volumes of work and Turner was able to negotiate a suitable price for the machine and the ink. 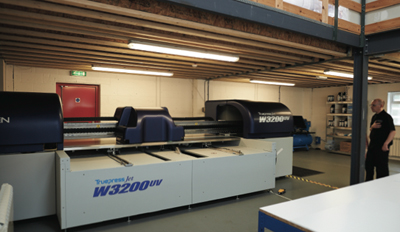 Now that it’s up and running Turner says that the print quality is “extremely good”, adding that all of his customers have been very happy with it. He adds: “We have sent samples to clients and they have accepted them straightaway for quality and colour. Normally people ask for some changes but it’s hitting the expectations straightaway from their artwork.” The W3200UV has only been in for two months but Turner says “We have taken on some pretty big contracts already.”

Indeed, he already has commitments from retailers amounting to several thousand display boards per month, and is planning to move to bigger premises, all as a direct result of having the flatbed printer. The key to this success is having the sort of print quality that his customers are looking for in their point of sale displays, with the productivity to cope with having to print a large number of boards quickly for his retail customers so that the same offers can appear in every outlet overnight, which is a big ask for customers the size of, for example, Pret A Manger.

Indeed, service and support was a major consideration when dealing with large brands, both for the company and its customers. Turner says that the reputation that both Inca Digital and Screen have built up over the years was a big factor in reassuring clients as to what he was doing, noting: “People think you are serious if you have a machine like that.”

Moreover, knowing that Screen had a large service organisation and that the machine was manufactured at Inca Digital's factory in Cambridge meant that help was always going to be close at hand. Turner says that support has been excellent, adding that a remote diagnostic system means that he's effectively got 24 hour support.

He says the installation was fairly straightforward, even though he had to take down part of a wall to slot the machine into place. (There's a space set aside for a table cutter, which will mean another wall coming down shortly!)

Turner is already talking about putting in a second W3200UV but will also consider upgrading to the 150sqm/hr HS version. He's obviously doing something right as he says that each year he has managed to double his turnover, whilst buying all the equipment outright. The W3200UV is the first machine that JCT has had to finance but Turner expects that it will double the company's turnover on its own. 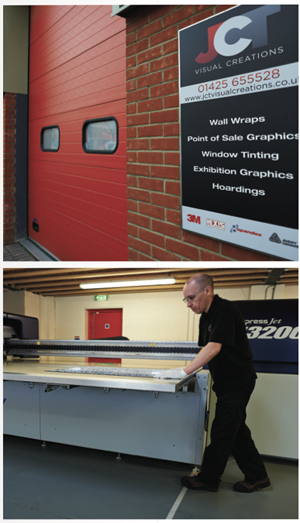 The Truepress Jet W3200UV is Screen’s next generation wide format printer, designed and built by Inca Digital, a subsidiary of Screen. It’s a highly productive UV flatbed printer, taking media up to 1.6 x 3.2 metres and up to 50mm thick. The standard configuration takes CMYK inks but there are four more channels available with options for light cyan and light magenta and/or two sets of white inks. The standard model runs at up to 85sqm/hr but Screen has now announced a new, faster version of this printer, the Truepress Jet W3200UV HS, which will be shown at the Fespa show later this month. Additional printheads mean that this High Speed model is now nearly twice as fast, with a maximum throughput speed of 150sqm/hr. This new model is available with six colours plus two white channels. It also offers customers an upgrade path as the additional printheads can be installed on the standard model to take it up to the same speed as the HS model.