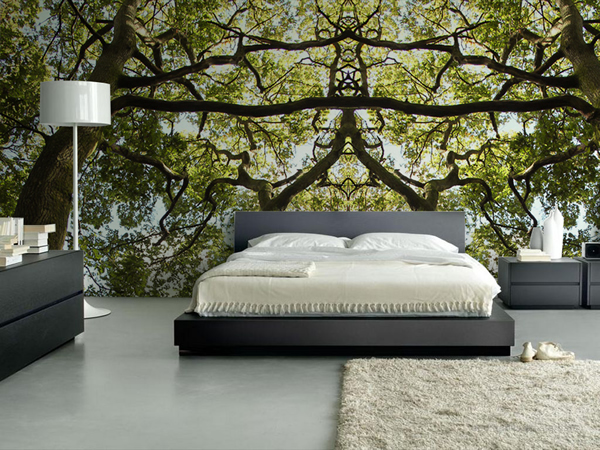 South African designer and photographer Robin Sprong has partnered with PressOn to market a bespoke wallpaper service. Walter Hale talked to him about the evolving marketplace and considers whether it’s worth you taking a punt?

The most famous soundbite about wallpaper is by Oscar Wilde who, while lingering on his deathbed, is reputed to have said: “This wallpaper is dreadful - one of us will have to go.” Until recently, wallpaper is something that Britons have largely taken for granted, it’s sheer ubiquity condemning it to be overlooked. Yet attitudes - a shift possibly inspired by the popularity of style bible magazine ‘Wallpaper’ - are changing and influential South African designer and photographer Robin Sprong, in alliance with large-format printer PressOn, hopes to capitalise on that opportunity.

“There is a worldwide trend for craft goods,” says Sprong, “just look at the popularity of craft beer. People want something bespoke, that they feel they have styled, designed and crafted themselves. It’s the same in interiors. People don’t want to go to the hardware store and select one of the 15 wallpapers they have in stock, they want something that creates an inspiring visual environment.” That desire is, Sprong says, not just transforming the world’s homes, but also offices, hotels and restaurants. “Remember how people felt when they first saw the photographs of Google’s workplace? Everyone said: ‘I want to work somewhere that cool.”

The old school approach to decorating workplaces (and even some hotels) was to stick one small painting in the middle of a wall. Cheap but uninspiring. As Sprong says, “Why not turn the whole wall into a painting with a bespoke wallpaper?” This message has been getting across in countries such as Australia, South Africa and United States where there is a strong, continual reinvestment in infrastructure and new buildings and, Sprong believes, it will resonate in the UK, especially in cities like London which are constantly being renewed.

“What I can’t understand is why more people aren’t doing this already in the UK. The market is underserved,” says the South African, who has a passion for photography and large-format inkjet printing, turning to the latter when he branched out on his own as a designer. (When he

was once asked if he could invent anything what would he invent, he replied revealingly: “A printer that attaches itself to walls and prints anything on a wall.”)

Sprong’s instincts about the potential demand for bespoke wallpapers in the UK were confirmed by PressOn’s own research. The £3m turnover company had been printing wallpaper from client’s own artwork for years but, after investigating the market, joint managing director Nigel Webster and Andy Wilson were quickly convinced there would be a market for Sprong’s wallpaper collection, custom-made photographic wall murals and customised wallpaper designs to suit individual requirements and which can be produced on flooring, glass, metal, wood and fabrics.

What Sprong brings to the table is an artistic vision, international renown and some inspirational content provided by an array of artists, designers and photographers, some internationally renowned (such as the late, great Russian artist Vladimir Tretchikoff, whose works the company has the licence for) and others who are up and coming. Finding the best young talent has been a personal mission for the designer ever since he ran his own photo gallery in Cape Town and his sure eye for gifted artists who just need a break has been central to his company’s success.

The variety of Sprong’s work - and the cachet of the customer names he already has - is impressive. He has created board trees for an Apple store, typographic wallpapers for Paul Smith’s shops (in the UK) and large marine photographs for Oceania, a South African fishing group. As counterintuitive as it sounds, his wallpapers that look like walls - brick or concrete - have found a profitable niche. If you include wallpaper, photography and art, his company has 60 distinctive collections in its range, inspired by everything from to surrealism to Old Masters and hand-printed fabrics.

Sprong realises that every country has its own cultural take on wallpaper. “In South Africa, people used to laugh at it, it was something their grandparents had. That has changed. In Britain, traditionally, wallpaper was about strengthening walls and insulation - so the walls didn’t feel cold if you touched them in the winter. That’s changing too.” He has a point. The right visual environment can engage workers and enthuse customers. In South Africa, his wallpaper designs have even enlivened a healthcare company’s call centre. And his UK debut may be perfectly timed. There is, after all, plenty of interior space in this country that would bot impress Oscar Wilde.