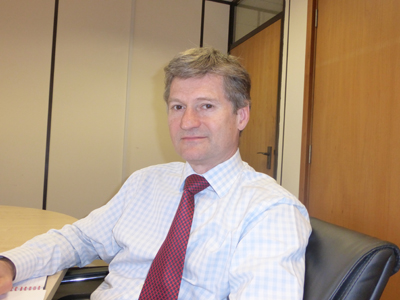 Why Amari Plastics is searching for talent from outside the print sector, and seeking graduates in particular.

You have to be something of a sleuth to find the Amari HQ in Weybridge, Surrey. CEO Andy Carroll is rather proud that the building - Holmes House in Baker Street - is low key. The entrance is sandwiched between shops and easy to miss, but as Carroll points out, “We don’t believe in big HQs and bureaucracy; it all ends up being just a huge cost. What attracted me into this job was Amari’s healthy business model. Although it has around 400 people in total the HQ is really a service centre supporting 28 profit centres.” And now Carroll, who joined Amari less than two years ago, is hoping the company will attract other new talent as it continues with a fairly large-scale recruitment plan.

In 2013 Amari took on 80 new staff, and this year it aims to find at least that many again. Attracting people from outside the print sector is a key focus for the company, which Carroll describes as “cash rich and debt free, so our growth is only constrained by our vision.” Part of his vision is to grow and improve the graduate programme that Amari introduced in November 2012.

“There are so many levels of change taking place in terms of print technology and print integration that you constantly need new perspectives,” says Carroll. “Which is why we’re keen on getting new talent in that can make what could be perceived as a threat into an opportunity. The idea behind the graduate programme is that we build up a pool of smart, motivated and mobile people who are looking for a real career path.”

He is careful not to dismiss the attraction of also recruiting people already within the print sector, pointing out that about 60% of those recruited over the last year or so have relevant industry experience, while the other 40% are print virgins.

“Experience and inexperience both have their pros and cons,” Carroll stresses. “Whoever we recruit we want to make sure they have drive and commitment. Attitude and initiative are what we’re really looking at.” 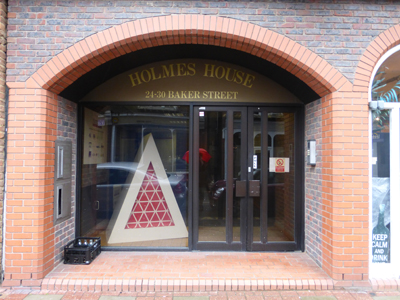 Having controlled multi-million pound marketing budgets in his time before Amari - as Chevrolet UK managing and subsequently as chief operating officer of online car retailer oneswoop.com and in his position as European sales director, commercial vehicles, General Motors – Carroll himself has some knowledge of the print market and recognises that as online/offline communications converge the shape of the industry will continue to change. “What Amari saw in me were transferrable skills that could be used in running a company, which is why they wanted me on board,” he says. “Now we want all of Amari’s sectors to benefit from a recruitment drive and so we’re looking people with the right mindset.”

A focus for the 2013/14 recruitment drive is sales. Carroll explains: “Amari is an umbrella identity for a network of fully owned businesses, which means we all benefit from the scale of operations, but every profit centre makes its own decisions and the managers run their own show and are incentivised to make profit. But we became aware that we weren’t sufficiently in day-to- day, face-to-face contact with customers so we’ve been ramping up sales across all three of Amari’s business sectors: signs/display/graphics; building/construction; and general engineering.”

About half of the new recruits so far have gone into the signs/display/graphics side of the business, which launched a new sector specific identity at Sign and Digital UK - Amari Signs, Display and Graphics.

Now attention is back on the graduate programme, and Carroll admits the company has learned lessons since it was initially rolled out towards the end of 2012. Three graduates were taken on then but only one has remained and is with Vink, an Amari company selling digital screens. Another five graduates started the programme last November and Carroll is hopeful of a better retention ratio. 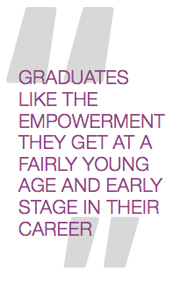 “It’s very early days, so we’ll see what happens but we think we’ve already made changes that will encourage the graduates to stay on board with us. We have learned for instance, that it might be better to allocate each graduate to one profit centre. Initially we had them working across three profit centres in the first year, doing block release on warehousing, administration, sales etc. But the centre managers and the graduates themselves seem to prefer getting to know one business inside out so we’re trying that this year.”

But how does Amari reach what it considers suitable graduates in the first place? Carroll explains that it uses a company called Pareto, a graduate recruitment agency that works hand in glove Amari to handle the initial search for candidates, screening and pre- interviewing, and shortlisting. “We then have a grueling assessment programme that we have jointly worked out with Pareto,” says Carroll. He adds: “We brief them very well so they understand exactly what we want – graduates that are interested in business and who are natural salespeople. We’re looking across all disciplines, but we need them to have shown initiative, set themselves goals and have a can-do attitude.”

Carroll continues: “Pareto have a set of criteria from us. Importantly we want to see a drive to sell in the graduates we take on. The first time around we weren’t explicit enough about that. The graduates usually know nothing about print and that’s fine. We just want smart, extroverts.”

The current batch of Amari graduates came through a group assessment day, present at which were the centre managers who wanted to recruit. The upshot is that two of the five on the 2013/14 scheme are at Amari Plastics in Manchester, one is at the Park Royal site and two are in rotation at Glasgow and Southampton. An Amari graduate co-ordinator is in regular contact with them all and five two-day training modules are delivered to them via Pareto too.

“One of the additional?benefits these youngsters bring to Amari is their general computer skills. It’s not a main focus, but they certainly help us out with their IT skill ad knowledge,” says Carroll, who thinks the graduate programme will again be expanded this coming November.

It’s not all about graduates though. “As I mentioned before, we hadn’t invested enough in our people over the years so last year we also launched a sales academy that all the current sales people could ask to go on. It’s intensive training, sometimes with people from outside the print industry. We also set up a buddy scheme so that all external sales people have a buddy from another profit centre which means they share ideas, information, sales procedure etc. And we have a sales forum two times a year to share best practice.”

Carroll ends: “Because we purposefully have a very decentralised approach often new people find managing a profit centre is a bigger, wider job than they anticipated. So it’s important we grow our own talent that can become future managers.

“On the graduate front, we get them interested in us because we can show them that those running our profit centres today are the sales managers of yesterday – so they can see there are real opportunities.

“We have as sister company that has been running a graduate programme for eight years and it works very well for them. They have at least ten profit centre managers who came through the graduate scheme. One of the things those graduates like is the empowerment they get at a fairly young age and an early stage in their career.”

Ricoh introduces Anything in Print podcasts

Number of remote working roles in UK more than trebles

Number of remote working roles in UK more than trebles