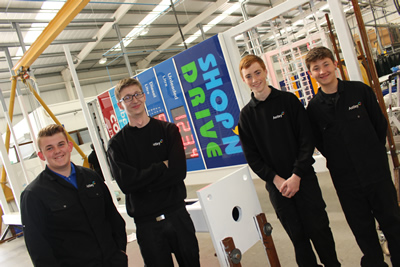 Forget Cilla Black. This is Astley’s messaging to the bright young things it wants to attract to its in-house Trainee Development Programme. Here’s how it’s managing to catch their attention.

Until a rebrand in 2012, the large-format print arm of the multi-sited and variously named Astley group of businesses was better known as Jigsaw. But then the pieces were carefully put together, so that the £10.5m turnover group became clearly recognisable as simply Astley. It’s a move that commercial director Gavin Redhead believes is helping the North East Business Awards 2014 finalist reach the new talent it is eager to engage.

“We recognise that we have an aging workforce, but we’re not in an industry that naturally attracts. The 2012 rebrand means we’re now seen in a whole new light,” says Redhead, who points out that over the years “we’ve had a few attempts at getting apprentices, but we’ve struggled to get the right people and find the right college-based apprentice schemes etc. Basically, we’ve found that whole route difficult.”

So the company changed tactics along with its branding. “In the last 12 – 18 months we decided to make a strategic effort to market ourselves better,” says Redhead. And that included a remit to Lindsay Burnham, who had joined the company towards the end of 2011 as a marketing specialist, to help find bright young things for a bespoke training and mentoring scheme. As part of that remit she started looking a local training companies, such as Tyne North Training, which offer apprenticeship schemes across many types of businesses.

“Lindsay talked to these training companies in a different way, telling them more about the clients/brands we work with rather than saying we’re a print production company,” says Redhead. Burnham explains: “Basically, I talked to them about aspects of the company that I thought would attract 17-year- olds.”

One of the youngsters attracted was Astley’s current junior marketing assistant, who’s on its Trainee Development Programme launched at the end of 2013. This is not an apprenticeship as such, but a tailor-made programme to suit the group’s requirements. “We need new talent in the areas of production, CAD/Design, finance and estimating,” says Redhead. “We set out to get ten people on board, and so far we’ve taken on six, plus Jess, the marketing junior we’ve been talking about; three chaps who started mid-May, and another two who started in mid-July – all in production; and another who started in August on the design side of things.” 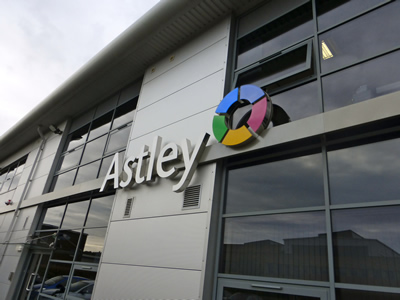 These trainees have not been ‘recruited’ in the regular fashion. “When we started looking for people we didn’t say there were ten jobs. We wanted applicants to think there was only one job. We went about recruiting those with the most potential by using the local paper etc, but a focus was on Facebook, which Jess helped with, and showing off our dynamic customer base,” stresses Burnham. “We said Astley was a brand implementation specialist looking for confident and determined young people to join its Trainee Development Programme. That we were a leading name in the delivery of signage and large-format print to a range of blue chip clients including Sainsbury’s, Hilton, The Co-operative and Cancer Research UK. And that the Trainee Development Programme offered opportunities across the whole business including production, finance, graphic design and estimating.

The online ‘ad’ went on to say: “OK now the serious stuff, you must have 5 GCSE’s graded C and above or equivalent including mathematics and English, and be able to reliably travel to Team Valley, Gateshead on a daily basis. If you have an outgoing personality and a professional outlook then why not get in touch? We would like to know what you have understood about what we do, why you think you would be a great addition to Astley and one thing that you can bring to the business that makes you stand out.”

That was the first hurdle for wannabe trainees, and the thinking within Astley was that if it got only one suitable response it would only look at that one applicant – not take ten at any cost. Those that made that first cut were invited to Astley for an applicants’ open day, were shown around and given talks on how various parts of the business worked, before being asked where they felt they would best fit in. “From that we made our selection, as it became quite evident who we thought would make the grade,” says Redhead.

He explains: “The reason we worked it this way was because we wanted to get enthusiastic people with the right attitude. We weren’t wanting to fill specific gaps in our staffing – it’s not as if we have a need to find people to fill roles that are impacting our day-to-day operations and need an immediate fix - but the aim was to attract youngsters who we felt would help us take the business forward. So it was important we created the right buzz.”

The youngsters who embark upon Astley’s training programme learn about the whole business, so they can make an informed ecision about where they see a career path. “Most of the trainees we have at the moment have expressed an interest in production, which is why that is where they’ve started. We’ll make sure they work across all the various print production departments so they see what suits them best, and we hope that after 12 months we all know where that will be. It’s about skilling them for a career – we want them to stay here for 20 years,” laughs Redhead.

He admits it’s early days for the scheme, for which the group is recruiting on an ongoing basis. “We won’t take on ten people a year – we still need to reach our first ten. But we want to make sure we continue to attract the right people, and don’t close the door on those that would be good for the business. So it’s not about advertising for a job, filling it and closing applications. It’s about making sure we leave the door open and continually beckon to people to step through it.”