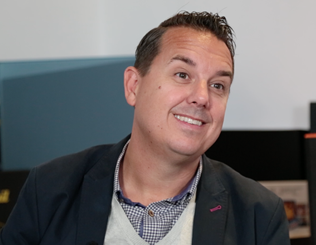 Callprint is on the acquisition trail, and looking for companies with large-format print and project management capability, with a turnover in excess of £3m, and with room to grow. Callprint itself, formed in 1992 as a repro and print operation, currently employs 170 staff at 20 branches and has a turnover of over £12m. Its intention is to grow sales to £25m in the next two years. I met with MD Steve Cheek to find out what part wide-format plays in this strategic development plan.
By Lesley Simpson

In June last year Callprint rather quietly formed Jupiter Visual Graphics and has more latterly put its head above the parapet and announced very ambitious acquisition and growth plans, notably in the large-format space. Put simply, why now?

Callprint has been in business for 22 years now and we’ve quietly grown from one location in London to 22 within and outside of the UK. For the last five or six years the country has been in recession. During that recession we had to consolidate the business and look strategically at where we wanted to be and the clients we wanted to deal with. As we were coming out of recession we looked closely at where our investment should be, and wide-format was one of our choices.

We were fortunate enough to know Ben Moss, who’s joined the business as shareholder and director, and in working together it seemed to make sense to announce a specialist wide-format division. Because he has extensive knowledge and expertise in that market he’s been influential in bringing across a whole team, identifying the skills set and equipment we need, and acquisition opportunities.

To make the best use of what we have we felt we had to re-announce ourselves as Callprint, with the infrastructure and long standing expertise we have in place, as well as the new expertise and capability we have with Jupiter Visual Graphics.

Your chairman Alan Cheek said the aim is for the company to be viewed as “the leading one-stop service provider for large-format, digital and 3D print projects, of any size, and in all areas.” That’s a big ask. Where’s the money coming from? And, where is it going?

As you say, my father started Callprint 22 years ago. The policy has always been to reinvest back into the business. It has not been a lifestyle business, it’s always been about putting back in terms of acquisition, equipment and most importantly staff. We have a can-do group of people and initially Jupiter will utilising the existing infrastructure, which is significant in terms of locations and equipment. We also have a great selection of partners that we’ll be using, in terms of some outsourcing requirements and in identifying where we need to invest in terms of equipment.

We have built up a good resource internally by reinvestment back into the company, and we have a fantastic relationship with our two banks and with manufacturers. So a combination of all these should give us more than enough opportunity to take advantage of the right acquisitions, equipment and staff.

When you announced your acquisition plans in November 2014, you said the intention was to “reshape Callprint in an evolutionary way”. Can you expand upon what you mean by that? I think the view is that wide-format is for us a brand new market.

We are working in parallel markets of course and understand parts of the wide-format market, but the company has grown to £12m and we’re looking at significant growth on that down the line. Wide-format will play a major part in that, which means we have to look at the structure of the business to accommodate that market without affecting too dramatically what we’ve done previously. Obviously, our existing client base is very important to us and we need to maintain the quality we provide them, but we want to carry that across into a new client sectors we’ve identified as retail, sports and outdoor events. The Jupiter team will help us do that in tandem with our existing infrastructure. So it will be evolutionary not revolutionary.

So can you just explain how exactly wide-format currently fits into the Callprint picture especially given the recent formation of Jupiter Visual Graphics?

When we set up Callprint the intention was to support the whole of the UK. We have three strategic hubs already in place at the moment – London, Birmingham and Liverpool. Those three locations have already seen investment in terms of wide-format equipment and the Saffron Hill site in London will become our central wide-format centre; we’re currently expanding our Birmingham operation from 6,000sq ft (557m2) to 12,000sq ft (1115m2) to accommodate more wide-format kit; and our Liverpool site already has wide-format kit in place.

The Jupiter team will use that infrastructure, which is really the spine of the business, with other smaller corporate locations dotted in and around those hubs.

You have stated that Liverpool is to become a large-format hub for the north, and that you’re investigating the possibility of opening an operation in Manchester. What’s your rationale there?

Callprint has always seen itself as a national business, but the north west is a key area for us – both as Callprint, but also in terms of opportunity in operating as Jupiter Visual. As we discussed, the Liverpool hub is already in place and that provides services across the north west but we are looking to expand that into a central Manchester location as well. In additional to that, the next phase will be Leeds, to form a north west triangle where we see significant opportunity over the next five years – especially in regards to the H2S rail project.

Also, we handle national contracts, but we are finding we need bases specifically in that region to fulfil some of those. It’s vital to be in certain geographical territories.

What are your overseas intentions? You’ve flagged up the fact that Jupiter will use the facilities at Callprint’s Dubai operation and that there’ll be an alliance with a New York partner. Can you expand upon that?

Our Dubai operation has been in place for three years now, and was initially set up to support our Callprint operation. There’s a growing requirement for large-format in Dubai, particularly with their win of Expo 2020, and we have the space and infrastructure already in place there so it will be a question of tapping into some local expertise as well as using what we have in London.

Outside of Dubai we have an involvement with two US companies that help us provide services globally, not just in the US. Through those partnerships, particularly the one in New York, there’s extensive knowledge of wideformat and existing investment, and we want to utilise that in support of Jupiter Visual as it expands its service outside the UK, maybe to North America.

How do you expect Callprint to look at the end of this big investment and growth push in two-years time?

Our initial target is to get as close to £18m as we can in year one, and get to £25 in year two. Beyond that the target is to keep on growing. I don’t know if world domination is the plan, but certainly we’re looking to grow the portfolio of businesses we have, increase the opportunities for the people within the business in the UK, and if the opportunities present themselves, outside the UK too.

With the Jupiter side we have an initial first year target of £1.6m in terms of new business sales. In year two we’re looking at a target of £3m, and in year three in excess of £5m. So of Callprint’s target £25m turnover we’re hoping 25% of that will be from Jupiter’s UK position.

Any business acquisitions could make a significant impact on new business growth, and what we’d look to do is seize the opportunities that already exist there – and to actually provide new services to their existing client bases which would improve our turnover as well.

To watch the full interview please visit IRTV at: http://www.imagereportsmag.co.uk/videos/238-talking-point/5685-ir-talks-to--steve-cheek-md-caliprint