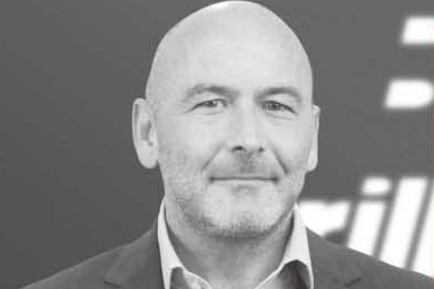 You’ll probably think of ithastobebrilliant.com as Brilliant Media, or just plain Brilliant, or maybe you won’t even know it at all, which is understandable as its founder Simon Tabelin has “wanted it to be the industry’s best kept secret to lend it that air of exclusivity”.

That was an idea that formed with the company back in 2001 but has been superseded by Tabelin’s new plan “to put our head above the parapet and be highly visible and recognised for all we can do”.

It’s a change of plan that kicked off in 2013 when the company moved to its site in London’s Kentish Town from its original home in West Hampstead. And 1 April 2015 is the official “going live day” for a new move that will give the company eight times the floorspace it had when it started. But know that Tabelin is no fool for expanding into new premises again so soon. Two years ago the business comprised four people, at the time of writing it had 18, and by the time of the move there will be 20, with two apprentices in the pipeline. Turnover - standing at £1.8m for the last year - has doubled in the last 12 months. Tabelin expects it to double again in the next 18 - 24.

“Everything we do here has to be brilliant, and that includes our strategy for growth,” says Tabelin, pointing out that the company name change to ithastobebrilliant.com this year is part of that strategy to catch the attention of a new set of potential customers and highlight the company’s cross media offering.

“It’s always been my thought that the company I started could be more than a printer. We’ve always aimed to resolve issues for our customers beyond print, and said ‘yes, we can sort it’ even if we’ve then had to go away and figure out how to deliver,” says Tabelin. “In the wonderful world of sales you never let a client ask for something from someone else if you think you can deliver. You add things into the offer, and before you know it you’ve resolved an issue for them and made life easier, and then you start getting invited to have a discussion and you get the chance to upsell again. That’s how we’ve grown to become a true cross-media company.

“At the start we’d talk to client about delivering little bits of stuff alongside print orders, then it got to the point where we might be involved in handling the catering, hiring limos etc. for events as well as providing print and getting involved in digital media etc. We brain storm ideas and opportunities for clients in house and go that extra mile to make it brilliant. That might sound lame, but it’s what we’ve built our reputation on. Up to now practically 100% of our work has come through referral alone – and customers drove the ‘brilliant’ concept. The jobs we work on often have a ‘reveal’ moment of some sort, and it makes the client say ‘that’s brilliant’.”

Until recently though, only those in the know came the company’s way, “and that was intentional because we wanted to be exclusive and do the kind of work where we could make high margin,” explains Tabelin. “And because we were doing a lot of work with agencies we had to keep a low profile. By 2013 we simply had no more room or capacity to take on more work anyway.”

But things have changed. “Moving to Kentish Town in 2013 changed my perception of how I should run the business. Previously we had been almost a trade supplier to agencies but it was becoming increasingly apparent that we’d developed to a point where we could handle whole campaigns – that it wasn’t just about print, but the whole communications offering. In essence, we had been hidden as middle men. But having increased our kit and capacity, build up a design studio, brought in a copywriter etc., we found that there was an argument for going to blue-chips and corporates directly – not the same ones we worked for via agencies obviously, but new clients. But to interest them we have to have stature and visibility.”

Hence the rebranding, a clever social media/online marketing and positioning programme with well-aimed tone and content for the target market, and personal and specific new business development strategy. “We’ve undertaken lots of research and not just identified companies we want to work with, but actually identified the individuals within them that we want to pitch to. Doing that makes a huge difference in response rates, and once we get in front of people we can show them how we could in effect be their agency at the cost of a production house. They love that because it saves them money and gives us room to develop unusual and profitable solutions. Brilliant.”