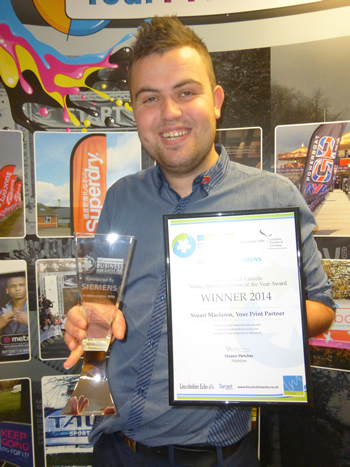 When first interviewed for Image Reports, the then 23 year-old Stuart Maclaren had set-up Your Print Partner in Lincoln just eleven months beforehand, and having spent £70,000 on his first output device - a Mimaki direct-to-textile printer - he was predicting a first year turnover of £600,000.

Maclaren has a staff of 17 and is, by his own estimation, “the third biggest fabric printer in the UK by volume”. The company, which plans to transfer from the current site into a 2230m2 new build space at the other end of Lincoln - close to where it all started in a 65m2 space in 2011 - is expected to bring in £1.5m this year.

“I have big ideas and some people think I’m a cocky little sod,’ laughs Maclaren, adding: “A lot of people in the industry hate me; they think I’m changing the model of how a business should grow and that I’m moving too quick. I get a lot of ‘are mummy and daddy funding you then?’ which is just rubbish.”

“We haven’t actually needed much financial backing because what we’ve achieved has been mainly through internal growth,” adds Maclaren, pointing out that given a 46% increase in like-for-like sales for 2014 over 2013, Your Print Partner invested £100,000 last year on new print and finishing kit, including a 3.2m Mimaki 320 that brought its annual textile print capacity up to 250,000m2 and helped the company release a new range of fabric display products at the start 2015.

That follows the 2013 acquisition of a paper print company that YPP merged into its operations and the addition of a design service in 2014 “to fill gaps in our offering” says Maclaren, who says 96% of print turnover now comes from fabric printing, the other 4% split between PVC and paper products.

But it’s not just about gap filling and volume, though Maclaren admits that he’d rather take cheap work to keep machines running than have them sitting idle, and that “with higher speed and bigger volumes comes better buying power”. Maclaren, who’s background in sports management led him and YPP into the events space, admits to being a bit of an adrenalin junkie at work as well as at play.

“If we’re going to be part of a creative industry, we have to be creative ourselves,” stresses Maclaren. “I want my clients to see that we push the boundaries.” It’s a state of mind that has him attending shows like The Spring Fair and travelling the globe in search of new opportunities, like the Flux Furniture for which YPP is now the official UK distributor. Designed in the Netherlands, every piece is made from a single piece of polypropylene and folds flat into an over-sized envelope shape with just a few simple flips and folds, and can be custom printed by YPP.

“We also have an expo stand dressing and furniture package that you can fit in a mini,” enthuses Maclaren. “It comprises a fabric tension system, tablet and literature stand, a table and two chairs. We did a run through and it took our lady 20 minutes to set up the whole stand. And a whole set of new graphics costs just £90 and you then have a whole renewed stand system! That’s the kind of thing clients want – a total, cheap and easy package.”

But he admits that his enthusiasm sometimes outstrips the market’s readiness for products he wants to bring to the UK. “In China for instance, I see so many great possibilities about what can be done re. exhibition stands. But the UK is not always ready for stuff that really pushes them somewhere new. I get very excited about creative ideas but I’ve realised you have to really judge how something will be received and when the time is right to bring a concept to market.”

One of the concepts going down rather well is the Made in Britain marque that YPP puts on all its print and display products to help promote British manufacturing in the UK and abroad. All the staff wear Made In Britain pins too.

“The UK events and exhibitions markets are huge and fabric print is the backbone, so we’ll concentrate on that market and use textile print to bolt on other items… but maybe we’ll open an office in Europe too,” says the still very ambitious Maclaren, whose business interests stretch beyond YPP to include directorships or partnerships at Event Ts and Castlemaine Accountancy.

But it’s not all about financial gain. For instance, last Christmas YPP took 200 presents to children at the local hospital, and the company sponsors various local events and campaigns. “It’s about showing we’re local supporters. I don’t think these things bring in work though they get coverage in the media which does us no harm,’ admits Maclaren, who sees that the high profile does however bring increased competition.
“There are lots of copycats appearing, which annoys me after I’ve done so much R&D and that does bug me. But I’ll always look to do things a bit differently – I think the industry needs changing up!”