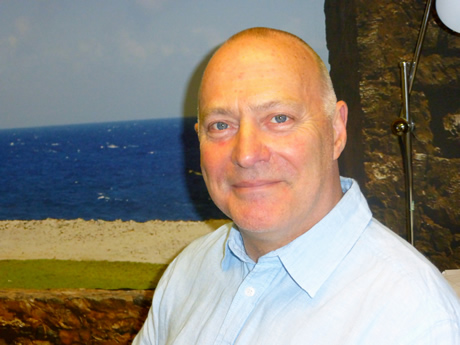 “I’ve never wanted to own a big company; I want a small company where I know what’s going on but that punches above its weight. My philosophy is to keep one step ahead of the competition in terms of technology to do that.

We’ve had to reinvent ourselves as a company over the years and we’ll have to continue to do so, and that means embracing technological change and investing at the cutting edge. We are proud to say we’re a technological-led company and that we sell ourselves on the kit we have,” says Tim Hill, managing director of £2.2m turnover Speedscreen in Maidstone, which he co-founded back in 1986.

That’s not a sexy message to market these days, but one that attracts the clients Speedscreen has so far relied on – the trade, though there’s change in the offing there too.

“A lot of print companies have clients that don’t care what kit they have as long as the job gets done. Their websites are full of galleries of work they’ve completed and that’s how they attract new work. But as a trade printer we can’t do that, so we have to shout about our equipment and the capabilities that offers,” explains Hill, who will be scouring Fespa 2015 for kit “that will give us that extra edge”.

“A lot of our clients come to us because we have the kit we do. We invest a lot for a smallish company and that has led to a stable business, where the books balance, and with capacity to grow.” It’s a strategy that has seen Speedscreen switch from being a purely screenprint facility in the 80s and 90s to a screen/large-format digital hybrid, and that will see it evolve from being a trade only business to one that handles more direct client work in the near future.

“The capabilities of our kit have revolutionsed how we work and what we can do. Reinvention is something we’re used to and I’m aware that going forward we can’t rely on trade work alone – there’s better margin to be had on dealing with customers direct to be honest. As

other PSPs invest in the type of technology we’ve been the first to buy, they will not come to us, so we have to keep looking at how we stay ahead of the game.”

Speedscreen has spent more than £2m in digital equipment since it entered the space in 2006 with a Durst Rho 205 flatbed/roll-to-roll hybrid printer which it bought secondhand “because a new one was too expensive but I could see a way forward using this machine for very short run four-colour jobs” says Hill.

Hill is still a proponent of screenprint, talking about again investing in the technology now that so many players have quit the scene and given its synergy with digital print. The company that one had three screenprint lines now has two, its focus having shifted towards digital once the Durst Rho 205 “opened up a whole new revenue stream”.

Three years later Speedscreen, then with a turnover of around £1m, ploughed £360,000 into a Durst Rho 800 because Hill wanted a dedicated roll-to-roll machine and “was blown away by the level of engineering seen at the Durst factory.” Eighteen months later, in 2011, his hand was back in his pocket for another Durst, a Rho 320 (at which point the 205 went).

“By 2012 we had two Durst machines and three screen lines but we could see screen was in decline, and our digital kit wasn’t really quick enough, so we had to do something drastic,” says Hill, who decommissioned one of the screen lines and did what he does very well, invested in yet more technology – this time a European first in the shape of a Durst Rho 1012.

“It transformed what we can do, doing in a morning what it had taken us a week to do, which meant we could reduce prices and still have a better margin. And we could take on jobs of a print quality and turnaround that we couldn’t have touched. Plus, people came out of the woodwork when they knew we had it – and having our name of the printer at its launch at Fespa did us a power of good.”

Investment has continued, with Speedscreen being one of the first to buy an Esko Kongsberg C64 cutting table last autumn, which now runs alongside existing Zund cutters to meet the increased throughput from the printers and open new revenue streams such as corrugated FSDUs.

“From my point of view, the important thing is to invest in a technology where you think there might be an opportunity – don’t wait for the market to push. I keep my eye of all technological developments, and I’m the UK member of GIGA to keep abreast of international trends, and the choices I make tend not to be about immediate demand, or what it costs, but about what it can offer us in terms of market edge – that pays dividends in the long run.”

A sense of purpose