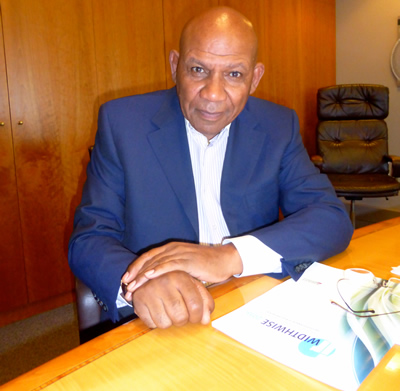 Las Barrow keeps his poker face when asked what he thinks makes him a managerial ‘Leading Light’, which he undoubtedly is having turned a £2 stake in a new business venture back in the mid ‘60s into the £53m turnover Augustus Martin of today.

Then there’s his co-ownership – with his Augustus Martin joint founding partner and joint managing director Barry Dix – of Manchester-based Walkers Instore and London-based TJ Finishing, plus two-thirds of inks business Small Products. And at getting on for 70 he shows no sign of letting up, having latterly overseen the new Augustus Martin set-up called Audit, Fix and Display.

“They’re all operations managed by people who can do so without me,” laughs Barrow, who shrugs when asked what leadership qualities he thinks have made him such a high-profile print chief. He puts much of that down to his Fespa involvement, having been on the board since 1991 and twice president, the second term having just finished with Fespa 2015. But he remains on the main Fespa board, and that of Fespa UK Association.

“I don’t work at being a public face of print but Fespa has definitely helped do that,” says Barrow, adding that he’s always also been sales/customer facing and wide-travelling, continually meeting other business leaders both within print, and without.

“As a manager you need to understand what’s happening around you, and how developments could or should impact upon your own business. Normally, if you try and talk to a company that’s not in direct competition with you they’re happy to talk. And within print it’s important to keep benchmarking yourself.”

So how does Augustus Martin shape up? Well, Barrow and Dix’s initial total £4 (£2 each) investment in the homemade print table that now famously kicked off the company, has since morphed into one of the industry’s largest and best known providers of print (screen, litho, digital) as well as associated services (including its twenty:22 creative design service) for the retail and outdoor markets, with around 325 staff at the London base and 45 in Manchester, plus new teams around the country serving the Audit, Fix and Display operation based in Milton Keynes. And then there’s the Graphics Communicators joint venture based in Brussels.

“When we started that wasn’t our business plan,” says Barrow. “We had no plan, other than to test the waters and see how we did because we thought it would look good on the CV. We could do that then because we were both lived at home and had no responsibilities.” But Barrow did have print training and entrepreneurial spirit, both of which he believes are core to starting up a successful print business.

“There’s lots of discussion about printing company owners and whether they have the right management training etc. The fact that they have set up a business at all means they have a certain something that others don’t, and I think that business training is second to that entrepreneurial drive. And if you’re setting up a print company I think it’s crucial you understand at least the basics of how to print. OK, so you can get a print off a large-format inkjet printer easier than you could an offset machine or with screenprint without much training, but you still need to understand what you are building a business upon – know what you’re doing and have the ability to think of different ways of doing things. That’s what we’ve done at Augustus Martin – found better ways of doing things and invested to make efficiencies that benefit us and our clients. You need to understand the technology to be able to do that.”

Asked about his investment strategy Barrow is clear that it’s an area where he does not gamble. “No, I don’t take risks. I think it’s a mistake to buy a machine for a market you’re not already in or without the work to fill it. That’s what happened in the early 2000s when lots of companies bought large offset presses – not to become more efficient but to enable them to get work they didn’t already handle. But it didn’t always come. And then they had an almighty cost to bear. In digital large-format these new big flatbeds are costing £1m, plus there’s maintenance contracts etc., so still a hefty cost to bear if you can’t fill it. Maybe, if you already can fill 50% then it’s a chance worth taking…

“We talk about diversification but isn’t that what we’ve always done. Do we print all the same products for all clients – no. It’s about making sure that people are fully aware of all you can do – and not just from a technical perspective, continues Barrow, adding: “Twenty years ago we had a narrower print space so educating the market didn’t take so much time and effort. Now it’s a key issue.”

And he’s also seen a “complete change over the years in how we deal with clients, which has necessitated a change in the type of people the company employs. “Clients may not be so skilled in how we do stuff, but they’re more skilled in knowing what we can do for them. So you need people who can talk with them on their terms, so we make sure we employ the kind of people our clients employ. Say, if we want someone to deal with marketers we’d rather employ someone with a marketing background and teach them about print that the other way round.”

And Barrow is clear that as the company grows, you must also employ people to whom you can delegate. “You need people who get things done. I surround myself with people that have that attitude and it’s worked for me.”