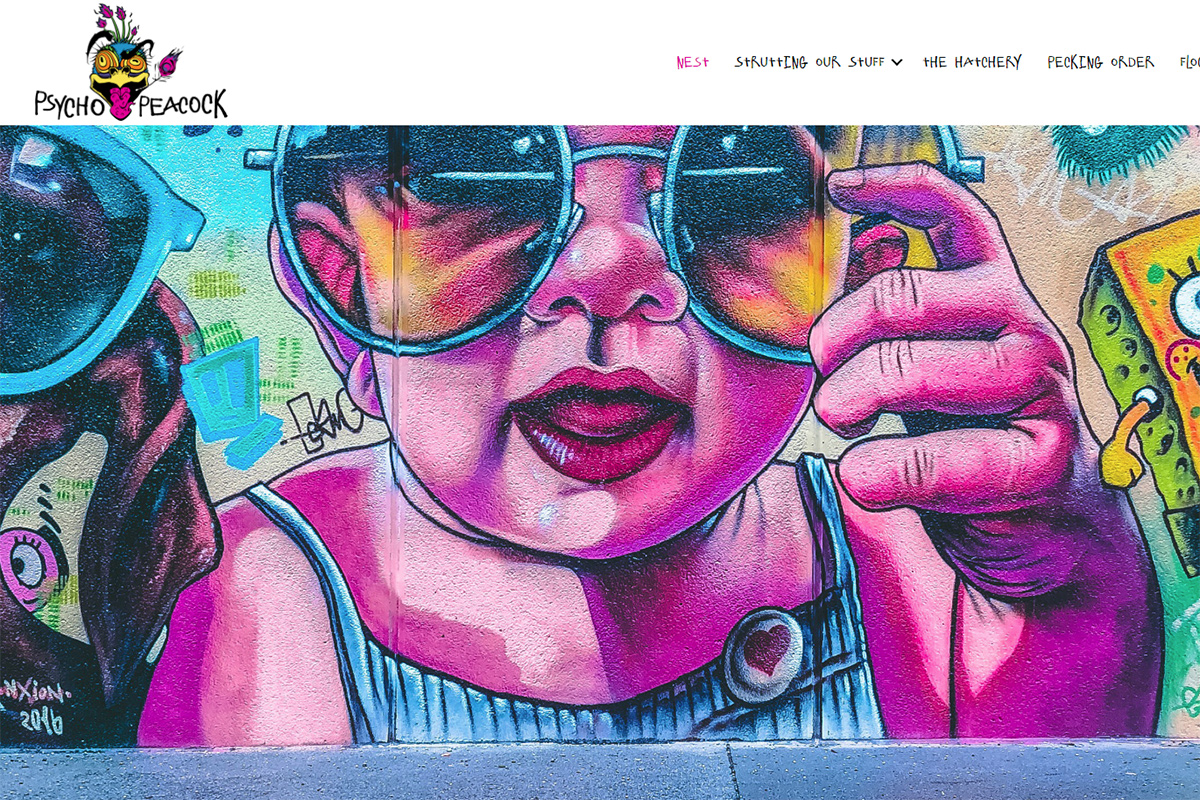 What’s in a name? Psycho Peacock’s MD thinks there’s a whole lot, which is why he’s thrown everything at the company’s whacky rebrand. Could your business benefit from a similar approach?

What’s the name Funky Pigeon got to do with greetings cards? And what’s the name Psycho Peacock got to do with print? Absolutely nothing. And that’s the point. “We want to bamboozle people and get them Googling who we are and what we do,” says Simon Higginbottom, MD of the £3m turnover Manchester firm, currently moving from its original location to a newly fitted out site 15 minutes down the road - one that will be a better home for the expanding, rebranded business.

Until March 2019 Psycho Peacock was GBM - the initials of the company’s founders - which two years before had been bought-out and amalgamated with the new parent’s other acquisition, Contact Photographic Services (CPS). Staff from the latter - which was based just about a mile away - were moved to the GBM site, with the GBM Group providing print, joinery, electrics services to largely local clients. When Higginbottom, a director at GBM, became MD of the enlarged operation he saw a chance to revamp and reenergise it.

“From day one I was always looking at rebranding because we had amalgamated a large customer-base and it was confusing. Plus, we had a good name for ourselves around the M60 area, but beyond that no-one had really heard of GBM,” he explains. “We wanted to make our brand more recognisable nationwide - something more modern and off-the-wall that would stick in peoples’ minds. We also wanted to make a visual impact and get people talking.”

It’s done that as Higginbottom himself regales: “Around here we get greasy spoon vans and I’d been going to one of them for about 20 years when the lady in it asked me why we’d changed our name and style and what did we do? In all that time she’d never once asked me about GBM. But our name and visual branding is making a stir and that’s what we want - people asking ‘Who are you’.” 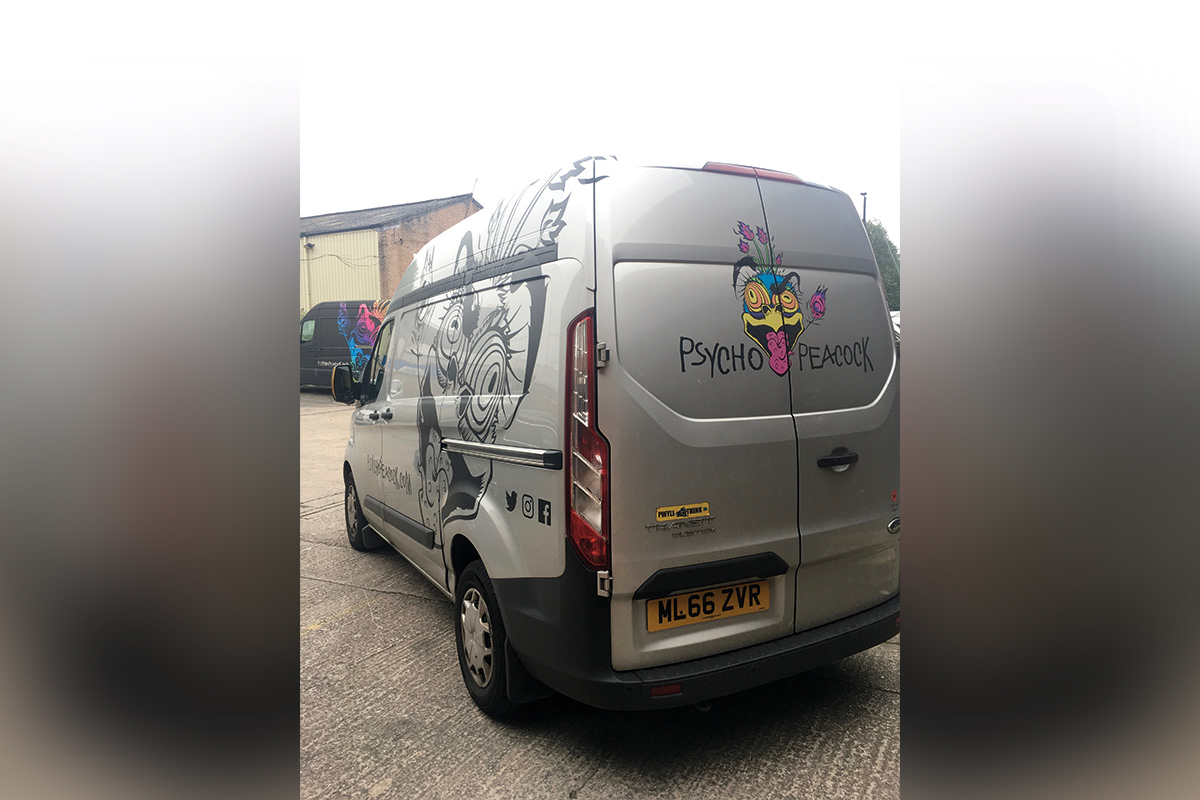 Just take a look at the company’s vans and website and you’ll get it. The mad bird logo across Psycho Peacock’s transport fleet certainly makes heads turn. Go to its webpage and not only do the stunning, whacky visuals continue, but the bird-based creative theme continues with drop down menus like ‘Nest’, ‘The Hatchery’, ‘Pecking Order’, much of it - but not all - created in-house. And that’s at a company that doesn’t even have a proper marketing team.

“We’ve never had a marketing department, either internal or external, but now we are getting better know we can’t just sit in our nest, we have to keep hatching new plans, so that might change,” says Higginbottom, who takes pride in having personally come up with the company’s new strapline ‘Thinking Beyond Print’.

“That was my idea, because people aren’t coming to us for ‘print’ but for a ‘service’. A lot of what we do goes beyond print - consultancy, joinery, electrical, making it all happen. It’s one of the reasons why we took the decision not to have ‘print’ in our name. The word ‘print’ itself has connotations that don’t necessarily align with what we are or how we want to be perceived. We are in a creative sector and want to showcase that,” stresses Higginbottom. >

That was key to the brief given to specialist branding agency Blo after holding a workshop together on the company’s focus and aims. “They came up with a list of possible names which we dwindled down. They worked up some branding around those and we chose Psycho Peacock. Blo came up with the logo and some brand guidelines, after which we changed all our marketing materials, vans, website etc. - did everything from scratch.

Higginbottom says the switch from GBM to Psycho Peacock branding in total took six months, with an internal team providing input and a freelance website designer handling the site relaunch, ”which only took about three weeks to be up and running from the time of providing him with our brief!”.

The focus now is on the business’s relocation and expansion. Since the takeover of GBM more than £120,000 has been invested in new production kit, including an Oce Colorado and Jetrix IR320 (the 100th Jetrix sold in the UK) large-format printers. At the time of writing a new Zund cutter was due for installation, to replace one of the existing two, and another two printers are in the pipeline for next year - one likely to be a dye-sub machine to meet Psycho Peacock’s move into fabric printing.

“Before the changes GBM was about 80% retail focused,” says Higginbottom. “But retail is in difficulty, so yeah, we have been thinking about other growing markets. Exhibition/events is probably about 40% of what we do now, museums another 5-10%, and retail the rest. Our widening focus hasn’t necessarily impacted our rebranding ideas, but the rebranding itself is definitely helping us make more of an impact.”

So how do you measure the ROI of such a move? By the number of new clients? “Well, about 10% of our clients have come on board since the rebrand,” says Higginbottom, and we’re getting many more hits on our website – we know because we’ve got somebody monitoring that for us. In terms of turnover it’s still early days to say how that is going to be affected, but interest has certainly increased.”

Some of that interest could be put down to Psycho Peacock’s decision to strut its stuff more publicly too. This year it exhibited at Confex North, a show for the conferencing sector. Higginbottom says it is also considering taking part in a family attractions event.

“I think we need to get ourselves out and about a bit more. Some of the shows are just not cost-effective to attend, but some other niche ones are. We took on two new clients from the Confex North show alone. When we put our stand up people kept coming over and saying ‘we have to ask what you do?’. That was all because of the logo and artwork.”

Psycho Peacock’s will also splash the eye-catching branding all over its new production site, “something that was always in the plan from the amalgamation,” says Higginbottom.