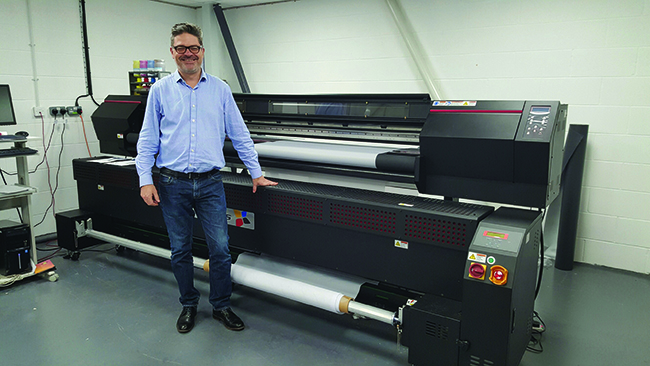 As more PSPs move into the textile print, Northern Flags is looking to grow business by going the other way – by moving into the more ‘traditional’ large-format print spaces.

“We’re not just northern, and we’re not just about flags.” So says Northern Flags managing director Iain Clasper-Cotte, which is why the diversifying Leeds-based company - 75% owned by Europe’s largest printed fabrics supplier Faber Vlaggen (Clasper-Cotte holds the other 25%) - is in April launching FaberUK.

As Clasper-Cotte explains: “FaberUK will be the trading brand for our larger clients as it is a far better reflection of us. Northern Flags will continue dealing with the smaller orders. Basically, it means we’ll have two separate brand identities under the same ownership - with different sales and account management teams.

“The old name has a lot of heritage and is recognised among clients as one of the leaders in a specialised area, so of course we’ll keep that. But we’ll be making changes, like adding an ecommerce functionality to the Northern Flags site as a way of becoming more efficient on the smaller orders.”

Building that Web-to-print functionality is just one of many innovative ideas being put into practice at the company, which only this past January re-established a UK large-format print and finishing operation after an eight-year hiatus in which it had moved all of its production to the group’s specialist digital and screen facilities in Poland and Thailand to capitalise on lower production costs.

“Speed and agility to meet client demands brought us back to the UK,” explained Clasper-Cotte at the time its newly built, air-conditioned, large-format print facility went live at the start of the 2016. Housing a new 2.5m D-Gen Telios Black printer, specifically selected for its ability to deliver excellent show-through for the company’s core flag products, as well as exceptional quality on display fabrics, the operation is also home to a new HP Latex 360 printer, which is enabling Northern Flags to extend its product offering and provide what Clasper-Cotte described as “easy to sell add-ons for our existing textile customers who also want other types of print.” That was augmented in February with the addition of a new second generation Durst Omega machine.

Northern Flags secured European funding to help with the expansion at Leeds, which apart from the construction of the controlled condition production room and new printers included the reequipping of the fabric sewing room and also specialist cutting, welding and packaging machinery.

Interestingly, the investment - which has also led to the creation of created seven new jobs - is not just about bringing textile print back to the UK, but about helping the company grow in what’s the opposite direction to many large-format digital PSPs.

Clasper-Cotte puts it succinctly: “We’re seeing many print companies entering the digital textile print market, which is our ‘traditional space’, so we’re going the other way and diversifying into other large-format digital inkjet products/markets.” Specifically he’s talking about producing “easy add-on products like PVC banners etc.

“Around 90% of what we do now is fabric and of that 60% is flag related. But we are specifically looking to change those numbers by growing what we do in other areas. We expect that fabric will end up as 80% of our output.”

The move beyond textile/flags has seen Northern Flags establish a new pick and pack centre to hold large stocks of custom POS and hardware for clients. And on the staffing front, it means the company is currently seeking client managers that Clasper-Cotte says “have a wider product and client knowledge”, as well taking on as production specialists in the new areas.

Being part of Faber is a great advantage in all this activity and refocusing acknowledges Clasper-Cotte, saying: “The group allows all it’s country MD’s to operate independently to address the needs of their own market, but encourages co-operation as required. It gives us great buying power on the production side, means we can offer client account management across Europe for international clients, but also provides a good forum for discussion in terms of strategy and development. You need to be constantly innovating and re-inventing what you do to stay competitive and profitable.”