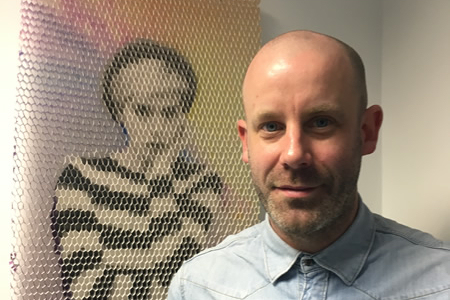 Chris Boyd-Leslie, head of creative development at Oasis Graphics, devotes his time to exploring new inkjet print possibilities. His work is starting to pay off. Here’s how.

When Oasis Graphics bought out Mustard Solutions at the start of the year, it did more than extend its workforce, kit line-up and client list - it allowed Chris Boyd-Leslie to focus entirely on exploring new substrates to develop quirky products for its agency customers. It’s a focus - and an investment - that’s starting to pay off.

“At the same time that we made the Mustard acquisition we also bought an Acuity printer that gave us huge new scope,” flags up Boyd-Leslie who, having been studio manager at Oasis for around eight years before becoming head of creative development, had for some time been aware that “customers were saying they wanted something a bit different.” With the Acuity in-situ and the Mustard team and resources relocated from Maidenhead to the Oasis premises in Cookham, Berkshire, Boyd-Leslie was given the chance to explore the opportunities “that keep presenting themselves if you take the time to pay attention and think beyond the obvious”. And he points out that just weeks down the line the company started winning commercial jobs off the back of the sampling he instigated.

“We’re doing a lot of jobs on unusual materials for Fisher Productions (an agency) - such as printing onto ply and OSB board for example,” says Boyd-Leslie, pointing to various examples of bespoke samples dotted around a print applications showroom at Oasis. “We can print onto things like reclaimed scaffold board,” he adds. “We’ve started doing some of that type of work for agencies. For Miss Jones we’re providing graphics across four scaffold boards wide for an end client that will use them for an environmental branding project.” There are plenty more jobs he could reel off were he allowed to - but, as is often the case, he can’t.

For a company with a staff of 28 and turnover of £2.5m, deploying someone full-time to look into creative development is still an uncommon move, despite all the diversification happening across the wide-format print sector. Boyd-Leslie explains that while he does not have a specific budget for his programme, the company has set-up Oasis Samples through which he ‘invoices’ his sampling “to keep track of what we spend”. All the R&D print work goes through the company’s workflow as real jobs, so that they don’t get bumped off the schedule for any reason. “And now the guys on the machines can see the benefits of what I’m doing. Because they’re pulling in commercial jobs they understand the point,” says Boyd-Leslie. “And because we keep pushing concepts they now get genuinely excited about what can be achieved.”

To ensure he is constantly pushing the boundaries, Boyd-Leslie works very closely with various substrate suppliers as you’d expect. Some will provide free sample rolls of new media if they believe the sampling work he’s undertaking might lead to future orders, others don’t. Some will help with profiling, most won’t.

“I accept that their input only goes so far,” he says. “What we’re doing is investing for the future of the business so there are going to be costs - some that pay off and others that don’t.”

Much of the sampling undertaken by Oasis is client led, in that they request the company comes up with a novel solution for a certain project or end customer.

But there’s plenty of knocking on doors to showcase possibilities too. “I often take project managers with me to clients to ‘sell’ new concepts, because if they take it on board they know they have someone apart from me within Oasis who understands the process and will follow it through etc. - and it keeps me free to continue looking for more new ideas.”

Once a week Boyd-Leslie sends agencies picture samples of new print concepts/capabilities that Oasis has developed, but he’s aware that there’s more to be done to get ideas in front of potential new clients as well as existing ones. Social media is one development focus, but so too is putting its print samples physically in front of people. The company has the 100% Design show in its sights, and putting a pop-up shop in heavy creative footfall areas is high on Boyd-Leslie’s wish list. “Then we need to move somewhere bigger to enable us to extend further,” says the enthusiastic innovator.