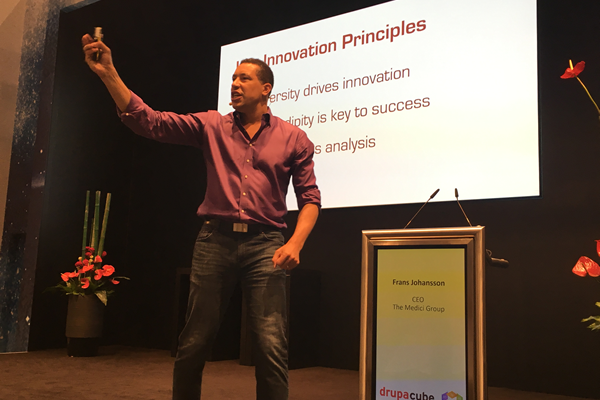 Frans Johansson, author of the ‘The Medici Effect’ and founder of The Medici Group, took the Drupa Cube by storm with his keynote on strategic innovation. Here’s what he had to say…

“The intersections in my life have been really powerful. The print industry if filled with the potential to find new intersection that can power your business.” “So go find them”, was the essence of the message delivered by leadership guru Frans Johansson, author of the ‘The Medici Effect’ and founder of The Medici Group as he delivered his ‘Touching the Vision’ keynote at the Drupa Cube.

His rousing delivery as much as his message hit a nerve with an almost capacity audience - some were overheard a day later at the airport enthusing about the talk and how they could put into practice what Johansson had preached. Hardly surprising - it was a stellar performance. But can what he had to say really be harnessed at ground level? The whole point of his presentation was that it can, and needs to be.

“We know we need to innovate to remain competitive. But it seems difficult to do so. And the more successful we’ve been as a company, the more difficult it seems,” Johansson acknowledged at the outset. “What you have to understand is that there are rules of innovation - but they’re not the same as your usual rules of business. You need to accept that you’re going to have to break those.

“The rules of innovation are this: that diversity drives innovation; that serendipity is the key to success; and that action beats analysis. All things that make you really uncomfortable and break the traditional rules of play. Being innovative requires you accept that some of your understanding and perceptions are wrong. That you open yourself up. That you actually look for opportunities to change the rules of the game.”

Giving examples of how huge corporations like Microsoft had worked these ‘rules of innovation’ in their favour, Johansson came back to the uncertainties palpable in the audience. “I know what you’re thinking: ‘Mine is a small company - I can’t compete with the giants that have massive marketing spends’. So how do you make noise? You differentiate yourself by doing something new.” Yup - got that. But it’s easier said than done. Johansson acknowledged that too.

“I can hear you asking yourself: ‘Where are these brilliant ideas supposed to come from?’ They come from the intersections! From those places where you meet new people and throw around new concepts.

“It’s crucial that you actively break down silos and create more serendipitous connections. You need to make it your purpose to go and create new relationships in other areas outside of your usual scope of work so you can expose yourself to new thinking and new ideas. It’s doing what no-one else has thought of that will make you stand out and allow you to create your own noise.” 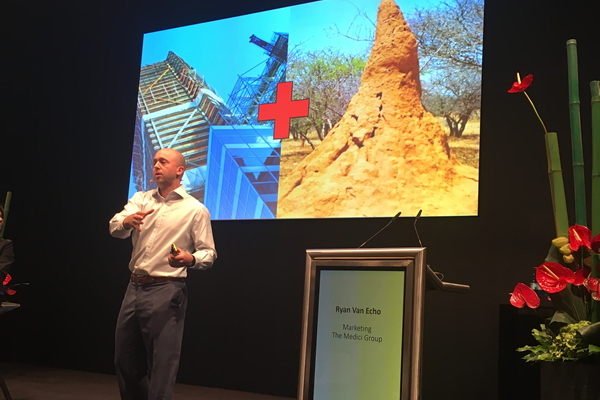 Johansson alluded to a non air-conditioned building in Zimbabwe that remains cool because the architect built it after seeing a termite hill, wondering how it remained cool inside, and after investigation producing his building along similar structural lines. “Print offers up so many potential intersections for cross-fertilisation of ideas - just look at what’s already happening with smart labels on food packaging, or the hotel chain in Sweden offering newspaper printed in the lobby because ‘though guests can read the news online they want a physical product. It’s about stepping into the intersection and throwing ideas around.”

At which point Johansson invited the audience to do just that - to talk to the people around them for a few minutes and come up with ideas for a new business model that could serve their customers. He then invited people to offer up their examples - but the suggestions themselves weren’t the point of the exercise. That within a few minutes they had come up with ideas was. “Can I ask if the randomness of the relationships you have just formed and the speed with which you had to think energised you? I know the answer - I just wanted you to see how creating diverse teams to generate rapid fire ideas provide the right circumstances for something exceptional to happen. The more ideas you have the more chance you have of stumbling upon something great.”

Again Johansson, a presentation pro to his soul, acknowledged the question he’d effectively set up. “Of course you can’t pursue every idea if you are creating large amounts of them - which is sort of the idea if something magical is going to happen. So how do you know what to bet on? Well, don’t do it on ROI or prediction-driven expectations. I see people asking what the ROI is on an idea after five minutes. It’s ridiculous. If you’ve got something really different you’ll have no idea of the ROI.

“Passion is the main thing to focus on. If your people are passionate about an idea they will work night and day to make it work. But be prepared for it not to. You need to allow them to be wrong - their next passionate idea might be the right one so you don’t want to stifle their passion and creativity. The old rule was that you reward success and punish failure. If you are asking people to innovate you have to actually expect mistakes. The new rule is that you reward output and punish inaction - not a mistake.”

But isn’t that a costly business model? According to Johansson, not so. A presentation slide writ his message large: The more money you spend in the early stages of innovation, the smaller your chance of success. What?

“If you put a lot on money behind an idea, those involved get afraid to fail. Then they start thinking safe - death to innovation.”