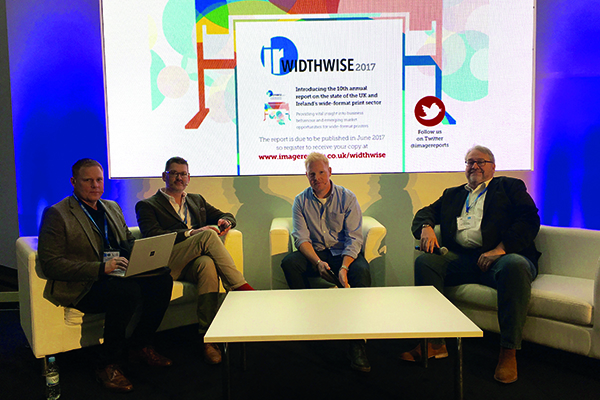 Given this is a milestone year for the Image Reports Widthwise project, we thought we’d use Fespa 2017 for a live debate on some of the key findings of the poll - which though UK based, no doubt touches upon topics and trends impacting PSPs in the sector across Europe and beyond. Here’s what our PSP panel had to say…

A whopping 79.01% of Widthwise 2017 respondents said they expected their large-format turnover to grow this year. Asked about priorities for the period, growing turnover was put first in a list of optional categories by 33.64% of the 243 respondents. Meanwhile, 43.62% reported that wide-format margins were better than those in other parts of their business, with 41.15% saying they saw an increase in large-format margin in 2016. So are you focused on growing wide-format turnover – or margin?

Wheeler: If you do 100 jobs at £100 you’re not going to make as much money as if you did 10 jobs at £1000 with the same margin. So we look at how we can increase turnover without affecting the margin too much.

McCombe: We’ve made some strategic changes over the last couple of years. A lot of our customer base was in the public sector, and for us it’s all about having a sustainable business and getting the numbers right. There were things we didn’t have control over - fixed costs, supplies increases, small percentages that add up, so the whole of last year was about getting ourselves sorted, and to work on the business so we could service the private sector and a trade service.

Collins: There is a tendency to see a race to the bottom. We try to add creative services to what we do to add value for the client at the same time as trying to keep the margin. Pressure has come over the last couple of years with supplies increases etc. The key thing for us is to look at every part of the business and ensure we’re protecting our staff whilst protecting our margin and not going into areas where there’s that race to the bottom.

Courtney: Our costs are fairly fixed so there’s not a lot more we can do but chase growth. As long as you understand your margin and understand your prospects - and I must say that given some of the quotes we see it seems some people don’t! - then chasing turnover is a fairly sensible aspiration.

Asked which markets they would move their own business into over the next two years, 8.23% of those polled said they would get into soft signage, but it’s not looking like they are picking up on the oft flaunted opportunities in printed garments or in textiles for the home/interiors. Other potential areas of diversification like packaging and cardboard engineering showed low level interest too. Do you think too much is made of ‘new market opportunities’ by those trying to sell you kit and consumables? Is there just easier money to be made?

Courtney: The machinery and materials suppliers see the markets in a much different way to the way we PSPs do. For instance, we all have competitors, especially in ‘traditional markets’ but the reality is that when it comes to big one-off jobs the smaller guys can’t compete with a company the size of Gardners. So we still have plenty of business opportunity without having to get too distracted by ‘new’ markets. The suppliers don’t see it like that, but we’re all savvy enough to take our cap. ex. decisions very seriously and I don’t think will be influenced by a machinery salesman telling us where they think there is opportunity if we buy one of their printers or whatever.

Collins: I agree. I’m not going to kick the suppliers, because it’s their job to push the industry forward and do a sales job. Our perspective is different. For instance, the big volume growth in textiles is in areas where we’re not going to compete.

McCombe: I think it’s important to have elements of the industry that guide us by showing us what the opportunities might be. We’re just an 11-year-old company, but we have more disciplines under one roof than anybody in Scotland because we want to make sure people come to us not somebody else. And we’ve intentionally commoditised some of the items we deliver and set-up an online channel to make it easier for customers to use us. Because the workflow is streamlined we can take that £10 job and it makes sense to do so.

Wheeler: We have diversified over the years - the direct to media market we went into at a very early stage, and we’re always looking for the next big thing. We’ve bought into 3D print for instance with a Massivit machine. You kind of have to accept that to go into a new area you have to have the right resource behind it, and that there’ll be a learning curve and failures. You need at accept that money needs to be spent! Take 3D printing - in the main hall here at Fespa there’s a model which is 1.7m high that we produced in three days. That’s kind of unknown in the 3D world, but we could only do it because we’d spent 12 months putting time and money into developing a service that we know will make an impact in an industry we know.

When asked if PSPs expected to add services in various areas over the next year to meet customer demand, creative design led the field by a mile. Almost half of those polled said they would be looking at adding/increasing their design offering. What do you make of that? It has traditionally been an area where PSPs have made little money because they’ve not been able to quantify it.

Courtney: I think print and design go hand in hand. Large-format print is now coming of age, and where it was a niche product it has now become more mainstream so there’s pressure to move it away from it being commoditised and that means adding value beyond the printed product. The most natural way to do that is to add design to your offering. Plus, design moves you forward in the life cycle of a product - that not only helps margin, but it helps lead-times.

Collins: Design has always been a difficult to quantify in terms of how it’s paid for. From our perspective as a trade supplier, more people want us to provide a design service, and are more willing to pay for it. We find that the skill is really in designing a printed product for a specific client or purpose, not in the actual printing anymore.

McCombe: As I’ve said, we have a commoditised W2P offering, but we also offer consultancy services and over the last few months where we’ve looked to grow that in regards to 3D visualisation. Because our online service pushed some of the ‘traditional pre-press’ bits of the print workflow back down to the customer, it means we can now focus more time of more profitable areas of pre-press/design.

Wheeler: We are totally creative at Stylographics - using everything from pen and paper to elaborate software design packages - it gets us through the door early on. There are caveats when it comes to being successful. One of the things we’re always complaining about is how do you make sure you don’t restrict your creative team when it comes to meeting a brief but make sure you they don’t come up with something you may struggle to actually produce!

When it comes to buying a new digital large-format printer specifically, 41.56% said they expected to do so in the next two years - exactly the same percentage who said they wouldn’t be! Are you currently an investor or non-investor, and where are you putting your money nowadays?

Courtney: I think obsolescence has been built into digital machinery over the last ten years, but I think it’s now better quality than in was then and is at a speed etc. that is acceptable. We’ve spent £2m on large-format kit in the last year, and we’ll do something similar again to replace uncompetitive machinery to keep up with the market.

Collins: I don’t see any business in any industry that doesn’t invest year on year. We’ve spent the last two or three years refining the way our business works - in staff and training -  and our investment now is more about spending around the machinery we’ve got - in support services.

McCombe: Out intention is not to invest in terms of cap. ex. this year - perhaps in 12 months time in terms of a hybrid printer - what we’re looking at during Fespa 2017. Software development has been our biggest bag over the last ten year to be honest but our investment focus recently has been on getting apprentices in, training the next level of managers etc.

Wheeler: We’re always on the look-out for the next thing - ink that will stretch for thermoforming etc - things that will take us towards the right future where we can add-value.

Asked if they thought their company would still be in large-format print in another 10 years’ times, the great majority (88.48%) said yes, and two thirds said they expected wide-format print to make up more of their turnover. Does that reflect your own company’s expectations, and do you think the sector will look anything like it does today?

The panel: I think ten years ahead in this industry is impossible to predict!