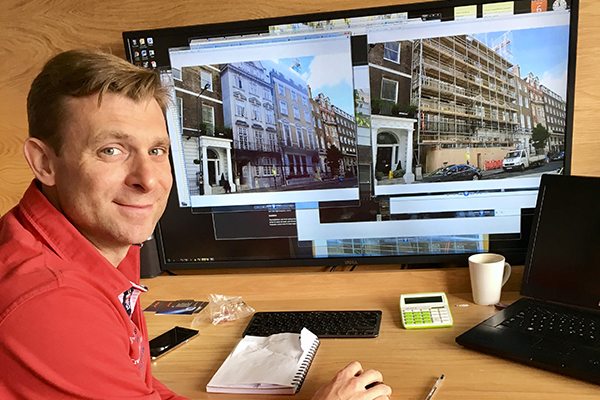 Fancy working three days a week, from home much of the time, and still turning over £250,000? That’s what Justin Murray is doing, having swapped the grind of running Pyramid Visuals to become a specialist large-format creative print co-ordinator.

In 2011 Justin Murray made a decision - to cut his ties with the print company he had founded at the age of 19 and run for 18 years and to set-up Project Print Management (PPM) - in essence a one-man band, though Murray would argue that it’s all about good supply chain management and relationship building. Six years on and he looks relaxed in his home office, despite being the lynchpin in creative print projects that wow the public as well as his clients. You see, trompe I’oeil building wraps is PPM’s specialty, a niche that calls on all Murray’s experience in large-format print, and in business.

“Basically, I set up PPM to co-ordinate really challenging large-format print jobs - those types of job that people think are impossible. Having gone through an enormous learning curve at Pyramid Visuals, and deciding I no longer wanted the headache of running a production company, I felt I had the knowledge to make it not just technically but economically viable”

The move is paying off. As Murray is happy to point out, PPM has low overheads and a great team of suppliers - two large-format print companies and a rigging outfit he uses on a regular basis - a formula that allows him to “cherry pick intriguing jobs that will deliver good margin”.

“Lots of companies handle quite complex large-format print jobs, but not many do the kind of thing we specialise in at PPM,” enthuses Murray, pointing to a number of case studies on the company’s website (see panel for example). That’s because trompe I’oeil building wraps are not easy to deliver. The printing is the easy bit. Getting to the point where PPM delivers its print partners print-ready job files is somewhat more complex. Installation is far from simple either.

To give you some idea of what is involved, PPM works with a client from the very early stages of a job, directing it’s own sub-contracted engineers and designers to get accurate measurements of the building being wrapped and to take the photos that will be used to create the trompe I’oeil images. Obviously these need to be edited for perspective, colour corrected and scaled to create something that will work pretty much seamlessly with neighbouring buildings when the wrap is put up – work handled by Murray and the team.

“The main contractor will have put up scaffolding and we work very closely with them to make sure we have a framework we require for the wrap,” explains Murray, pointing out that his regular firm of riggers is used to create a sub-frame on the building to hold the printed trompe I’oeil graphic in place. “Effectively this is a picture frame that ensures the wind doesn’t blow the wrap into the main scaffolding etc.,” says Murray. “It’s not that simple though because the contractor needs to be able to scan the building to make sure there’s no movement during renovations, so we need to create precisely placed holes in the wrap that allows them to laser measure the building at certain points.

“PPM co-ordinates all the people needed to make the project come together successfully – including those required to make calculations from a health and safety perspective. I make sure I work with people who understand that this has to be a team effort. I work with my contractors and suppliers to work out what is achievable, and what makes financial sense. We know we don’t need to make enormous margin because we don’t make errors!”

Murray says around 60% of PPM’s turnover is ‘decorative’, that is to say it has no commercial value - it isn’t trying to ‘sell’ anybody anything. It is just created to make things look pretty. He admits that the climate has been favourable up to now, with clients willing to pay for wraps that just make buildings look good during renovations etc. But he feels things are getting tighter, “and that developers are going to want to spend less on making a worksite look nice for the public”, a reason for building a new website and up his online marketing efforts.

“People find me through reputation largely, but online too. I currently convert about one in ten enquiries, with the average job  - 70% of which are in and around London - being around £12,000 (though a recent job in Liverpool brought was for £90,000), but the idea of the new website is that I’ll convert more enquiries going forward,” explains Murray, who adds that he’d “rather do one big job than ten little ones” because of the scope it gives him to “properly manage something that is quite difficult and make it profitable”.

As Murray himself points out, “clients will only use PPM if they are confident they are paying for something that I can deliver on time, to budget, and that they can’t get done faster, cheaper and easier elsewhere.

“Coming up with the actual project solution - understanding what is possible - that is really the clever bit, and that’s down to experience and knowing what is technically achievable and in having close conversations with the PSPs and riggers etc to work out what’s feasible overall. It’s about being prepared to work as a team, to think outside the box and come up with something that suits the client’s objectives at the end of the day.

“I’m older and wiser that I was when I was 19, and working three days a week while making money from stimulating projects suits me just fine,” concludes Murray. 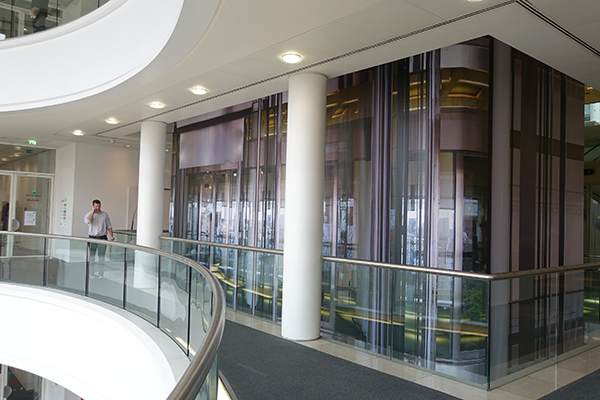 It takes a bit of time to realise that what you’re seeing in this lift shaft is a printed protection screen produced by PPM.

When BNP Paribas realised that it would take ten months to refurbish five glass lifts in two shafts at its London offices the company sought a solution that would keep up appearances - after all, the lifts were located in the atrium - and at the same time protect people should engineers drop any tools etc.

According to PPM’s Justin Murray, “some companies suggested it was not possible, or that an ungainly and costly scaffold structure up the lift shafts was needed. We came up with a solution £60,000 cheaper than the other tendering companies. We could also carry out the work over two weekends compared with six weekends from our competitors.”

So how did PPM do it? “There is a service cradle which runs on a track at the top and around the lifts but inside the glass shafts. Our idea was to fix cables to the cradle track, dropping them down the shaft to form a framework that the printed protection screen could be wrapped around. That itself was digitally printed on a fire retardant solid PVC material and digitally printed on EFI Vutek GS500r, with the hems and eyelets handled on Forsstrom TDW 200-1000 high frequency welder.

Specialist engineers were employed by PPM to carry out the design calculations to prove the installation method would work and be fit for purpose.

Once riggers employed by PPM installed the wire guides vector templates were created for the trompe I’oeil artwork onto. Assisting the BNP Paribas in-house creative team PPM produced this final optical illusion, with rope access engineers hanging at the top of the 31m lift shaft to winch the 25m high x 18m wide wrap into position.