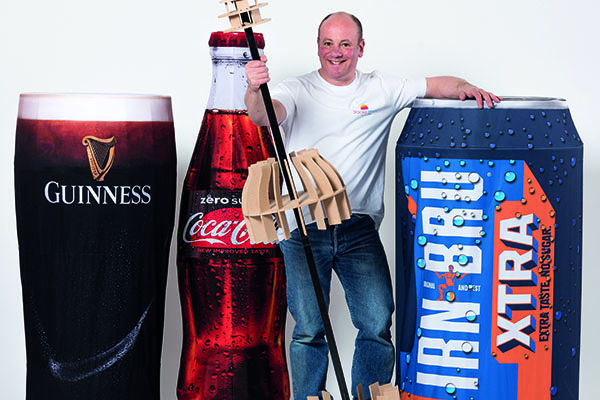 Think 3D in the print sector and you think of 3D manufacturing with specialist machines. But StackaWraps provides an alternative 3D printed product one that can be flatpacked as easy assemble kits, a concept that caught the imagination and got the financial backing of two large-format industry stalwarts…

How big do you reckon the market is for large-scale 3D objects in the retail marketing space? And what about in the exhibition space? Events? The list goes on. Which is why print industry stalwarts Rob Kelly and Ben Moss invested their own money in StackaWraps, a company formed in 2015 by Richard Peter and Natasha Leigh to produce big 3D product replicas for marketing purposes. The thing is, these aren’t 3D manufactured as we’ve come to understand it they are photo realistic looking products made of dye-sublimation printed fire rated washable stretch fabric covering a lightweight frame. They are supplied flat packed as easy assembly kits, and they can be recycled. The graphic on the frame can even be changed because the graphic has a zipper! These reality bending ‘sculptures’ are a fraction of the cost of 3D manufactured objects, are easy to ship and put together, and can be used for myriad purposes. There’s even a ‘vending’ option that allows for shelving to be placed within the 3D replica bottle, or whatever, so that it can be used as a FSDU.

“If you think POS marketing you realise the scope and size of the markets for these products,” enthuses Kelly, who is MD of large-format print company Displayways in Earlsfield, London as well as an investor in StackaWraps, a move he made with Callprint/Jupiter director Ben Moss earlier this year.

So why isn’t everybody doing it? Because the print isn’t the hard bit. Nor is selling the concept according to Kelly the clever bit is the software that allows a 2D image of a product to be turned into the large-scale photo realistic 3D replica. That software, which is patent pending, has been developed by StackaWraps co-founder Richard Peter and is under close guard as you’d expect.

“Anyone can print the fabric and cut the parts to make the 3D structures,” says Kelly. “But getting the graphic to the point where it is usable for a 3D replica is very, very clever. When Ben first saw the 3D models produced by StackaWraps, he rang me and said ‘you’ve got to see this’. And I was stunned. It was a bloody hell, that’s clever moment.”

Kelly and Moss who have known each other since they were both at Photobition back in the 1980s won’t say how much they’ve invested in StackaWraps, though Kelly confirms that Peter and Leigh retain the majority shareholding in the Stockport-based company, which has five internal staff that handle the creative part of the process to produce print and cut files, but which works with production partners for the actual print and frame builds. Interestingly, that includes printers as far afield as China and not as close to home as Displayways or Callprint/Jupiter!

“It makes no sense for Displayways or Jupiter to handle the print production. There are people who have worked with Richard for years and know the ropes,” says Kelly, who nevertheless admits that “that’s not to say things won’t change in time.” And already he and Moss are using their industry knowledge and links to create more StackaWraps sales.

“The synergy is that we can use our graphics experience to help Richard find new routes to market,” says Kelly.

In the UK Jupiter’s sales team has been selling StackaWraps 3D products since the spring. “Because Jupiter are experts in modular displays they are well placed to understand where the StackaWraps products will fit into their offering,” says Kelly, adding that Displayways will also market the product where applicable.

“We can’t do the clever bit, but we can sell it. We work with 3D model makers here at Displayways and if a customer wants to include that in their visual it can really cost. What we see is that StackaWraps products are cheaper, more easily deliverable, etc. At the very least, the product will open doors even if we don’t sell it. There’s no downside for any of us.”

Kelly and Moss are both masters at networking so indeed it will be interesting to see where StackaWraps takes them. But Kelly says that lots of POS companies are interested in selling the concept and that as StackaWraps scales up “we will look at creating more partnerships and getting agents. The products will remain StackaWraps branded though.”

Indeed, there’s a ‘Become A Partner’ button on the homepage of the StackaWraps website, but Peters reigns in the enthusiasm a little when it comes to the domestic market, saying: “The UK is actually a very slow market when it comes to accepting new concepts. The US is much faster reacting and we already have four printers there wanting to work with us. It’s really all just starting up so we’re excited to see where this will take us. The board meets monthly to decide which printers to work with – we have to make sure they have the right print and finishing kit to be able to do a good job. We don’t want to flood the market, or partner with companies that aren’t at the right level to ensure that this remains a high end product.”

So far so good a quick look at the StackaWraps website and you’ll find the slogan ‘custom real-life 3D display stands that go from flat to all that in just 30 seconds’ alongside pretty impressive examples of work already undertaken by the company – a list that is pretty impressive in itself, including the likes of Coca Cola, Guinness, Starbucks.