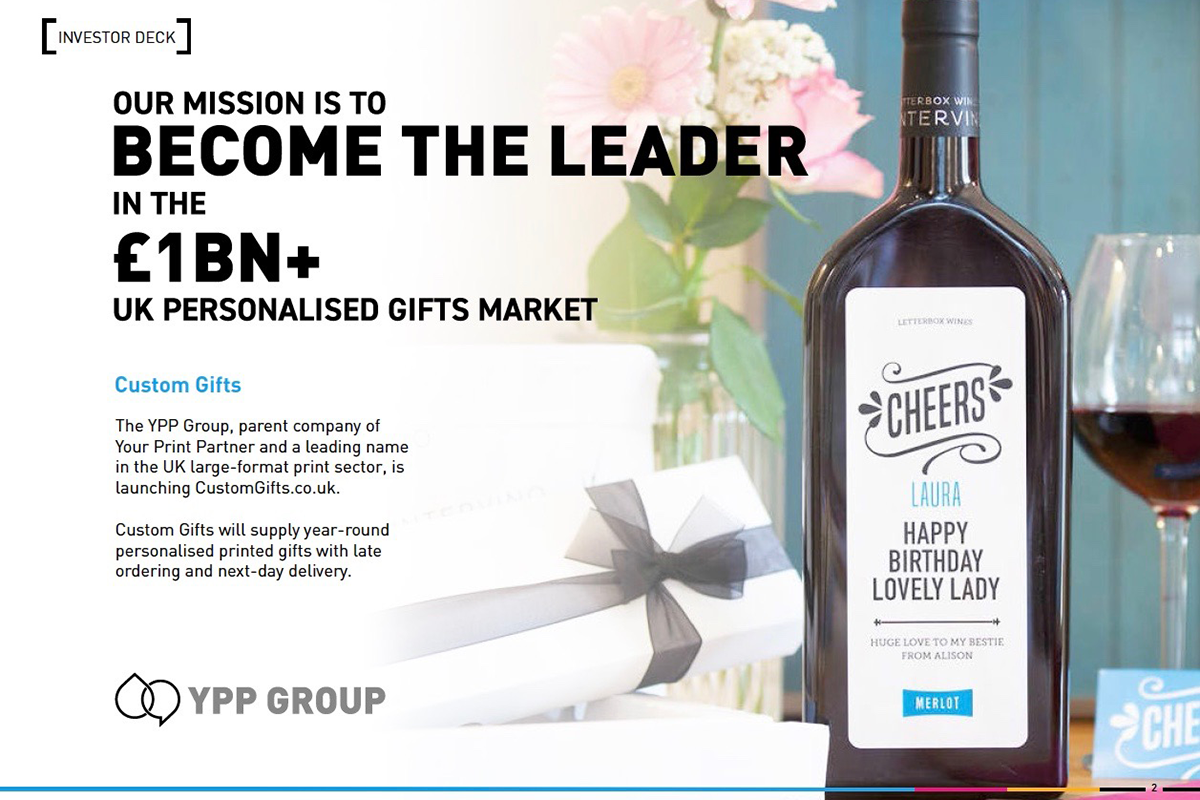 Yes, YourPrintPartner is extending its Web-to-print model to cash in on the huge personalised print products market. Should you be doing likewise?

Not one to let opportunities like this pass him by, YourPrintPartner (YPP) young gun founder and chief, Stuart Maclaren - who’s still not 30! - wants a piece of that action, and has been crowdfunding a new online portal to get him in on the personalised print market sooner rather than later. At the time of writing he had raised around £50,000 of a £500,000 target and was confident of meeting his requirements to get CustomGifts.co.uk up and running this month (October 2018).

You can see why Maclaren - recently given the Lincolnshire Young Businessperson of the Year Award and nominated in this year’s IoD Director of the Year Awards - is keen on extending the company’s Web-to-print (W2P) model.

The move comes on the back of a 200% growth in YPP’s online personalised Santa Sacks business launched in 2015. Its in-house design team created an original range of festive present sack that could be customised with a name or personal message, using the company’s existing digital print kit. More than 12,000 orders were processed that

Christmas and more than 15,000 followers flocked to the company’s Facebook page.

A year later YPP incorporated other personalised products into the Santa Sacks range - the upshot being an approach by television shopping channel QVC to market its personalised products. Given a three-minute slot on air it sold more than 600 units and saw a significant spike in site traffic.

In 2017 the Lincolnshire-based company built on its public profile by taking a 510m2 store in Meadowhall Shopping Centre so shoppers could see its personalised products ‘in the flesh’, and it made sure it had a presence at Christmas shows across the country. It also put effort into building a network of social media influencers, and last Christmas targeted a marketing campaign at UK lifestyle bloggers, receiving a large number of positive reviews and endorsements. The profile building exercises have paid off. Now YPP has an active customer database of over 70,000, with 25,000 Facebook followers, which it expects to bolster its entry into the online personalised gift market.

As Maclaren points out: “We already have the infrastructure to create high-quality personalised products with late ordering and next-day delivery. Now we plan to use our proven marketing approach to tap into the £1bn UK personalised gift market. We will offer 3,000 product lines, including many from licensed brands.”

The Lincolnshire-based soft-signage specialist has partnered with a number of other print providers to fulfill CustomGifts.co.uk orders beyond its own capability, and Maclaren says: “There will be a route for PSPs to get involved with the service and diversify their own offering.”

However you decide to play the personalised print game, perhaps now is the time to make it your own.