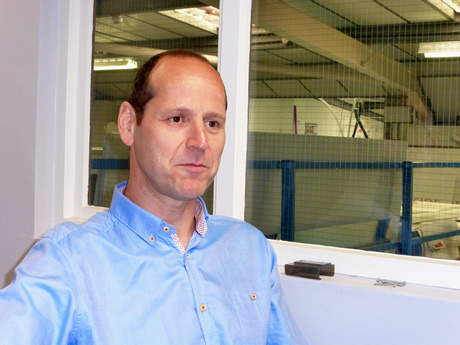 Raccoon, in Kent, has been going since 1992 and has become synonymous with vehicle wrapping. But it is branching out. A few years ago it introduced Promohire - a promotional vehicle hire service. Now it’s launched www.bigprintfast.com for creatives and trade work. So why has such a specialist print company decided to diversify and is it yet paying off? I asked founder and MD Richard Clark.
By Lesley Simpson

Richard, you are Mr Vehicle Wrap. So firstly, what prompted you to take Raccoon from providing printed graphics for vehicles into vehicle hire?

There was a need that was being met within the marketplace. There is a demand for someone with a flexible approach to work alongside brands etc. on promotional campaigns where a vehicle can become the star. A lot of brand owners are keen to get back into experiential marketing because over the last few years a lot of marketing budget has gone online and they now see that is a crowded marketplace and they’re not getting the results they want. There have been announcements from the likes of Proctor and Gamble that they’re pulling away from social media and going back to things like product sampling. And there’s a growing trend towards sampling outside of store, in shopping centre car parks and at events etc. That’s where the branded promotional vehicles come into their own because they grab attention.

We found that existing, and potential, customers were asking us for a price for a vehicle wrap but then having problems actually renting the type of vehicle they wanted. The problem was that the people who own those sorts of vehicles don’t want them wrapped because they know the potential for damage to the paint when the wrap comes off these older ‘classics’. So there was a requirement for someone to supply these unusual vehicles, with the wrap and ready for promotional use, and it went from there.

We’re now sourcing vehicles and making sure they’re road worthy etc., doing the wrap, kitting them out to bespoke specs, handling the logistics. We have staff here that can turn their hands to more than just graphic production, but we outsource the mechanics and conversion work, and we know how to access a pool of drivers etc. So in-house it’s still mostly the wrapping that we’re doing ourselves. But we also do things like stock handling for the promotional campaigns using our vehicles. So last week we had 12 pallets of stock come in for Method, the cleaning products company because they had rented one of our Citroen H vans for three days. We supplied the driver and took in the promotional stock and held it here until required then picked the stock and loaded the vehicle for the different days and different locations it was going to. Then we delivered the unused stock back to them at the end – and they were grateful for that overall project management.

Now you have launched www.bigprintfast.com. What’s that all about?

This is the bit where we’re actually going round full circle. If we go back 15 years or more we were just a large-format print business doing a lot self adhesive work, banner etc. for the trade. That was good for about five years, but then people like screenprinters started to buy their own large-format digital printers and we started to lose trade customers, which is why we moved into vehicle wrapping. We have legacy customers that we’ve always done other large-format work for, but that element got smaller and smaller.

We know within vehicle graphics, what type of work and customers we want. And we know what we don’t want – one off vehicle wraps, bonnet and wing mirror graphics etc. where the customer is going to shop around 50 people to see who’s the cheapest.

But with what we’re doing in terms of investment in print production we know we need to increase the volume of work we handle. And we know there’s a need for making it easy for people - including other printers, sign makers etc. - to order large-format print. We see a lot of small operations, where there may be two or three guys doing a lot of install work, say in the building sector for hoardings and banners… but they don’t have their own print kit, especially UV.

Now bigprintfast was a website we initially set up 15 years ago but we didn’t do much with that site as vehicle graphics grew, but we decided at the start of this year to relaunch it. We have legacy customers and we’re getting new customers – last night a £1000 order came in overnight, paid for upfront online and preflighted within our workflow. We do still need operator intervention, but we’ve invested a lot in software and it’s become an efficient way of doing business for all of us.

How important was it for that side of the operation to have a separate identity from Raccoon?

When we relaunched bigprintfast I think people looked at it and asked ‘who are they?’. When we started fielding calls off the back of some email marketing we’d done and explained it was part of Raccoon, they kind of became more accepting. So with people who know Raccoon, knowing the link helps and they understand why we have a separate online identity – because it’s what happens in all sorts of businesses nowadays – you have different portals for different target markets.

Also, I don’t like going onto a website and it’s trying to be too many things to too many people and you can’t work out what it actually is. We want to keep the Raccoon site focused on the vehicle side of things, so it makes sense to have the separate bigprintfast site. If someone wants big prints, fast, wants prices and to place an order, they’ll find that site quickly and easily and it will deliver them exactly what they want without having to search around.

We are also getting into more retail graphics/3D POS, and we want to emphasize that too. So at some point later in the year we will do a bit or a rebranding exercise over all of the operation and update the website accordingly.

That prompts the question, what came first, print kit investment and the need to fill capacity, or the idea to diversify?

We started looking at what we could use it for, and the real clincher is that we’ll have it running the 3M flexible ink, so we can also print our vehicle graphics on it. But it has a lot of flexibility, especially together with the new Zund, and as we’d already stared to do some 3D POS work, we’ve decided to look to building in that market too. It all fits in to the ‘promotional’ space where we’ve already got strong a customer base.

How is diversification affecting your margins?

Vehicle graphics make us the most money right now – because it’s where we’re established. But there are too many people that just want to keep things simple and keep churning out the same stuff, but the more difficult stuff is where we see the money going.

With the 3D POS for instance, there’s a real gap between the guy who does the graphic design and the guy who does the actual print finishing. We have PackZ and have ArtiosCad coming. The idea is that we’ll have a website with some standard 3D POS products that we can print/cut from Reboard - customers will identify what they want, design their graphic at their end then upload it to the site where it will be merged onto the product of their choice for them to rotate on screen to get the full impact of how the finished product will look. They can make changes to it as they want, so we haven’t had to mess with any files before ordering. We hope to nail that as a W2P offering – we’re some way down the line with it.

With bigprintfast the margins are tight – they have to be to attract the customers – but there it’s about volume. We still need to get the numbers up because it starts paying when we can order in a pallet of this and a pallet of that media.

With the vehicle hire business we’re not a few years down the line and I think at the end of this year we will make a good profit. We’ve now got 15 vehicles that have cost us around £200,000 it total. A lot of those vehicles are bought on the back of an initial campaign, so that initial campaign with that vehicle doesn’t make us money. But subsequent ones do.

What have you learned so far from the diversification process? Have you done the right thing?

I think we’re doing the right thing. There are headaches. Like with bigprintfast – we’ve had orders sent back three times because we were using UPS and they just weren’t up to the delivering large-format print without damaging it. We’ve now changed to TNT who will handle it differently. But you have to pay for those mistakes and it can be a long learning process.

You have to be sure of your core business and understand that any diversification is going to cost and be something you develop over time. With printbigfast I think it will take us two years to get to the point where it’s contributing to the business.

The promotional vehicles part of the business is growing. It’s taken a lot of investment, not just in the vehicles, but in buying software to manage where they are at any given time, when the tax runs out etc. so we can manage them properly. It's a whole different business and we’re still making mistakes every day and learning from them, but if it was easy everybody would be doing it.

What’s next for Raccoon?

Hopefully taking the unit next door to the one we have because we need more room, and probably getting an ‘activation manager’ for the promo vehicles side of the business. But at the end of the day large-format print underpins everything we do, which is why we’re just investing £400,000 in kit.