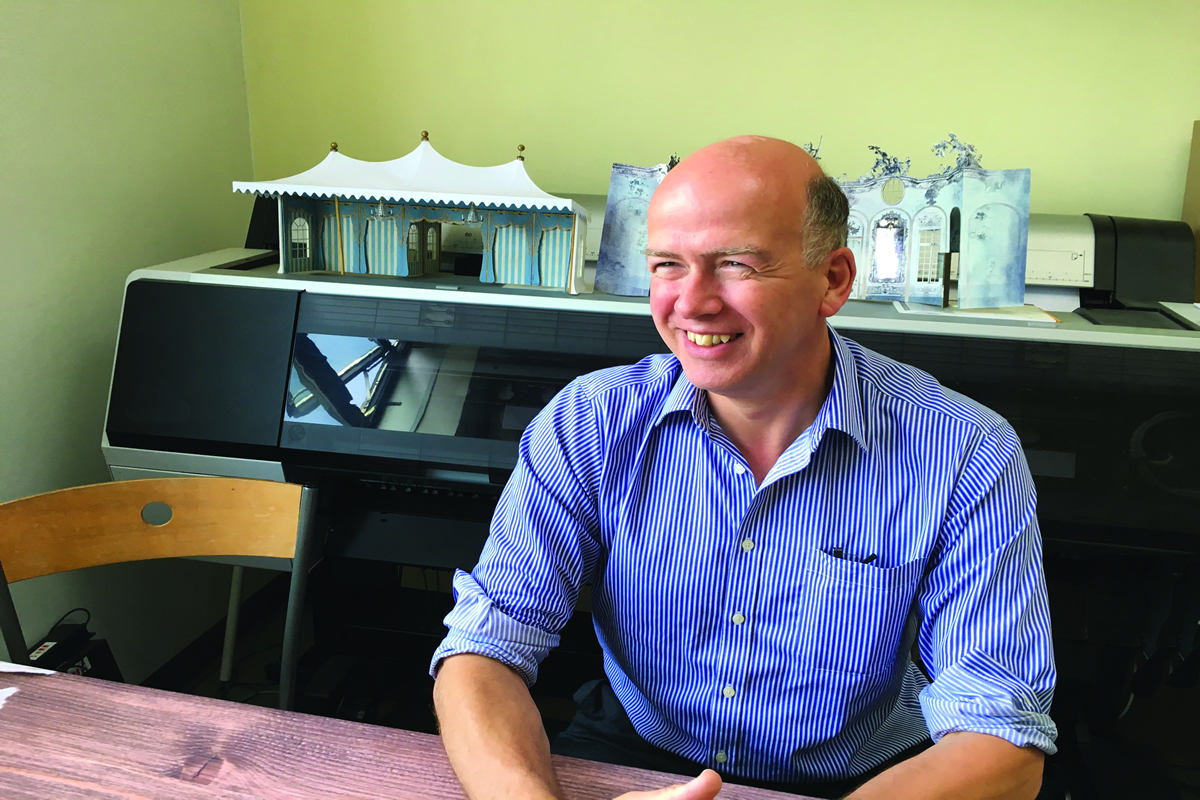 Given its early adopter status when it comes to digital fabric printing, it might come as little surprise to learn that Kent-based theatrical drapery company Prompt Side has become the first to buy an EFI Vutek FabriVu 340 textile printer.

I went to talk to managing director Peter Baker about being in at the cutting edge, the possibilities within the theatrical market for digitally printed textiles, and where trade print fits into his development plans.

Peter, you started Prompt Side in 1989 as a specialist theatrical drapery business, and then in 2004 formed Image Fabrication to meet an emerging demand for bespoke printed textiles. So is the latter effectively a print production arm of the former?

Absolutely. We started Image Fabrication because we believed designers wanted an alternative to hand painting, but we had to make them aware that digital printing of drapery was something that even existed, and of what the possibilities were.

Image Fabrication did start off with a separate customer base and we do keep it separate for accounting purposes, but we’ve given up answering the phones Prompt Side or Image Fabrication. It’s not what we expected – I spent ten years in theatre, and when I created Prompt Side it was a name that I thought would resonate and tell people that they were calling someone who had a background in the business. But when we started talking to people we found they’d say ‘Prompt what?’ and we’d have to explain. Theatre designers understand perfectly well what we’re alluding to, but once you start talking to an accounts department in theatre etc., the reference means nothing. So Image Fabrication was an effort to do what it says on the tin. But we’ve found that this dual naming just doesn’t really work – so we’ve given up and just go by Prompt Side again and continue explaining!

You really were an early adopter of digital textile print technology. How do you now feel about taking those early gambles, and do you think it pays to be a technological ‘explorer’?

When I first got involved - and we’re talking over ten years ago - it was on gut feeling; there wasn’t a spreadsheet or formal business plan in existence, I just knew designers would want 3m wide dye-sub printed material as backdrops.

Our first digital printer was a HP5500 and we bought textiles from a company called 3P. Printing textiles on that was a sort of industry first because people just didn’t do that in Britain. Maybe I was mad, but I was offering a digital solution, that to be brutally honest, wasn’t that great - but people liked having the option. They realised they could give me a design on a Wednesday and have a backdrop hanging in their theatre on the Friday. Also, they realised it gave them more control than hand painting – that if they produced an image it would be faithfully replicated.

But what really caught my interest and spurred me on was going to Fespa at the Rai all that time ago, where I saw dye-sub at 1.6m wide and I thought ‘this is it. If they can get this 3m wide it’s where I want to be’. And I made it known to RA Smart that I was in the queue should one be developed.

Straight after that show I bought my first dye-sub, the 160cm-wide Mimaki JV22. We didn’t have our own calender then so we’d often save up a week’s worth of printing and take a trip across London to someone who did. Sometimes you had to jump in the car and go straightaway of course! So it wasn’t long until we bought our own calender. We weren’t the first in Britain to install a JV22 but I’m pretty sure we were the only company producing dye-sub textile for theatre on a machine of that kind of width.

Having that machine remained a joyful thing, but people kept telling me I needed to go wider because we obviously had seams just 160cm apart on a backdrop. So eight years ago we got the 3.2m-wide JV5, the first in the UK and second in Europe.

So I suppose there have been a number of firsts, and that gives you the advantage of expanding your skill sets ahead of other people, but the flip side is that you have to deal with the reality of sometimes admitting ‘well, that didn’t quite work, so what do we have to do to make it work?’.

I suppose there are times when I’ve been naive and listened to the salespeople, then realised that when it comes to actual worklflow it’s not necessarily as simple as you think it will be! I thought running a 3.2m-wide machine would be like running a 1.6-wide machine. It isn’t. I’ve learned that it’s all about dwell time. But when you’re the first to do something it is sometimes as much of an education to the suppliers as it is to you.

And you are making another first in the form of the incoming EFI FabriVu 340 that debuted at Fespa Digital 2016. So can you just bring us up to date with what large-format digital textile printing equipment you now have?

We still have the JV5 and Klieverik calendar, and we have a 1.6m-wide Mimaki JV300. There are certain materials that you can only get in 140cm wide etc., so it makes no sense to run those on a 3.2m-wide printer. We also have an EFI Vutek GS3250LX Pro that we installed in February 2015. And, as you say, I’ve ordered an EFI FabriVu 340, which we hope will be delivered in early July. I’ve also ordered a new Monti Antonio calendar from iSub Digital – that has a larger drum than our existing machine so it can run quicker to keep up with the pace of the FabiVu.

Those two new pieces of kit are costing about 340,000 Euro, so it’s not an inconsequential investment.

So how key is the theatrical drapery market to the bespoke textile print part of your increasingly higher capacity business, and is there still scope for growth there?

I think most theatre designers now understand about dye-sub and loosely what we can do. What still isn’t really understood is that there’s a vast range of textiles we can use. Those that come here get to see we can print on an organza to a canvas, can provide a backlit print etc., but it’s tricky getting that information out there. Designers want to see and feel samples, and we’re not a very big company - there are only a dozen of us. And it’s particularly tricky because most designers have an agent, and we can send samples to them, but they don’t necessarily get any further than that; a designer might not see their agent for months.

In terms of work, orders normally come through the production manager of a show. Although we’d ultimately love our relationships with designers to be stronger, it’s normally with the production managers that we have most contact. Many of us here have worked in theatre, so we now know lots of people, and importantly, we know the jargon they use. If they say we want a blinder or a leg we know what they mean.

Also, they come to us because it’s very rare that we charge for working on an image file, yet it’s very rare that we don’t have to! But because we understand where a customer is going with an idea, and how it will appear on stage and all that, it’s much easier for us to look at a file and say ‘OK, bearing in mind where they want this to go we need to adjust that’.

What % of turnover is now trade print, and do you expect to do more or less of that in the future?

Our turnover is about £1.2m, and about 15% of that is probably currently trade print. In my mind there’s plenty of opportunity to grow the total turnover and the percentage of that which is trade print once the new machines have bedded in. We’ll have the capacity, quality of output and throughput that will enable us to say yes to somebody who says ‘I need 200 linear metres printed by tomorrow’.

We won’t ramp up marketing trade services straightaway, but we have booked to be at the Visual Marketing Show in Islington next year for instance. It will be the first time we’ve put ourselves forward in that way in that field, so we’ll see… These are areas we don’t know much about, but we’re going to take it on as a challenge and have a good go at it. We know there are plenty of printers that still don’t have dye-sub and for the bit that comes their way they’d rather send it out.

Where do you think the biggest digital textile printing opportunities lie?

That’s a question that really makes me think. Bizarrely, I think that where the growth will be is not for us! I think the real opportunity lies in personalisation - for the high-end consumer marker where there’ll be good money to be made.