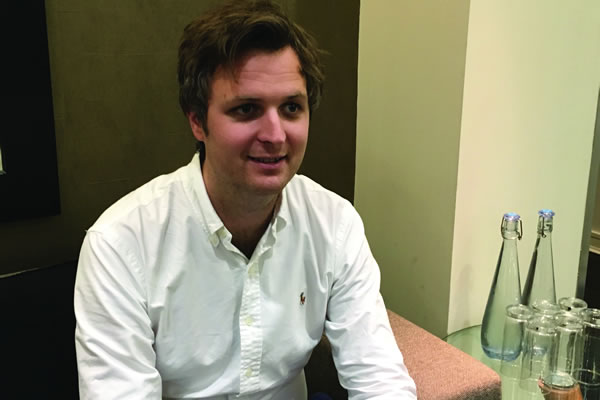 Inurface Media does just what it says on the tin – delivers digital signage solutions that make a real impact. But it’s not all about screens; the central London-based company works closely with a number of print companies to deliver integrated visual solutions for various markets, including retail, events, hospitality…

So just how does founder and CEO Josh Bunce see the relationship between digital screen and print playing out?

Theoretically, there should be scope for integrated digital screen and print projects to exist, but there seems to be very limited evidence of it happening. Is it?

I think it is happening in certain locations for certain types of project. In some of the big flagship store windows you’re starting to see it happening. We are doing it now for a mixture of clients - from The Body Shop to Ralph Lauren. Relatively recently we did a job for the latter, putting high bright screens into a shop (Selfridges) window and then the whole glass surface around that was covered with print/vinyl to present a real eyecatching display.

For The Body Shop we did a project that used a printed graphic across the top half of one of their store’s double height glass fronts, which also had light box frames installed within that, the middle one counting down the days to Christmas. At the front of the store was a touch screen kiosk where customers could interact in a competition, and the prizes being won would show up in the lightboxes integrated into the vinyl print on the storefront.

So the action seems to be very much in the retail space. Do you think we’ll see more integrated digital screen/print in other areas too over time then?

Yeah - digital screens is a growing market and print is a ‘less of’ kind of thing. But there’s a good opportunity to integrate both and get the best of what each can offer. At the moment retail is where we’re seeing the most movement in terms of window displays. And we’re also seeing more action in terms of requests for wrapped screen totems - so where screens in tall freestanding totems are being branded with printed vinyl etc. But yes, I can see it happening more in areas like events, museums etc.

The printers I speak to tend to baulk at the idea of integrating digital screen within the print projects they deliver because they don’t want the hassle of it. What’s your thinking on that?

We actually have some good clients that are print companies - or have traditionally been print companies, but that are wanting to market a bigger solutions package to their own clients - and that can include digital screen technology.

We have our own developers, our own content guys and our own installers, so we can work with printers at whatever level they feel comfortable with.

Also, I’d say it’s important for printers to think seriously about the solutions provider they want to partner. We have worked with printers who have previously worked with other screen providers and have found that they’ve not delivered as they expected - and the end client has then pulled all their print on the basis of the digital screen job having not worked out. Trying to cut corners might make the numbers look fab, but the longer-term result might not be so great.

I don’t mean this to be a sales pitch, but we have our own engineers all around the country and a support desk etc. so a printer doesn’t have to worry about that side of things - unless they want to! Again, we’re happy to work how the printer wants to work it with the client - some print partners want to invoice a client for the original install and have any ongoing support cost go through them too so they can add margin - others don’t want the hassle of that and would rather we dealt with the client direct on ongoing screen support….

So how have the current relationships you have with printers developed – and for this integration to work does one side need to do more running than the other?

Our relationships with printers can work in a number of ways. Some of them see they can add value by adding screens into what is a ‘print’ job and ‘sell’ the ‘solution’ to their clients as mentioned - they produce the print and we provide the screen technology on their behalf behind the scenes as it were because that allows them to add margin to the whole job.

There are others who want to sell the integrated solution, but don’t want to deal with the screen side of it really and are happy for us to be brought in to talk to the client, and to handle all the digital screen side of the package for them.

And we work with printers who want us to work really closely with them - get involved with the install etc. They can add more margin because they’re adding more value themselves.

We don’t margin stack. There’s no point a printer working with a provider who will put together a solution with high margin and then the printer expect to add 30-40% on top of that again. We’ve seen that attempted!

On the whole, at the moment what tends to happen in the main is that a printer who is dealing with a brand sees the possibility of incorporating digital screen technology as part of a visual branding solution and then comes to us to discuss how it can be put together. We’ll charge for what we deliver and they can add a mark up on the whole package but at a level that means it’s competitive all round.

I met you when you were exhibiting at Sign and Digital UK this year. Was there much conversation there about integrated digital screen/print possibilities?

This was out first year at Sign and Digital UK, but we were also at Fespa in 2013 because they had integrated the old Screenmedia show [as European Sign Expo]. That wasn’t a great show but it was good for us because we had a big stand and met some sign and print companies there. We did Sign UK in a small way, just to test the water, but it was interesting, with lots of conversations with printers and signage companies. I think some are still scared of digital signage and what to do about it - is it going to ruin their business, or is it something they need to take on board themselves? I think they definitely need to embrace it, because quite simply, their clients now want digital - as well as print.

Is this a type of integrated project something you are actively investigating yourself then?

Working more closely with printers on integrated screen/print campaigns is an opportunity for us because we’re getting into new clients, and into established companies’ databases etc.

We have a few good print and signage companies that we predominantly work with at the moment. Our aim isn’t to work with them all because we want to find a few printers in certain markets and build up a strong partnership with them. What we don’t want are lots of companies coming to us time and again with the same type of project because we’d end up just quoting lots of different people for similar kinds on jobs - then you lose the value!

It varies, but what we tend to find right now is that printers have an idea of how they think a project could work, but actually tend to like us to talk to the clients with them because it brings another level of know-how to the table. Together we can create unusual project solutions that benefit us all.