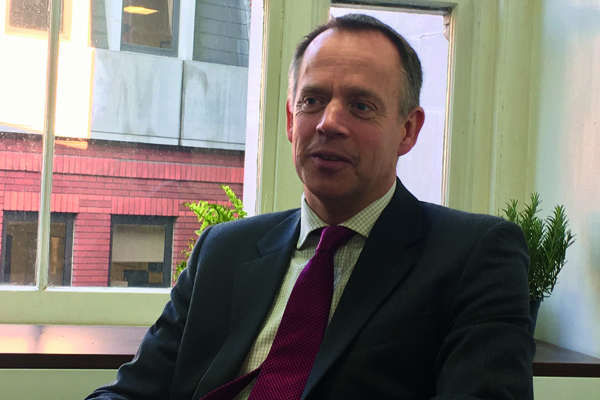 This time five years ago I interviewed your predecessor, the late Kathy Woodward, and asked if the BPIF would become more representative of the growing digital large-format sector. I think few would say that’s happened. What’s your view?

The BPIF website states: We are committed to developing excellence and growth in a sector that is a significant contributor to the British economy. We are uniquely placed to be not only the voice for the printing industry but also an active participant - catalysing and shaping the future of this ever-changing industry with our members.

So how well does the federation represent the needs of the digital large-format sector? I went to its new home at St Bride in London and put that to its chief exec.

We have seen that high-volume generic area of print come under intense pressure, and that’s not going to change in my view. But we are still an industry with something like 8,000 companies, and the BPIF membership is a complete spread of all the type of work they undertake. We don’t segment the membership by process, but I can say that some of the largest large-format printers in the UK are members. Lots of small and medium sized companies that offer large-format print as part of what they do are members too.

At the end of the day, a lot of the things that concern your readers [large-format PSPs] are the same concerns other members have - how do we improve profitability, how do we grow, how do we find skills, how do we deal with issues like colour consistency… all things the BPIF is involved in helping the sector with.

Obviously the BPIF mirrors the requirements of its members. Back in 2012 the feeling was that membership numbers (then about 1000) and scope (largely ‘commercial’ printers) needed to be addressed. What does the membership look like now - and is it still a mission to broaden its appeal?

What we are is a business support organisation and our success is determined by our ability to appeal to the broad range of printing companies. Print is going through a period of change - internationalisation, consolidation - but obviously we are aware that there are strong growth sectors too, such as cartons and labels for instance. We hope to represent all sectors, and large-format sits in what we would define as our target audience. We now have about 1300 members, a number that is gently increasing.

Why then do you think it is that large-format PSPs continue to see the BPIF as ‘an old boys’ network’, and are you doing anything in particular to change that view?

I find it difficult to see how we can be thought of as an old boys’ network when our entire focus is on delivering support services to members. There is a networking element to what we do too - and in fact we’d like to increase that element. And we work collaboratively with the likes of Print Power for example.

We are actually going through a process right now at looking at how we can be relevant in the future in terms of products and services - and how we can broaden engagement. We already have special interest groups, so should we be setting up more of those for instance, especially in the digital and creative space?

To come back to this old boys’ network thing, it is something that frustrates me. Around half of our annual overall income of about £5m comes from membership subs. And they pay that because of the services we provide them - health and safety, HR, legal services etc. Whether you’re into large-format or whatever, the basic support requirements remain the same.

We also have a significant training arm of course. We are the largest provider of apprenticeship training in the print sector - into a whole range of businesses. We could spend a good hour talking about what’s happening with the changes under the Apprenticeship Training Scheme, but the thing to remember is that we are expert trainers - training delivered by industry experts.

However, I think trying to have a ‘one-size-fits-all’ training offering has its problems and perhaps the large-format sector has specific requirements. I’d say that if we are not delivering the right levels of training for businesses I need to know! And maybe, this is where we need to create more scope for dialogue.

Do you think the BPIF is choosing the right people to move it forward, and in which direction?

It’s an interesting observation and I think a correct one. It’s a diverse industry and we need to have that diversity represented on the board.

Council, the BPIF’s governing body, is made up of the chair and deputy chair of six regional boards. They delegate authority to our non-exec board, made up of the exec team - which reports to me - and non-exec directors. I think this structure is a huge asset, because it allows us to in effect use the regional boards as mini focus groups.

In terms of wide-format, we certainly have not taken the view that we’re not interested in that side of print - quite the opposite. In fact, if it isn’t properly represented we need to be thinking about that. The same with our main board.

Looking at the large-format figures in the survey you do [Widthwise] there’s a proportion employing over 100 people and then those with fewer than five, but there’s that huge swathe of companies falling between that - and they are precisely the types of company that the BPIF sees as its sweet spot and to which it can delivery real support.

We are here to support members - but also to further the cause of the printing industry, in all its sectors.

Which brings us on to the BPIF being a member of the GPMA (Graphics, Print and Media Alliance). Can you provide an update on what’s happening there from your perspective?

I think it’s not a leap too far to say that historically trade associations have not worked together as closely as they should have. A few years ago Michael Heseltine did a report on competitiveness and his observation was that anyone can set up a trade association, and have! I think the print industry hasn’t had the voice and level of co-operation it should have had.

When I joined the BPIF it was on the periphery of the GPMA but my view has always been that as graphics arts organisations we should pull together - sitting around the table discussing our common interests, while acknowledging we have our differences. We have far more to benefit from by working together than not.

Training is a key issue - industrial strategy is too - and we need to make sure that whatever comes out of government policy is something that is going to be ‘sensible’ for the whole print sector. My personal view is that government should be focusing on creating business environments where our members can improve productivity by investment in people and in kit. The GMPA means we can all sit down and co-operate on how we present our cause.

That’s interesting, because it has been said that the BPIF, as a lobbying body, has in effect presented ‘print’ as almost a different industry to that which includes growing sectors such as digital large-format.

I think our message to government has changed. We have an annual Members’ Day (in June) and go to the House of Lords where the All Party Parliamentary Print Group hosts a reception, and in 2016 we invited along the GMPA members. I felt really pleased and proud that we were speaking with a common voice as an industry sector rather than as a number of trade associations.

The BPIF has just moved into this office at St Bride. You know I think that strengthens the outside view of print as an ‘outmoded’ industry when we need to be promoting its image as a ‘modern’ business. How do you square that?

I totally agree with those who say print needs to stop harping on about its heritage and present itself as a forward looking industry. I’m in this job because I think this is a great industry with a great future.

The reasons for moving to St Bride were purely practical – we wanted to remain in London but have cheaper premises and this option fitted the bill.

So do you feel the BPIF has any kind of responsibility to redefine people’s perception of print?

Yes I do. The heritage thing is ironic, because most industries would be very proud of their background and we should be too -

but we do also have to get across that print is about providing technological solutions to customers. And that its not just about newspaper, magazines and books, but much more than that. We are talking to government to that end, and we’re going through a consultation process with members on our Priorities in Print document - which we do every three years - and what I’d say to large-format print producers is that if you don’t think your concerns are represented come and talk to us.