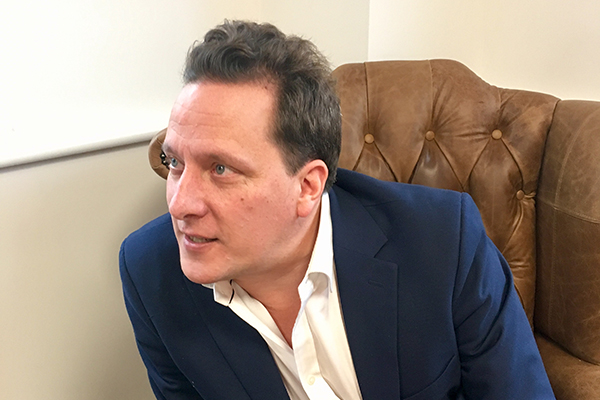 Founded in 1962, Fespa is a global federation of 37 national associations for the screenprinting, digital printing and textile printing communities. Its remit has been to organise exhibitions and conferences for these sectors and reinvest the profits back into print. But is that remit changing? I asked its CEO ahead Fespa 2017.

So, Fespa’s biennial global print event will become an annual event from this year. In your press announcement you state it will “provide the global speciality print community with one comprehensive yearly destination event, covering all technologies, processes and applications to reflect the diversity of their businesses.” Is that code for a broadening of the event beyond the Fespa associations’ focus on screenprinting, digital large-format printing and textile printing?

Realistically, our core will always be those markets. But, it’s also our responsibility as a federation, and that community’s representative, to map out what the future is and where we’re going. For instance, if we’d stayed in screenprinting - our core 50 years ago - and we hadn’t moved forward we wouldn’t be in the place we are now. We need to show what the new opportunities are. It’s what printers are asking us to do.

So what do you mean by a ‘speciality’ show then? Is Fespa just going to become another general print show.

No. We need to go back to our core and look at where we are strong, which is screen, digital, textile and provide them with information that they have at their core of the market, and then where they are moving into. So, they’re moving into interior design etc.

So in terms of exhibitors at Fespa shows, will you seek to encompass the kit and consumables used across all sorts of areas of print diversification?

That’s not something that will happen immediately - we’ve got to map that out quite clearly and we’re just signing a deal with a research organisation to say where are those particular markets we’re going into.

Printers and associations are saying we’re interested in these ‘X’ markets and our job is to research that fully and then come up with a proposition to match. But no, I don’t see Fespa becoming a general print show.

Will this ‘global’ event always take place in Europe? And in May?

Yes, it will always be in Europe. In any industry the strongest global events seem to be based in Europe. And in terms of timing, it will remain around what we’ve done previously.

Fespa says it is a global federation of 37 national associations for the screenprinting, digital printing and textile printing community. Does it still see itself in essence as an exhibition organiser for those associations - or has it in effect taken on the mantle of an international trade association itself?

We always talk about Fespa as an exhibitions organiser, but actually within Fespa we don’t. We are a federation of associations and we need to make sure we push that differential. At the end of the day, we have 37 associations that we look after and we shouldn’t be replacing them because they are our troops on the ground who tell us all these things. So we need to make sure we are seen as a federation, and we talk about the exhibitions because that is the high end side of things, but there are so many other things that we do – conferences etc.

As large-format PSPs continue to diversify the continuing issue is getting ‘creatives’ to understand all that is now possible with the technology. Fespa has run creatives days etc. What’s your take on the level of commitment Fespa should have in helping ‘make more noise’ in the wider creative community?

We have to take a big responsibility - and we need to help our exhibitors and stakeholders push that too. We can be a catalyst but we can’t do it on our own. So things we did in 2012 with the Creative Corner etc., means we’re building more data down the supply chains. So we’re actively seeking to attract buyers of print to the show, because that will allow the sector to showcase what print can do.

But creatives want us to take print possibilities to into their space - the design shows they already attend - not come to ours! How does that sit with Fespa?

I think that is a valid point. But let’s look at it. Take interior design, for which we created the ‘print inspiration bus’ - the intention for which was to take it to design shows - and we did take it to one in Belgium and one in Germany. I think we need to continue to do more of that. I still need to get funding from the board in regard to future plans for that, but we do intend to actively engage with those people in their own environments moving forward.

As a not-for-profit organisation that reinvests the money it makes, what does that ‘pot’ stand at, and where is that money going?

I knew you’d ask that! We’re looking at annual spend of around £735,00 direct. That breaks down three ways: an associations development fund (£335,000); projects committee (£200,000); and dividend association payment (£200,000). Then there’s hundred of thousands of pounds, which changes over the years, in indirect investment.

So for instance, in a number of countries we’ve run a congress, and we’re talking about things like the Print Census. In the last two years we’ve done 12 different Fespa forums in Brazil talking about the future of print.

Can you talk specifically about your relationship with Fespa UK - in terms of the projects you are asked to/will be financially supporting?

Fespa UK is one of our 37 associations. I’d say about 20 of the associations are always pulling projects into the committee and Fespa UK is one of those. They got support funding for the Corrugated Print for Packaging summit last year, and the one before that on textiles. They have applied for other things but I don’t know the details.

The large-format digital print sector in particular could do with some independently gathered stats from suppliers specifically to better understand the overall size and shape of the market. Could Fespa spend some of its reinvestment funds into something along those lines?

For us research has come more to the fore. When I joined six years ago the only research we really had was focused around the actual shows. That has now changed wholesale.

The focus is always going to be on what the printers want, rather than what the suppliers are requesting, so the first real powerful piece of research we’re conducting is the Print Census. That will give you the trends on which inks people are using, applications they are focusing on etc. It’s that kind of information, rather than how many metres of vinyl are sold into the market etc. We could do that but we only have a finite amount of resource. Also, we are very much a global business, so if we were to do something like that in the UK we’d have to do it everywhere to be fair.

Fespa 2017 is just around the corner. Many Fespa exhibitors are looking at getting their wares into markets outside ‘professional commercial’ print customers - how does that impact upon the shape of Fespa’s events because you must be getting your arm twisted?

Well, we are. We have done some research with Smithers Pira looking at various markets, because when we talk to our partners and leading exhibitors on what is meant by ‘industrial’ print they can mean anything from industrial scale to print on novel substrates for various markets. Our view in regard to ‘industrial’ print is to focus on sectors within that - because ‘industrial’ is not a community, and we’re a community based show. If we went to the motoring industry and said you’re into industrial print they’d say no we’re not we are car makers. So we need to create products - not necessarily exhibitions - that are right for those various markets, and where we can add real value. But maybe people from those sectors should still come to Fespa, though the intention is not to start bringing in huge scale production/print lines!

Fespa has grown very quickly. What do you think it will look like in a decade?

If you had asked five years ago if we’d have the European Sign Expo running alongside our show, or had Printeriors etc., I’d have said no. So saying where we’ll be in ten years is impossible. But what I will say is that getting information and data is key will be key to how we move forward. We have hired a data manager to really dig into the numbers so we fully understand the market, and we will use that to help our associations understand how they can deliver more targeted offerings for their members.