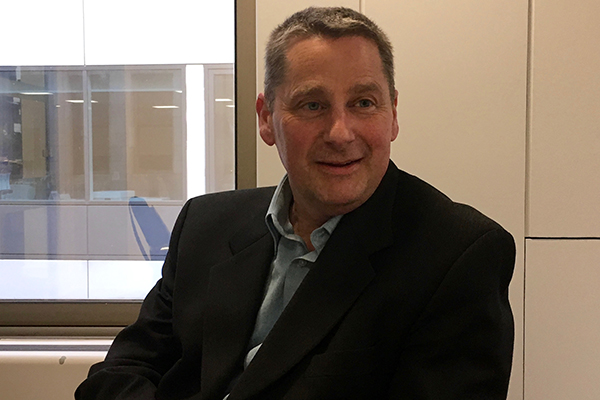 Roland DG is transforming its business as sales of wide-format printers to mature markets - like signage - start to dip, and it recently announced a deal with Custom Gateway to provide an integrated ecommerce solution that will help it exploit the consumerisation of personalised digital print. Simon Wilcox has been briefed to look into the possibilities. So how does he see this playing out?

Simon, your remit is to look into print customisation within the retail space. We started getting excited about the potential for personalised/customised digital print many moons ago, but few large-format PSPs have moved from the B2B model to take advantage of the B2C market. Do you think they have missed the boat as initiatives like the one between Roland DG and Custom Gateway begin to push Web-to-print solutions more actively towards large omni-channel retailers?

Lots of the large-format print providers I’ve worked with create fantastic product but that are very niche – and they’re part of another person’s process. Consumerisation of the process requires taking everything to delivery of the finished product. Many businesses in the supply chain have no interest in doing that.

As we deskill our part of the process because print technology is becoming so much easier to use, we need a manufacturer’s mindset to reduce cost, automate etc., and a way to keep the customer engaged with us. Plus, make better margin, or at least increase volume and improve profitability.

In the industry we’ve talked about ‘productisation’ for some time as you say, but what we’ve actually done is print on things, shown what we can do to each other, and all gone ‘wow, isn’t that clever’. But as an industry overall we’ve become very poor at extracting value from the products that we can print. You can see a very close parallel in farming, where some farmers have realised they can get better value selling their product from their own gate with their own values on it, but they are few and far between because there are hurdles to entry – like putting in place the end-to-end process.

There’s no reason why the products large-format businesses develop could not be sold to a consumer. As a print industry, we allow other people to realise the value from our product. We’ve got to a point in the process where the production is simple and close to commodity. Plus, the value of the product is actually the image in many cases, not the actual physical product.

But in the large-format space many PSPs now consider themselves ‘solution’ providers and offer value-added services beyond print.

But that is in the B2B space largely. There is scope for them in the consumer retail space too, but it is difficult for small businesses to enter it and compete because scale and value become a big part of it.

Selling directly to the consumer is about the creation of physical product people on the street will want to buy. And the digital print industry has been great in creating bespoke product - mostly for other companies. What it’s not been great at is creating bespoke product for consumers. It hasn’t really looked beyond the markets it already has. And that’s my job at Roland – to look beyond the markets we have today. I take all of the work that your readers do today and add another 15-20 processes, then say to those businesses – many of whom already have good relationships with retails via their B2B services, albeit with the marketing people etc. – that consumerisation is now within your grasp.

But consumerisation is not one thing – it has different strands. It takes into account the ability to deliver omni-channel, and the ability to integrate that with logistics and processes. Certain products will be perfect for delivery in-store – small scale, high value. But the requirement goes beyond providing a personalised mug or phone cover. Look at customised wall graphics, door panels etc. – which may be one offs, or may require small batch production. And that’s where getting your head around the end-to-end process and how you fit into it comes into play.

15 years ago Dell offered to customise people’s laptops for them. They could only do that because they had the manufacturing capability and network to deliver. If you take that consumer ‘need’ - and it will become a consumer need, it’s just not yet because they don’t know they can have customised this and that – and look at retail environment, there will be those who decide they want to offer a sales-to-fulfillment option in-store for certain products. But it means dedicating floor space and getting involved in production processes and employing the people to do it etc.

Others will look at their own supply chain and say hang on, we have people who know how to print - because they do our store graphics or whatever -  why don’t we use their expertise? But then they’ll ask, do they have the structure and mindset to be able to deliver product into the retail market?

So consumerisation is about in-store delivery – printing car decals in Halfords, that kind of thing – and also about retailers using print specialists to deliver product to the end customer as part of their supply chain. At the moment there are holes that need to be plugged for that latter process to work. How do you generate artwork? How do you get consumers to become engaged with the mechanism? How do you manage the order process?

The first solutions coming out of Roland’s relationship with Customer Gateway will help fill some of those ‘holes’ but are based on benchtop printers. Do you think retailers would be interested in the solution using large-format print devices - either themselves, or in relationship with PSPs?

The purpose of Roland getting involved in the retail market is of course to sell more hardware. We’ve had some notable success, mainly in mainland Europe, and we feel there are great opportunities in the UK. We started off with the idea that we should be placing hardware in retail environments – with small-format UV printing, impact printing, and to a degree engraving, and smaller-format print-and-cut machines – to show that it is possible to deliver stunning customised product in an area with a relatively small footprint.

The intention was also to help feed larger-format work into a fulflment network, with PSPs who use Roland kit. It’s a simple concept. But there are difficulties. The thing is retailers don’t like too much ambiguity about how things are made. They like to understand the process from beginning to end because they want to own the relationship with the consumer. So in-store theatre is really important to the them – they’re all suffering from lower footfall and want experiential marketing and for consumers to be engaged with them. Yet they see customised print as a risk. They don’t necessarily want to have to ‘invent’ a process themselves. So you have supermarkets with things like a Snappy Snaps concession providing a service etc. The retail space understands how to do this on a photo-gift basis, and they could take that model and move it a bit further on.

But there is much more scope and the intention is to develop much more tailored retail propositions. Custom Gateway is crucial to this. How is works is that they process all of the artwork off-line in the Cloud. The consumer creates a job from a series of templates - because the growth potential really isn’t so much in ‘design it yourself’, but ‘choose it yourself’ - via a kiosk type environment in-store or online. They hit ‘send’ and the artwork is sent to the Cloud and sent back as a print-ready job. The consumer gives their order ticket over and says can I have this please and the in-store printer operator processes the job that’s already in the queue. Though that process has been around for a while it has not been executable across multiple machines in-store. Custom Gateway makes that feasible.

So as the consumerisation of personalised print takes a stronger hold, how do you see the relationship between retailers and large-format PSPs developing?

We’ll see lots of different models whereby a large-format PSP becomes a retail fulfilment partner for a retailer. You’ll have the scenario where there’s an order kiosk in-store and the PSP gets the orders and delivers the finished product back to the store – so it’s essentially a straightforward supplier manufacturer relationship.

I’ve also had conversations with PSPs interested in offering an in-store service themselves – and that model could work well along franchise lines.
And also, groups of people with different technologies – garment printing, embroidery etc - to produce different kinds of product could come together to offer an umbrella customised print offering.

We’ll have an eco-system whereby in-store and external print for consumers is linked together with a software system that pulls it all together.

The development of consumerisation is about relationship building between retailer and PSP as much as anything then?

Absolutely. Retail is enormous and very fast moving. It is enormously price sensitive. And the supply chain mechanisms for dealing with them, once you’ve got beyond the bright idea conversation, are really tortuous. But the potential is enormous.

Roland’s main aim, as you said, is primarily to sell hardware to retailers and create new markets for its own business. But do you see the company - and other suppliers - in having a vested interest in acting a conduit between retailer and PSP too?

Let’s be clear there are not an inconsiderable amount of technologies, money and egos to handle for this to work! So from a PSP’s perspective they probably look at all that’s involved and say ‘it’s too hard’. Essentially, my role for the next few months will be to get enough of the right people from the right parties in a room to talk.

The thing is the retail market wants to see something they know will sell, so I’m in the middle of working on projects with people whereby we’ll be able to show them amazing possibilities – as well as be able to explain how the solution can be delivered to their customers.

So what would you say to PSPs about their role in this move toward the consumerisation of print?

Be prepared to fail short-term to win long-term. Print demand is evolving so base your outlook on what you can do tomorrow rather than on what you’ve done historically or opportunities will pass you by.