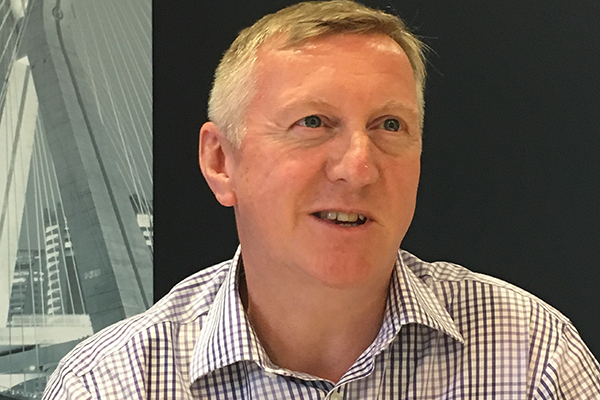 For many a year Ipex was a ‘must-attend’ show for printers. But things change, and the last event at Excel in London in 2014 left many wondering if it had had its day. Organisers put their thinking caps on and came up with a plan to deliver a reinvigorated show back at the NEC in Birmingham this autumn. But is it enough? I asked event director Rob Fisher for his take…

The question on everyone’s lips is ‘can Ipex pull back from the brink?’ Given that in July you have 75 exhibitors will the show even go ahead?
That’s a question we’ve been asked a few times, and the answer is yes, Ipex 2017 is most definitely going ahead. We have great support from the exhibitors that are signed up at this moment in time and we’re building on those we have a healthy pipeline. Frustratingly, decisions have been slightly delayed the political and economic situation is certainly creating uncertainty when it comes to making business decisions.

The last Ipex took place at Excel 2014 and the next was originally due to take place there in spring 2018. The decision was taken to bring it back to the NEC and edge it forward to this year. With hindsight, was that the right move?
Well, hindsight is a wonderful thing. Let me explain that I first went to Ipex as a visitor in 2014 and I started my journey with the show in autumn that year, when we had our first initial discussions with Picon around ‘what if’ scenarios so, ‘what should Ipex look like going forward?’. ‘Should we retain the brand?’ was another question instantly asked, and after research everyone was agreed that we should.

But, in 2014, Drupa had already come out with an announcement that it was going to switch to a three year show cycle, so our planning was very much based around the knowledge that we didn’t want to clash with Drupa. We wanted a healthy gap between the shows and 18 months after Drupa took us to October 2017, which we thought was an ideal timeline for the next Ipex.

We then had a discussion about ‘where is the best venue for this show?’. Having taken the decision just after the 2010 show to move to London, it turned out to be a Marmite location and polarised people. We asked Picon to poll their members on their venue of choice, and they came back with a resounding request for the NEC. It’s much easier access for visitors from the UK and international so the decision to move back there was taken early 2015.

At that point we started talking to Picon about forming a group to help steer the show and towards the summer of that year we introduced the Ipex JEC (joint executive committee) and met formally for the first time that September.
We knew from feedback that the days of 5,000m2 stands were probably over a reality of the global landscape, budgets of that scale just simply aren’t there anymore. So we were aware that we had to make Ipex the right show for the industry at the time, and we always thought we’d need one or two cycles of the show before getting Ipex back to where we want it to be, but there was a real desire for exhibitors to show live equipment, and, more importantly, a desire among visitors to go and see live technology demonstrations.

To help exhibitors control costs you introduced an ‘all-inclusive’ (maximum stand size limited to 500m2, with the price of exhibiting including equipment lifting, machinery mains connection and power consumption). It doesn’t look like that’s been as attractive as you had hoped it would be. Is that a fair assessment?
I think it’s quite innovative that we have the venue sitting alongside Ipex and Picon on this. When we talked to exhibitors one of the messages we received loud and clear was the high cost of power at Ipex, so we had numerous conversations about how we could alleviate that something that has kept me awake at night for months waiting to see what technology is likely to be at the show and how that will impact overall power consumption. But without having done something like the all-inclusive package I doubt we’d have got the buy in we have from the likes of Ryobi, bringing big presses to the show.

How confident are you of running an Ipex that can show the whole of ‘print in action’ as outlined by you last year. In the past Ipex organisers have paid little attention to the wide-format digital inkjet space. From the exhibitor list it looks like little has changed this year. What’s your take on that?
I think this is a problem that the show hasn’t addressed for a number of cycles. We’re trying to change things going forward. And we’ll try and engage with the large-format sector this time around largely through the show features so, we’ve got a collaboration with the London College of Fashion for instance.

But you’re not managing to get the large-format kit suppliers on board as exhibitors to draw in the relevant visitors are you?
We haven’t at the moment. That doesn't mean we’re just giving up! We are continuing to knock on people’s doors. We’ve tried to engage with them at various different levels and will continue to do that. I think they appreciate that we are listening to the market and want to provide as show that is as fully representative as is possible, not only to attract the widest range of printer visitors as possible but to attract brands etc. too.

Why large-format print manufacturers have not got on board so far is a really complex issue, and without divulging specific conversations it’s difficult to pinpoint because I think it’s a mixture of things that have happened during the show cycle this time around some of which are completely out of our control, like Brexit. With larger companies especially, I think there’s an issue of where does funding come from in terms of exhibiting at shows like this is it UK budget or European budget etc.

Have you had much response from printers to your London College of Fashion initiative and are any of them large-format print producers?
This is really the first time that college has encouraged their student to use print, so it’s a completely new technology to most of them. The team there have been working with printers, and some printer manufacturers as well people like Digitex, CMYUK, PressOn to help the students realise the visions they have in their heads. Then we’ll have models wearing the creations at three ‘print in performance’ choreographed sessions per day, the idea being that we want to capture the attention of both printers and creatives.

Do you think you’ll get many creatives along to Ipex 2017 then?
I think if we just invite them to a print show they won’t come, so we’ve got to find innovative ways of drawing them in. The London College of Fashion is one route. We also need to talk to our exhibitors and create a tour of the show with relevant content for creatives and brand owners.

Have you had much response from large-format PSPs in relation to the Future Skills Zone where Ipex is hoping to show young people the range and breadth of opportunities available to them?
As you say, we want to attract young people to the show and this is one way of doing that. The relevance to the large-format space here is that we’re coming at it from a business discipline angle, rather than specific applications, to show youngsters what the industry can offer them. We’re working with PrintIt and have engaged with The Print Charity, BPIF and of course a lot of these organisations have apprenticeship schemes. The actual line-up is for the zone is yet to be finalised, but it will include speakers from Brief Cases, Novalia, Family Business Place, Adobe and Learn2Print.

We will be marketing to schools in the local area and those with dedicated print streams within their offering.

What about getting to those that aren’t already considering print though. We need IT specialists, good managers etc.
I hope our content will be engaging enough to attract some of those people. We only have so much budget in terms of marketing to people, so we hope our partners will help us reach young people too.

When will we have details of the Ipex conference programme? Is any of it likely to included speakers from, or be targeted at, large-format PSPs?
Yes. Bernie Raeside will talk about the crossover between display and textile materials for fashion and interior applications. We have a speaker from Killer Creative, an agency in the charity PR/marcoms arena, who will be talking about the role of print in multichannel communications. IMI Europe will also have a speaker talking about print as part of the industrial process.

We’re also talking to a number of large-format print companies about taking part in a print and retail stream.

Will we see another Ipex? If so, when will it be and how will it look?
Ah yes, well, we will talk very extensively with our exhibitors to find out what the right frequency is for an event like this. We know we don’t want Ipex to become an annual show. Drupa moving back to a four-year cycle creates an interesting dilemma for us because we don’t want to clash with that show. And we need to know what exhibitors and visitors want. We’re doing research now and by the time Ipex 2017 takes place we want to have a firm plan regarding the next Ipex.