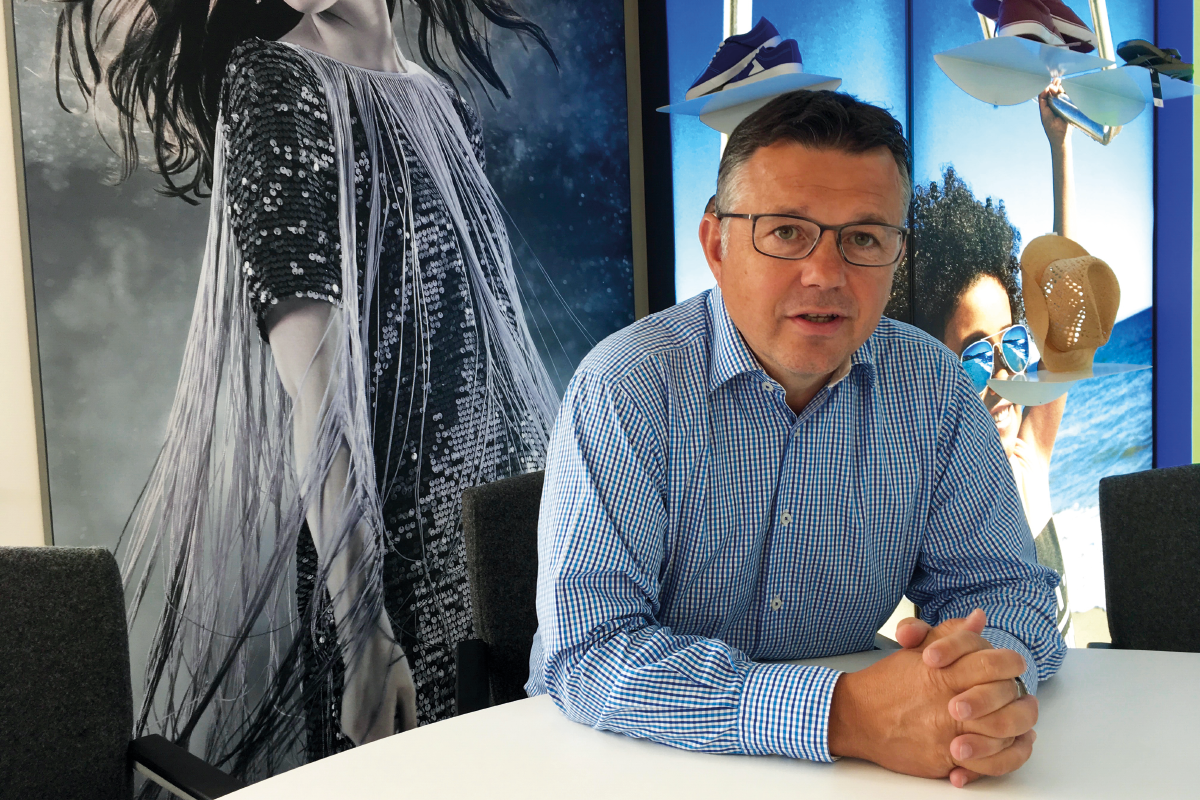 Earlier this year Huddersfield-based Leach was acquired by French-owned Chargeurs, a materials manufacturing and services group based in 34 countries across five continents and operating in four segments - temporary surface protection, garment interlinings, technical substrates and combed wool. So how’s that going to impact Leach as the Brexit deadline looms? I asked Richard Leach who, as head of what was a family firm, was responsible for finding the new owner.

At the time of Leach’s takeover in April 2018 you said you were proud of its 127 year heritage but that its structure as family-run business didn’t support its growth plans, so you started looking for the ‘right’ buyer. What made Chargeurs that - assuming it was about more than the money it paid for the business?

I believed the company was at a stage in its development where it had a services portfolio and customer-base that was ripe for international expansion - and indeed needed to do that to reduce its dependency on the UK retail market. But I judged that the Leach family ownership was not the right structure with which to make a success of the company’s international expansion opportunities. There was precious little experience of international sales and marketing, the foreign language skills within the business were negligible - and also, when we looked at developing sales offices in other countries ourselves we thought the risk, cost and speed with which we could do that did not make sense for a business of our resource.

I very strongly felt we needed to expand internationally right now - not somewhere down the line. As a family business that wasn’t going to happen - there were too many gaps in our knowledge, understanding and financial firepower.

The company has, almost by accident, developed more overseas sales over the years, and we believe that is not because we are good at international sales and marketing, but because we have a really good product range and really high quality levels and consistency - the things that attract the brands.

My philosophy has always been that continuous growth is essential for the long-term wellbeing of the company. That’s because market prices in large-format graphic display have eroded each year, so the only way to keep moving forward is to increase the volume of work, and we’ve done that for the last ten consecutive years. To keep profit going forward you have to keep sales going forward while becoming more efficient. You need to invest to keep abreast of technological development and you need to make sure that the kit is well loaded so that it doesn’t just recover its cost but contributes to the profit of the company. So it’s a treadmill - one we’ve navigated quite successfully. However, we came to the conclusion that with the UK retail market relatively flat, and with us having almost accidentally grown international sales - about 15% of turnover is now overseas work - that we should look to increase our geographical spread.

So you specifically looked for a foreign buyer?

Most definitely. We specifically did not want to sell to a UK entity. We wanted to make sure that Leach was the key strategic operation within the UK for the new buyer. We wanted to minimise the risk of this operation - which has been strong for so may years - being merged and potentially being weakened by a company with multiple UK sites.

Leach is Chargeurs’ only presence in the UK, yet they are active within this display market, especially on the fabric side of things, across many other countries.

Also, we have always targeted the upper middle market brands and we have an aspiration to move up to the luxury brands - because they can and will pay a better price, and value the type of product and service we can provide.

Those brands are increasingly looking for international suppliers, and a huge number of them have roots in France! Chargeurs made a strong case to us about the exposure they had to some of these luxury brands, and there’s already some very early stage discussion going on with some extremely well-known French names. The hope is that those discussions will lead to quite transformative business. There’s no way a relatively small family-owned Yorkshire business could have even got access to these companies.

Do these brands not seek print providers who can print locally for them across the globe?

I don’t think there’s a hard and fast rule to that. And I think there is a feeling within these brands that a European site is local - so a UK operation would be deemed local for the whole European market. What is important to them is consistency across continental boarders.

That has to lead us on to Brexit. It must have been a consideration when you signed the deal with Chargeurs, and I assume it still is. What are your concerns/thoughts on how the changing political and economic landscape is going to impact Leach now it has a foreign-based parent?

My view is that before the Brexit vote the UK was one of the top performing global economies and that since the vote it has slipped down to become one of the poorest performing global economies. There is still growth, but that growth is quite anaemic, and it’s clear that the UK retail scene is not performing massively well, particularly at the mid-market level. So, wanting to internationalise and move up to the luxury good end of the market seems to be a sensible strategy to be pursuing - but one that was so much harder to pursue as a Yorkshire-based independent than as part of a large, internationally connected, financially powerful group.

Our thoughts on wanting to become more of an international player became much more focused post the Brexit vote, and it was probably about a year after that was taken that we decided we needed to look for a buyer that could support the kind of growth strategy we envisaged.

That all sounds positive, but have there been/do you foresee any negatives with Leach having a French owner?

Well, number one, our customers have received the acquisition very positively. For a start, Chargeurs has not bought a broken company that requires short term fixes. The short-term plan is business as usual.

The acquisition is about the long-term. It’s about driving Leach’s growth rate by making more investment capital available and by leveraging Chargeurs’ international sales and marketing expertise.

Our UK customer-base has been reassured by that, and true to its word, Chargeurs is not rushing in but taking time to fully understand the business and how their R&D expertise too - mainly over in France - can help take Leach forward.

Another thing to be said, is that Chargeurs is respectful of the need for senior management teams to have nationals on board, so it is not swamping the Leach with massively heavy levels of head-office personnel.

So can you take us through the structure at Leach now?

Obviously there’s a lot to be done in terms of integration with the new parent in terms of things like financial reporting, global health and safely policy alignment etc. But when it comes to driving the business, Chargeurs quickly assessed the management team below myself and Jim Parkin to be very capable.

Jim and I are contracted to continue for at least a year, but the idea is that we do eventually fade away from the business [Leach Impact and Leach Inspire - now owned by Chargeurs. Richard Leach continues to own/run Leach Studio as a separate entity]. The new management structure now in place - with James Lavin as MD and Adrian Ray as sales and marketing director - will come to the fore and run the UK operation with support from head office. There are two Chargeurs people on the board - Sampiero Lanfranchi, director of international development, and Patrick Bonnefond, chief executive of technical substrates.

The Chargeurs group has publically said it plans to double its turnover to 1bn Euro in the next five years. How strategically important do you think the Leach acquisition is to growth-hungry Chargeurs - and do you think we’ll see it make more print company acquisitions?

I can’t comment on that. What I can say, is that when it comes to Leach it has shown that it puts a real onus on upskilling people and on putting decent budget behind things like training and development.

Your great-grandfather started the Leach in 1891 and it’s now an £11m turnover business. You’ve already said that the financial backing of Chargeurs means you can move from 16-hour per day operation to 24-hours, and that you’ll look to increase the £250,000 per year spent on new product development as it becomes an ‘experience maker’. Finally, can you tell us more on those fronts?

In the two months following the takeover Chargeurs authorised the largest piece of equipment the company has ever bought - a Durst dye-sublimation system - that will be commissioned in August. Other investment is on the cards as part of factory expansion this year, and we’ll see head count rise.

But the strategic logic of this deal is made up not just of financial muscle and the international sales and marketing expertise we’ve discussed - it’s also about R&D integration across Leach and Chargeurs for new product development so the offering is always cutting edge. I think the market will see some interesting developments as a product of this acquisition.