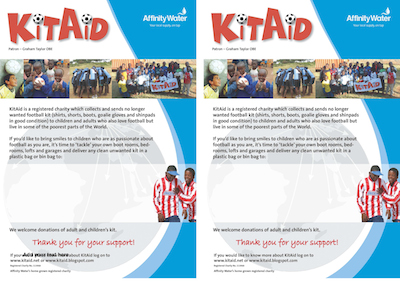 How Stylographics is turning its own waste into donation drop-boxes for KitAid.

Stylographics has always had a bit of a thing about environmentally friendly products and pushing them into the marketplace. In keeping with that mentality it introduced 100% recycled, recyclable and sustainable Re-board into its portfolio a while back, and now it’s taking its caring ethos a step further - Re-board cut-offs are used for a charitable project called KitAid.

KitAid is a charity that was set up by Derrick Williams MBE after a visit to Tanzania on a WaterAid supporters’ trip in 1998. Inspired by the amazing reception he received from the children and adults in remote villages, all because he we wearing his favourite football shirt, Williams made it his mission to provide football kits and equipment to people of all ages right across the world. Since KitAid began, 15 years ago, the constant delivery of donated kits has reached many adults and children, and to date approximately 200,000 kits have been sent out to 40 different countries.

Enter Stylo’s football fanatic production director, Simon Wheeler, who decided there was a relatively simple way the company could help the charity, and cut its own waste into the bargain.

“Being a Watford FC fan I have been aware of KitAid for quite a few years, and I have myself donated old Hornets shirts, kid’s football kits and boots to this excellent charity. It is a great way of helping like-minded individuals across poorer parts of the world to simply feel and look the part when they are playing the sport they love. It is with a wry smile when you see a news report from a war torn or poverty stricken nation, that in the background where crowds are gathering, you will catch a glimpse of some obscure League 2 team’s away shirt as well as the odd sighting of Watford FC’s golden yellow shirts.”

Wheeler adds: “The idea to help this charity was born when I did a collection at Stylo and I was handed kit from the generous donators in plastic bags, which ended up in an untidy mess by my desk.” And thus was born the idea of producing KitAid drop-boxes for donation collections.

“We quite often have off cuts, spoils and damaged sheets from a well-used material called Re-board. We use the material to create dramatic 3D displays because, as well as it being very rigid, it can be cut to create all kinds of shapes and sizes. It is extremely strong and can be re-used over and over again, and you can print directly onto its organic surface.

“With the waste material we created a simple drop-box that can be sent flat pack to other companies that have agreed to collect shirts and kit for KitAid. You simply screw it together and the graphics printed on the side explain what happens to people’s donations.”

Wheeler says: “The response from KitAid has been very encouraging and they are always pleased when I send an email to say we have more.” He adds: “There is the added benefit that once the box is no longer needed it can be recycled within a company’s normal card and paper scheme.”

“Thanks to Simon Wheeler who offered to help KitAid and who made these drop-boxes happen,” says Sean McGuigan, one of the KitAid trustees. “The Re-board drop- boxes are a real benefit to our small charity. They not only help us collect kit, but advertise the charity and explain what we do. They are easy to assemble and eye-catching, particularly in office reception areas and in clubs where they are in very great demand. All our regional co-ordinators want them!”