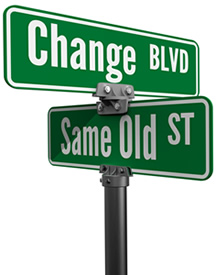 So what’s Lego and Levi Strauss got to do with me? Quite a lot as it happens when it comes to environmental messaging and direction.

“I, as a designer, made the problem. I made the mess. If we can think of ways of designing without making the messes, we will be ahead.” This observation by Paul Dillinger, head of global product innovation at Levi Strauss, was one of the high points at the Sustainable Brands conference in San Diego this summer.

With more than 2,500 participants, Sustainable Brands was not the kind of event Dillinger normally speaks at. His nerves as he took to the stage were visible – and yet inspiring, conveying the fact that, although he didn’t really want to be there, he felt obliged to be because he had something important to say.

More businesses focusing on sustainability could do with a modicum of Dillinger’s honesty, passion and optimism. With each new climate change study suggesting we are inching closer to Armageddon, it is easy for companies, consumers and citizens to assume that nothing they can do will make any difference. To give just one example, no matter how good a shopper feels about using a recyclable bag, their belief that they are helping to save the world may waver when they read that the new HQ for the US government’s National Security Agency in Utah requires three million tons of water a day to keep it cool.

There are signs that things are changing – but many of them don’t get much play in the media. For example, only last month, after an extensive multimedia campaign by Greenpeace, everyone’s favourite toy brick maker, Lego, ended its 50-year relationship with Shell due to concern about the oil giant’s plans to drill in the Arctic. This isn’t just about Lego, as a nice Scandinavian company, polishing its environmental credentials. Similar concerns have prompted the Rockefeller Foundation, financed by a family that made its fortune from oil, to announce plans to sell its investments in fossil fuels.

There are other kinds of signals that, in some countries and companies, things are moving in the right direction. Battery-powered bikes now outsell cars in China, Ethiopian company Sole Rebels is the world’s first Fairtrade sports shoe company and Levi Strauss has eliminated around 96% of the water it used to finish its famous 501 jeans.

So, two of the assumptions that have stymied efforts to fight climate change are wrong. The issue is urgent but Armageddon is not inevitable. And the global economic crunch, which we’re all still suffering from, has not knocked the issue off the corporate agenda. True, consumers have not yet shown a definitive preference to pay more for products that are kinder to the planet. Yet by wrecking the consumer’s trust in business, the crisis has made sustainability even more urgent. The concept of the triple bottom line – social, environmental and economic – seems more relevant than ever after the finance sector effectively triggered a crisis that did as much damage to the global economy as a world war.

The main barriers to action, in Aronson’s view, are: “Sustainability is being seen as not as rigorous or financially valuable as other areas of the business and seen as tangential, or as outside of the core of the business that creates value.”

Part of the problem here is that many executives’ expectations are, Aronson’s research suggests, far too low. The old Peter Drucker adage that you can’t manage what you can’t measure applies here. Until companies start measuring their programmes, they have no real grasp of the difference actions on sustainability are making. While many companies often fret about return on investment, Aronson estimates that the ROI on sustainable supply chain projects can exceed 100%.

Aronson also argues that the idea that sustainability is tangential ignores the way such measures can improve product differentiation, innovation, brand perception and cost efficiency. Such areas are hardly tangential to the core business. Placing sustainability at the heart of a business is good for the company - and the world we live in. Turning rhetoric into reality can take time but the process starts, in the words of Dillinger at Levi, with the determination to run a business in a way that makes fewer - or no messes.