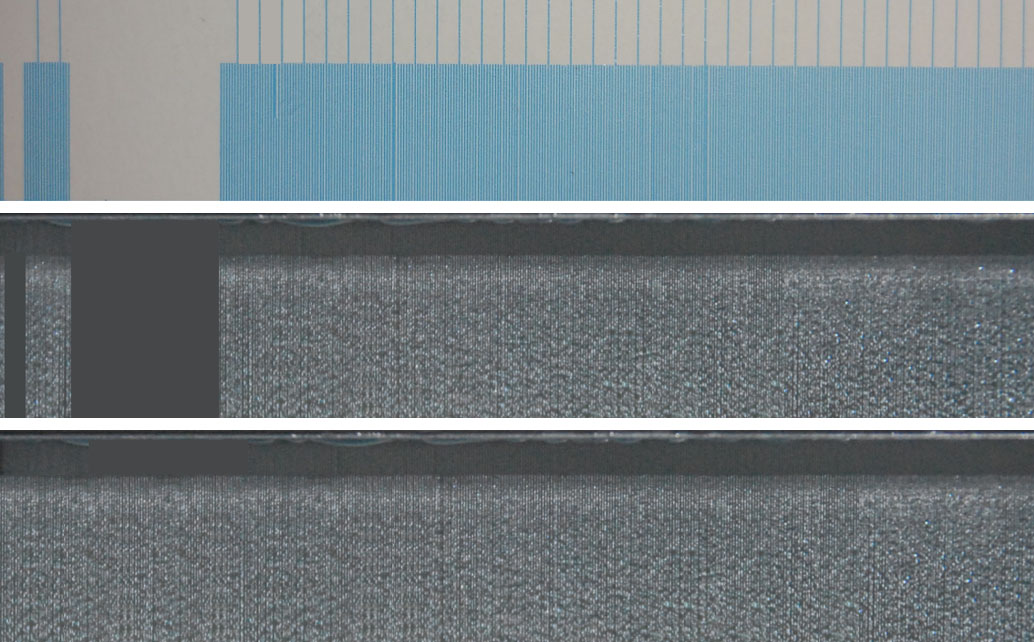 “The cost of recovering the printhead is around 20-30% of the cost of a replacement head/head assembly, including return shipping.

It’s taking off. Camscience is getting ready to launch a pilot printhead recovery service this August. here’s how it will work.

In the May issue of Image Reports we carried an article (‘Turning Heads’) that looked at work being undertaken by Philip Keenan at Camscience - supported by Cestrian Imaging and Nazdar - to determine the feasibility of a UK-based printhead recovery service. In August a pilot scheme will be launched.

Keenan says early indicators are that around 90% of printheads suffering from clogged/deflected nozzles can be recovered to perform like a new printhead. The printhead recovery programme he’s developed involves a processing sequence to gradually deconstruct the cured ink pigment and binder aggregates residing in printhead nozzles and actuator channels. The process causes a reversal of the mechanisms causing the original blockages of cured-ink and restores its performance.

At the moment, printheads with nozzle plate damage or electronics failure are not repairable, but Keenan believes this should be achievable in the future, saying: “thankfully these make up less than 5% of the heads we have evaluated to date”.

So who will benefit from the new service? “We are talking to PSPs, especially those that use printers with large numbers of heads. A multi-head printing module can cost over £6,000 and we anticipate that we can refurbish modules for a fraction of that,” says Keenan.

“We are also in discussions with a number of printer maintenance service providers (MSPs) who support a wide range of presses. Using our printhead recovery services they will be able to offer their customers a cost effective head replacement service at a fraction of the cost of replacing heads with new.

“Also, if a customer wishes to switch to an OEM ink, they can now do so, with MSPs able to provide third party printhead warranty support from Camscience as well as ink supplies. In this manner PSPs and printer maintainers will be able to up their game and operate at a higher quality, cost and performance level.”

Camscience is talking to two large-format printer manufacturers on how to help them replace in-warranty printhead failures, cost effectively. “We are also interested in supporting their printers where the associated printhead has become end-of-life and their discontinued supply will result in printing presses having to be scrapped. We want to keep such printheads in circulation in perpetuity - as far as humanly possible! - to allow high-value presses to continue in service for years to come, and to prevent them becoming scrap,” adds Keenan. “Of course we would also like to speak with the printhead manufacturers themselves.”

The printhead recovery process will work like this: Camscience will ask ‘customers’ to use a smartphone app - called Camscanner - to capture an image of a test print (showing print defects) aligned with the printhead that produced it. This image is sent to Camscience, and a hardcopy attached to the printhead which is then duly shipped to Camscience. On receipt, the company will visually inspect the printhead for nozzle plate damage before testing the head for nozzle jetting performance, comparing this to the print sample. If nozzle blockage is confirmed printhead recovery will begin. On completion Camscience will complete a final jetting test to confirm performance before packaging the head and returning it to the client.

Keenan expects that for printheads that are using either the original manufacturers ink or an approved equivalent (such as inks from Nazdar), the cost of recovering the printhead is around 20-30% of the cost of a replacement head/head assembly, including return shipping.

(Heads with unknown usage history can be evaluated by us for feasibility of repair for a small fee).

“It is our intent that our repair centre will be value driven, providing guaranteed services that delight our customers and help them reduce costs, eliminate wastage and achieve their business goals,” enthuses Keenan.

The Camscience website will go live on 31 July and detail printhead recovery services and procedures, and the pilot repair centre will be up and running at the end of August.