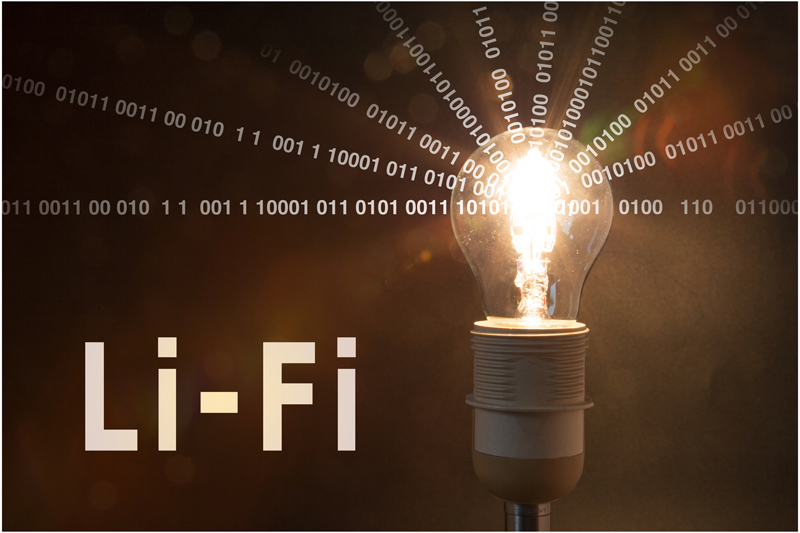 If you’ve not heard about this light-based communication technology, you will. Walter Hale helps you get to grips with what it could mean for your business, and for the environment.

Every new technology seems to come with a superhero-style billing. Li-Fi is no exception. A representative headline would be: “100 times faster than Wi-Fi - and it could save the environment too!”

Sounds too good to be true, but it may well not be. Last year, New Delhi start-up Velmenni used Li-Fi to transfer data at roughly 1 gigabyte a second which is, authoritative sources suggest, roughly 100 times the speed you’ll get on a Wi-Fi network. Not bad, eh?

But what is Li-Fi exactly? The term was coined by Harald Haas, a professor at the University of Edinburgh, at a TED talk in 2011. In that famous speech, he envisioned light bulbs that could act as wireless routers. That’s why the ‘Li’ is short for light. In essence, it is a groundbreaking light-based communication technology which uses light waves, instead of radio wave technology, to deliver data. The beauty of Li-Fi is that it could enable faster, more reliable internet connections, even when the demand for data usage outstrips the available supply from existing technologies, such as 4G, LTE and Wi-Fi.

And Haas is pretty clear why we need Li-Fi or some equivalent solution. As he writes: “We know from a CISCO Whitepaper that the compound annual growth rate (CAGR) of mobile data usage per month is around 80%. At the same time, the network spectrum efficiency of state-of-the-art cellular systems exhibits a saturating trend. This requires radical new ‘out-of-the-box’ solutions in mobile and wireless communications, and one key to solving these issues is the use of the free, vast and unlicensed infrared, visible light and ultraviolet light spectra in addition to the existing radio frequency (RF) spectrum between 0 and 300 GHz”. In his view, Li-Fi is the answer although others have made a case for WiGig, the new brand of Wi-Fi.

Li-Fi is unlikely to replace all - or indeed any - of these technologies, but it will work seamlessly alongside them. Indeed, work on a new standard - Wi-Fi HaLow - has begun to facilitate this. One of its advantages is that it will support connectivity in environments that do not easily support Wi-Fi, for example, aircraft cabins and hospitals. As with every technology, there are challenges. Li-Fi signals cannot pass through walls so, to enjoy full connectivity, LED bulbs will need to be placed throughout the premises. Some experts have suggested it will also need lights to be on all the time, though Haas disputes this.

So how does it help the environment? Let’s start by recognising that, as Haas writes, “the global wireless communications industry has a carbon footprint equivalent to the world’s air traffic.” Li-Fi relies on LED light bulbs. They cost more than the standard tungsten bulbs but they last longer and their energy use is up to 30% lower. The best way to illustrate how much difference this could make to your business is to look at the US Department of Energy stats which suggest that LED could reduce the amount of a household’s energy consumption devoted to lighting from 20% to 5%. They also don’t contain any hazardous mercury as compact fluorescent lights do. And, if the Wi-Fi HaLow standard delivers, it is expected to double the range of connectivity while using less power, making it perfect for such battery-powered devices as smartphones - and lends itself to that forthcoming blockbuster known as the Internet of Things.

Environmentally, the only downside is that their disposal is not that eco-friendly. That said, researchers are confident that will change over the next five years and the impact is mitigated by the fact that they still lost a lot longer than conventional bulbs.

So where does Li-Fi go from here? The technology is being developed in China, Dubai, France, Japan (where one of the people driving it is Shuji Nakamura, who was awarded the Nobel Prize in 2014 for his work on LEDs), the Netherlands, and the US where there is even talk that Apple will incorporate the technology into its future generations of smartphones. If that is true - and if rumours about Phillips’ interest are accurate - it will be a game changer for Li-Fi and, in consequence, for every industry that needs to deliver data.