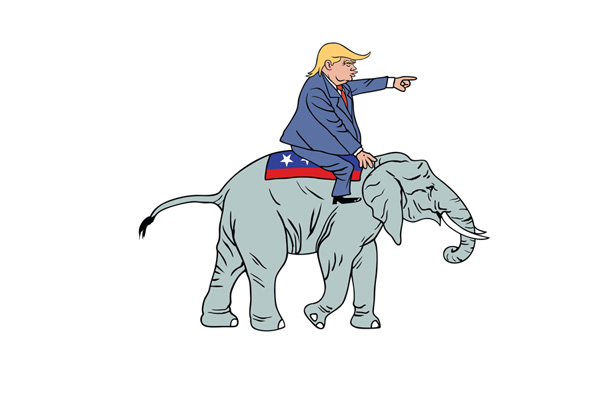 The head of the US herd may be calling to scrap America’s Environmental Protection Agency, but will he be able to trample all over European inroads to a greener land? Walter Hale thinks not.

Who gives a damn about sustainability? The question seems more pertinent than ever with US president Donald Trump seemingly determined to eviscerate America’s Environmental Protection Agency which, in his view, is strangling economic growth with its regulatory red tape.

On the campaign trail, Trump promised to scrap the EPA. Yet one of his aides suggested that rather than actually abolishing it, the new administration would subject the agency to death by a thousand cuts. The first priority seems to be withdrawing from the climate change accord reached in Paris in 2015, but federal plans to encourage clean power and limit car emissions are also likely to be axed.

Although business leaders always like politicians who promise a bonfire of red tape, Trump’s initiatives may not be universally welcomed in America’s boardrooms. US companies that sell to Europe will still have to be abide by European Union regulations and there is no consensus, on this side of the Atlantic, to roll back measures to protect the environment.

Sustainability is also shooting up the political agenda in China, where the leadership is under pressure from ordinary citizens to eliminate the kind of pollution that has prompted complaints on social media that Beijing is suffering an ‘Airmageddon”.

There is the possibility, raised by some think tanks, that post-Brexit Britain could ease up a bit on environmental regulations. Yet this wouldn’t especially help exporters to Europe and, to be fair, Theresa May’s government has not indicated that it has any enthusiasm for a Trump-style bonfire.

Trump may deny climate change but 16 of the 17 warmest years on the planet have occurred since 2000. Last year was the third year in succession that global temperatures set new records, according to NASA, the first time this has ever happened. Climate scientists - the very experts may sceptics refuses to believe - estimate that around 75% of this increase is due to the impact of homo sapiens.

No amount of alternative facts can obscure that reality. And the good news for print service providers inclined to do their bit to save the planet is that consumers give a damn about sustainability, even if some politicians don’t.

The printing industry’s customers’ commitment to sustainability may vary but the consumers who buy from the companies that buy print aren’t wavering. A recent Nielsen survey found, for example, that global sales of consumer goods from brands that have shown their commitment to sustainability have grown more than four times as fast as goods from brands that haven’t.

The interesting aspect of this is that we are talking about actual, tangible hard sales here - not just good opinions or vague pledges to pay more for sustainable brands.

How consumers define sustainable differs in intriguing ways. For some, it’s as straightforward as aligning with - and showing tangible support for - a respected non-profit. Others want to see proof that a brand has made strenuous efforts to reduce its carbon footprint. For a few, it’s enough to see the word ‘organic’ printed on a label.

The Nielsen survey also points out that sustainability is linked to a broader issue that every fast moving consumer goods company can understand: trust. Are consumers likely to trust a brand that buys its paper from a supplier that is destroying the natural habitat for orangutans? Are they going to have time for a brand that has contributed to a spectacular environmental disaster? And are they going to feel loyalty to a brand that pays lip service to sustainability but doesn’t actually do anything about it?

The answer in all these cases is probably not. (Look how long, and how much work, it has taken Nike to shake off claims of slave labour in its factory.) Which is why it makes sense for brands to act sustainably and make absolutely sure that consumers know they are doing so. That is also why it makes sense for print service providers to knock on customers’ doors and suggest how they can help them become more sustainable. The initiative might be as mundane as carbon offsetting, as basic as replacing one raw material with another, yet it could also be more audacious, showing them how they could form a mutually beneficial relationship with a non-profit - and publicise it - or re-engineer a process to save waste, energy and money.

As the pilloried merchants of ‘dead tree media’, printers have had to be environmentally conscious for some time. In some cases, they have thought more - and know more - about such issues than their clients. So they can step in and offer reasoned, disinterested but useful advice. And many clients do need guidance.

Being green is often not a straightforward, clear-cut either/or. To take one example from outside the industry: some years ago, it was suggested that British supermarkets should buy their flowers from Europe rather than, for example, Kenya. This was based on the belief that air miles made sourcing close to home was greener. Yet studies showed the environmental case was car from obvious - Dutch flowers did use up fewer air miles but, because of the climate, they also required artificial lighting, whereas the Kenyan flowers could bloom in natural sunshine.

Environmental choices are often not as simple as they first appear and printers can help customers make an informed decision, rather than being driven by soundbites, headlines or self-evident truths that turn out not to be supported by any evidence at all.

And sometimes even big companies fail to see the bigger picture - for example, do a succession of single initiatives work together to reduce the carbon footprint across the whole supply chain? Or do they just get in the way? Often, even the most well-intentioned changes have unforeseen consequences.

The other issue, that organisations ignore at their peril, is that a variety of Trumpism is much more common than we like to admit. Few of us may agree with his absurd suggestion that climate change is just a hoax dreamt up by China to hurt America, but there is, a study by Bain & Company found, an attitude among many employees that sustainability isn’t a business imperative. The report’s findings suggested that only 2% of corporate sustainability programmes achieved or exceeded their goals.

For many employees, it’s almost a case of ‘I’d like to save the environment but today I just need to get this order out.’ Others regard sustainability as a public reputation issue - we have to look like we’re doing the right thing - which can undermine their commitment when sustainability programmes are introduced or targets look difficult. Sometimes, the issue is as simple as companies failing to incentivise staff to do the right thing.

So to return to the question that started this article: does anyone still give a damn about the environment? The answer is a resounding yes. Septuagenarian American presidents may not care but consumers, especially the Millennials, do - and they matter because they’re the people who are buying stuff from the companies that buy stuff from print service providers.