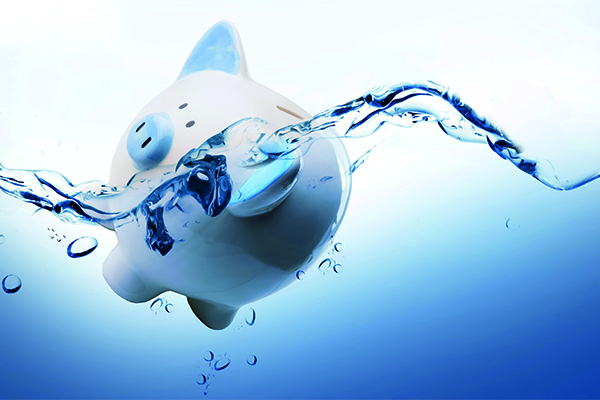 Excuse the headline pun, but you might find that your attitude to water could dampen your growth potential if not your very survival. Here’s how…

“Think about a company that relies on an abundant supply of free, or near-free, clean water as an input of its manufacturing and relies on the free, or near-free, disposal of unclean water as an output, or by-product, of its manufacturing. If that company isn’t thinking about how to adjust their business model for the day in the not-too-distant future what water is not going to be free, that’s too big a business risk to ignore.”

Andrea Choi sees sustainability through a different lens. As the chief executive officer of sustainable investing at investment bank Morgan Stanley, she sees the environment as a way of judging the strength of a business. Being environmentally conscious does not, in itself, prove the quality of a company. Yet equally, as her thoughts on the future of water suggest, why would you invest in a company where managers choose to ignore, overlook or not plan for such significant risks?

Apart from anything else, Choi argues, anticipating such a future can give companies a competitive advantage: “The company in the industry that is the most forward-thinking about how to monitor water use and impact and how to make their manufacturing processes more efficient are going to be the first to discover interesting product innovations in a more water-sensitive world.”

Water is just one example of how, Choi says, having a broader attitude to investing can give you a more accurate picture of a company’s performance. When you start factoring in sustainability, you could end up focusing on governance, employee relations, the organisation’s impact on the environment and the way the community responds to the product. This makes it easier to identify businesses that are profitable in the short term but uncompetitive in the long run. This rounded view and may explain why Morgan Stanley’s research suggests that, if anything, sustainable equity funds matched or exceeded the returns of traditional investment funds.

This was particularly striking for Choi because, she says, 54% of the funds surveyed said they had hesitated to make sustainable investments because they thought they would make less money. “For anthropological or cultural reasons, many people think that when part of your goal is to do good, it’s probably not a financial decision. We believe there are some significant opportunities for improving the environment and peoples’ lives that have a compelling story about growth and profit.” At the moment, 76% of the funds expressed an interest in sustainable investing but it accounts for only 17% of the capital invested.

Cynics might argue that institutions will always be willing to invest in businesses that are, at best, environmentally dubious and, at worst, bad for the future of the planet. Some are, but Choi says that we should not underestimate the power of individuals. As she said in her TED talk, “Individuals own almost half of all global capital, giving them - and us - the power to make a difference by investing in companies that champion social values and sustainability.”

The devil may have all the best tunes, as the saying goes, but he does not have a monopoly on the best investments. The idea that being green can be good for the bottom line is hardly new but when it’s being expounded by a banker whose job depends on delivering returns - as opposed to an impassioned tree hugger fretting about a forthcoming environmental apocalypse - it sounds much more persuasive.

So the message to print service providers is clear: if you want to avoid alienating potential investors, customers and employees, start thinking about those scenarios, like the future of water, that may affect your business model in five to ten years now and be ready to lead innovatively when that time finally comes.