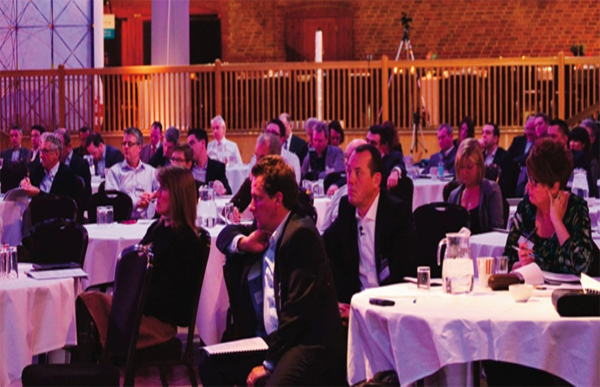 Step it up in terms of experimentation and integration or witness wide-format print missing the mark in terms of potential. So how do your respond to that key takeaway from the 2013 Fespa Global Summit?

Talk about giving it to us straight. No-one left the recent Fespa Global Summit without the clear message from speakers: move on or go down! Wide-format print has fabulous future prospects they all agreed, but for those prospects to be anywhere near fulfilled print producers need to significantly and speedily step it up in terms of experimentation and integration with other technologies and getting novel options in front of potential buyers. We’ve been saying that for ages – and day-to-day pressures and economies of running a print business are the oft-quoted reasons why it doesn’t happen as much we all recognise it should. But the outside world’s perception of print’s capabilities is falling way behind its technical and creative capabilities. So how do we right that?

Speakers at the summit provided something of a ‘must do’ list, the key points of which are highlighted here as bite-size topics that certainly deserve fuller debate.

First up – PSPs need to recognise that it’s increasingly all about the data. Big Data. And when it comes to who spends what marketing budget where, and whether print continues to get a look-in, it’s got to be about print’s integration with technologies that will deliver the stats the marketers are demanding.

In a workshop session ‘How Social Media is Changing the World Even More’ Laurens Bianchi, commercial director at Icon and Co, provided an example of how Big Data is being used – citing the Amsterdam City Card which can be used to pay for transport, entertainment, restaurants etc., thus enabling the card’s provider to track and profile the user’s behavior/spending patterns, and in turn provide incentives to enhance/change that pattern.

“Not only are marketers using Big Data, PSPs themselves can use it to analyse the data footprints their customers leave behind to create new opportunities for their own business,” enthused Bianchi. “Train yourself and your people on the subject to grow business opportunities.”

If you don’t do that, do at least learn enough to be able to convince marketers that you can integrate your print offering with technologies that will provide the data they so desperately want.

“Print needs to become interactive,” said Mark Fallows, EVP Creative Technology, McCann New York. “And PSPs need to be more collaborative. They need to embrace and test things like QR codes and augmented reality – be bold and take risks to move print on.

“It’s not so much about a ROI risk for printers going the integrated print route – the risk is more to do with what if they don’t. We’ll see a massive rise in mobile devices being used to navigate information – so print needs an integrated model. PSPs need to look at what impact their integration R&D strategy will have on their business longer term.”

Tim Green, director of wide-format technologies at Infotrends, said that in the last ‘World Wide Survey’ the question was posed: “Are you seeing an increase in customers asking for QR code integration?” 40% said  they’d seen an increase. That trend looks set to continue. And it’s not just QR codes that can help breath new digital life into print. Augmented reality, and now Near Field Communication (NFC) seem set to change the face of outdoor advertising. And that’s looking like a great thing   for print.

“The thing to remember is that every scan of a QR, augmented reality or NFC code generates data and makes print more valuable because they provide brands with the measurable interactivity they crave,” stressed Rob Rosborough, director of worldwide sales and operations at Scanbuy and speaking on how mobile engagement technologies can transform print into a digital media enabler – a transition that could be key to the future competitiveness of print in the outdoor ad space.

David McEvoy, managing director of JC Decaux put the theory into real-life context very aptly. “Outdoor [advertising] is all about digital – moving from print to pixels. All the Cromwell Road [London] ad sites are now digital. Digital is great. But I can’t afford to digitise all my outdoor sites so I need an alternative because the world wants me to show interactive digital content. And that is print incorporating Near Field Communication (NFC)” - whereby a passerby can hold a smartphone up to a poster and see content come alive.

“Everyone I know in the world of advertising is now talking about Big Data. Last year we did a trial called ‘Testing the Near Future’ which tested QR codes and NFCs on printed posters. 13 clients took part, including Mercedes, Morrisons, ITV. We did it for four weeks with content changing every week. With the project we got that Big Data – we could measure the interactions the campaigns generated (who was looking at what on which days etc.) The data showed one in four that scanned the print went on to ‘do something’ – a great conversion rate and conversion rates are hugely important to people. We concluded that NFC brings print alive.”

So watch this space! In Reading all the 300+ JC Decaux sites are now NFC enabled. Recently, Clear Channel announced it was going to equip 10,000 bus shelter panels with NFC and QR enabled codes on the side. JC Decaux is also putting 5,000 in, so there’s going to be a 15,000 strong network of NFC/QR code enabled bus shelters in the UK which will allow printed posters to become digital, interactive, locational. “Advertisers want digital. Print can give it to them. Integrating technology such as NFC will ensure print has a very vibrant future in the UK,” was the upbeat McEvoy’s stance.

But don’t take ‘the future’ to mean you have time to sit back and see what develops. “AR, QR, NFC etc.; these are not technologies of the future, they are now. PSPs can’t afford to put it off any longer – they must look right now at how to integrate print with these developments.” So said Simon Jobling, business development director at m2mend speaking on the subject of pattern recognition.

“Take augmented reality, which is really a printed code that basically says ‘go here and do this’. The vast majority of people have still not seen augmented reality and it has huge potential relevance across B2C and B2B sectors because it’s a technology that drives engagement – what a lot of people will pay dearly for.

“The rise in smartphones and tablets alone will drive augmented reality growth and print can act as the generating material for those experiences. And AR doesn’t need to be expensive. It’s worth having the discussion when you are talking to clients – to ‘sell’ the possibility of print with AR integration. It’s relevant across virtually all marketing sectors because of its ability to deliver interactive content very simply and there’s massive potential in things like exhibitions market.

The point having been stressed that collaboration between all parties can only improve the outlook for integrated print technologies, and that PSPs’ attitudes towards internal R&D needs to become more of a ‘can do’ one, it was hardly surprising that other speakers pressed for even more cross fertilisation of ideas.

“It seems to me that print, especially the likes of wide-format digital inkjet, has huge scope, but the companies producing it don’t do enough in terms of experimentation,” said Mohan Prabhaker, creative director, TBWA Singapore.

“I’ve found that if you create something with a bit of a buzz around it you get returns in the same proportion, so it’s worth experimenting to find what delivers that ‘wow’ effect.

“Photographers often come to me with really whacky and creative ideas – we don’t always follow though but sometimes we do and the outcome can be a really off-the-wall project that catches everyone’s imagination. Printers need to do more of that. They need to come to the agencies with some really creative ideas of how print can be integrated into a project or campaign.

“It’s not about creating ads any more – it’s about creating meaning for relevant audiences. Printers need to start experimenting and playing with stuff. It might not provide a direct ROI but could help create that major buzz attraction that puts you on the map. I don’t have enough of those experimental conversations with printers – well, hardly any. It’s time to forget that we’re creative versus production and work together.”

Cindy Bohm, director of project management, Saachi and Saachi is also looking for the experimental ‘wow’ factor. Having worked at various agencies over the years she says the creative department wants to know from print buying department within an agency what is possible within about two hours of delivering a brief. So she needs to know what is possible. As she and her team haven’t the resources to research all possibilities, she needs printers to come tell them. “It’s up to printers to reach out. We’re looking for people who will go above and beyond and how I remember people is if they’ve done an unusual project that sparks my memory.’

In talking to a client direct perhaps, rather than to an agency, that going above and beyond could be offering a service pinpointing how they could better target their ad spend. It’s all about wrapping up the marketers’ art with science as Michelle Adams, founder and president of Marketing Brainology explained when talking about shopper engagement in terms of how the brain works, and how that differs in men and women!

Research into the topic can provide insight into what type of POP/POS works best for what group of people for example, and Adams provided video evidence of ‘tricks’ that help engage customers in the retail space – such as aisle disruptors (novelty storage bins that can be seen 50ft away).

Also, neuroscience can be used to help print customers better understand what to expect from certain parts of a project: so they may want QR codes, but despite their potential they’re not for use everywhere. For instance, Adams said her work showed that shoppers don’t want them in-store as they don’t have the time or inclination to access them at that point because they are often running to a schedule and want to be in and out. But they might work particularly well as the bus stop outside the store. “Printers can investigate neuroscience to provide a real value-add service to customers,” offered Adams,

In a nutshell, the summit’s opening address by Neil Felton, Fespa managing director, Exhibitions and Events, is as good a closing statement given its overall message: “We need to educate everyone about the opportunities available with wide-format digital print and engage with others across the whole spectrum of other industries.”