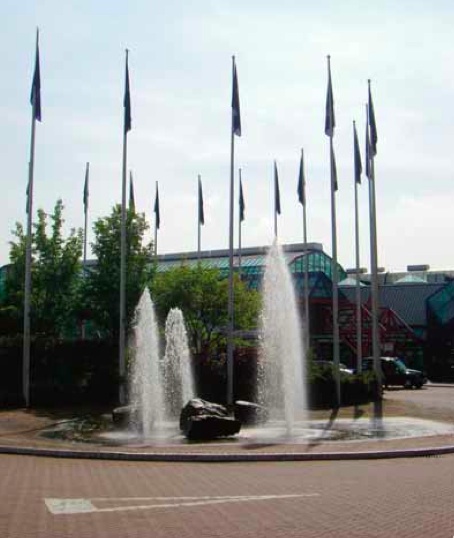 If you are you planning to attend Sign and Digital UK at the end of March, here’s what you can expect from the show in its 25th year.

Sandwiched between Fespa Digital and Drupa, Sign and Digital UK may see fewer product launches this year than it has tended to in the past. But as a UK-based show dedicated to the sign making and digital print sector it still promises to draw a crowd, especially those who don’t fancy hot-footing it to Barcelona or Dusseldorf this side of the summer.

In its 25th year Sign and Digital UK 2012 will be a mix of the established features visitors have come to expect and a couple of new additions, such as the Green Trail and the well publicised 25 Year Gallery showing print related images and artefacts covering the period from the show’s inception.

In this preview of the event we’ll cover the main show attractions plus provide a guide to some  of the more interesting stands and newest products aimed at the wide-format print sector.

Now in its third year, this workshop will again be presented by signmaker Paul Hughes of Western Signs and Printing. Details at: www.signuk.com

In celebration of the show’s 25th anniversary visitors will this year be able to see signmaking products and equipment from the last quarter of a century. There will also be photographs of those who have worked in and helped to shape the industry.

This is the second year for the awards which set out to recognise and reward both the creative and business aspects of the industry through ten category prizes. TV comedian Seann Walsh will host the 2012 awards event on 28 March at the National Motorcycle Museum, near the NEC, Birmingham.

Adobe is returning to the show for a tenth consecutive year and will again host a series of seminars. Terry Steeley will showcase the latest Adobe Creative Suite CS5 software including Adobe Photoshop Elements 10 and Adobe Bridge in addition to sessions on Photoshop, Illustrator and InDesign. The timetable is as follows (repeated daily):

(This session will not run on Thursday 29 March).

Free Corel Workshops run alongside the Adobe Theatre. The timetable below is for the first two days of the show. On the third day, 29 March, the morning sessions follow this programme but the afternoon session timings vary due to the earlier show closure.

Full details can be found at: www.signuk.com

Below is a selection of those showing something new and relevant to the wide-format sector, or worth highlighting because they’re doing something unusual at the show.

Antalis McNaughton will be unveiling a pan European range of wide-format papers, self adhesives, banners, textiles and wallpaper suitable for indoor and outdoor applications as well as more established ranges for POS applications, from the likes of Kapa, Forex, Dibond, Dilite and Foam-ex.

The stand will also showcase speciality grades including iPrint Pure 3D, a polypropylene material that offers a 3D effect on a 500 micron sheet, is tear, scratch and moisture resistant, humidity free and available in sheets and reels.

Also see Yupotako which sticks to flat surfaces without adhesive due to a micro suction structure, and Stafix – a static cling film.

Several demo areas on this stand will feature products being shown for the first time. These include Seri es 2600 Ultimate Premium Plus Premier Cast Wrap Film, which is a mu lti-layer colour film with clear protective film incorporated in one construction. It is available in matte and gloss with wet-look gloss, metallic and pearlescent finishes.

Among the wide-format and grand-format printers being shown will be the new Jetrix 2030 and samples from the new Novus Imaging Synergia H printer with Aquapoxy inks (launched at SGIA 2011). Also on the stand will be the new Seiko W64S with iX inks to provide an eco-solvent, low-odour wide-format print solution, and the latest Mutoh Kona cutter.  DPI will also run a competition for two tickets to a British Super Bikes (BSB) event.

This year Doro will champion its range of vehicle wrap films. Under the banner ‘doro-wrapz’ the range will include the Gemstone series plus the 670 cast series, both from the Ritrama stable, and a selection of 3D textured carbon fibre effect films. Brand new to Doro is a range of four matt colours. As part of the show’s Green Trail Doro will also be presenting eco-friendly media including alternatives to gloss vinyl and PVC banners.

The focal point of this stand will be the new JetMounter Fuzion63 laminator, a wide-format roller laminator with heat-assist top roller, as well as its AFC1600 SmartCoater, an aqueous liquid coater that boasts enhancements such as variable speed heater fan, quick release mayer bar and auto run out.

Drytac will also showcase its UK-manufactured overlaminates, including new additions such as the Weathershield range - a European seven-year rated polymeric pressure laminate - and some new additions to the European three-year rated Interlam range.

This manufacturer of display products is launching a monitor holder to help companies incorporate digital signage. It will also be showing its new Mediascreen 1 retractable roller banner of 1500mm along with an extra large Mediawall pop-up of 2700mm high.

Fujifilm will showcase its Acuity LED 1600 for the first time in the UK at Sign and Digital UK 2012 alongside its new XMF Web-to-print system and the latest additions to its euromedia brand of media for large-format printing.

The Acuity LED 1600 hybrid printer will be at the heart of Fujifilm’s stand, on which the company will also demonstrate how the XMF PrintCentre can enable print companies create a 24/7 operation. In addition, Fujifilm will show off euromedia brand in a ‘hands-on’ environment.

The show will be used by Granthams to promote its latest solutions for wide-format digital output, including new printers and technologies that will be launched at the show.

The company intends to announce the imminent launch of a new label printer and hopes to have an example of this at the show. It will also demonstrate its flagship FC8000 and budget-priced CE5000 plotter/cutters.

The GrafiPrint media range (which includes GrafiWrap vehicle wrap) will be demonstrated in use on various printers and print-and-cut machines at this event, including the VersaCamm VS and SP range, VersaStudio BN-20 as well as the VersaUV LEJ-640 hybrid from Roland and models from the Mutoh collection.

GPT will demonstrate the latest solvent, UV cure, dye sublimation and aqueous printers from Mimaki, Epson, Canon and Agfa as well as flatbed cutters from Zund, and Rips from Shiraz, Wasatch, and RasterLink.

HP, which will show the recently-introduced HP Designjet L28500 and L26500 latex printers among its plethora of print kit, will also hold live on-stand demonstrations with vehicle-wrapping expert James Deacon.

New printers, inks and environmental initiatives are to be announced at the exhibition by Mimaki’s exclusive UK and Irish distributor Hybrid Services.

The Jetrix 2030 will get its official European launch at Sign and Digital UK. This is the fastest printer yet in the Jetrix range, with a production speed of 55m2/hr. It also features Light Cyan and Light Magenta along with White ink options and has a primer function for printing on to the likes of glass and metal. The oversize flatbed can take a 2m x 3m board and print it edge-to-edge. There is also a roll-to-roll option.

Triangle inks and its UK and Ireland distributor Josero will share a stand that will also display inks products (including spare parts such as printheads, dampers and wiper blades for both wide and superwide printers). The companies will demonstrate Roland and Mimaki printers running Triangle inks via cartridge and bulk feed systems.

The new XLD 170 is the most flexible of all Fotoba cutters and designed to trim flexible media output (rolls and sheets) up to 17m width. The XLD 170 utilises the Fotoba Cut Marks which are embedded in popular software Rips and, regardless of misfeeds, will automatically re-align itself to the edge of the printed image. The XLD 170 cutters can handle most flexible media up to a thickness of 0.8mm including polycarbonate, photo paper, film, duratrans, TDF, canvas, laminated or encapsulated prints.

Mutoh, which will introduce a new printer at Sign and Digital UK, will be exhibiting at this year's show in co-operation with its key reseller Colourgen. Products on display will include the new ValueJet 1324/1624 Eco printers featuring new printhead technology as well as the new ValueJet TD series direct-to-fabric printers, available in 165cm and 260cm widths. Visitors will be able to attend live demonstrations of Mutoh’s entire range of products for commercial print, signage, print-to-cut, dye sublimation and direct-to-fabric applications.

Hear about the latest in digital textile printing technology from this company which has over 40 years experience in printed textiles. RA Smart will be showcasing some of its customers’ products printed on various dedicated textile digital printing systems as well exhibiting the latest dye sublimation technology from Mimaki and Transmatic.

This specialist consumables supplier will be showcasing Colorific’s new range of media.

See the ‘Outlook’ style Shuttleworth MIS User Interface launched in October 2011. It includes a drag and drop capability from Outlook, a built in dashboard and enhanced reporting. Also at the show will be Shuttleworth’s Electronic Proof of Delivery (POD) developed specifically for this market. And see the ‘Supply Chain Management’ software, a first for the sign industry. This is a Web based tool designed to enable manufacturers to quickly get prices from their suppliers so they can respond immediately to their customer needs. Hosted by Shuttleworth it requires no infrastructure investment to take advantage of the functionality. It is all delivered over the Web.

A newcomer to the world of coated inkjet media, Sihl Direct UK will show its specialist materials for wide-format inkjet printers and ink technologies, such as canvas, vinyls, photobase papers and films.

A vehicle wrapping area will feature three workstations where visitors can try their hand at applying colour change and digital printing films, including 3M and Arlon wrapping films for surfaces with deep recesses and for gently curved surfaces, as well as William Smith’s own brand of solid colour wrapping film. Displays and interactive demonstrations of window films will include Contra Vision Performance perforated window film, 3M Clear View Graphic Film 8150 for graphic and decorative applications, as well as protection, privacy, safety and security films.

There will also be interactive demonstrations of the RollsRoller Flatbed Applicator and two of the latest HP Designjet L26500 series latex printers.

Following the introduction of G3 in 2008, Zünd Cut Center Software in 2010, and the fully automatic Board Handling System in 2011, Zünd will continue its string of releases at this show with the S3. This new cutter has been built for speed and is capable of processing a wide range of materials, including textiles, vinyls, films, thinner plastics and cardboard. Its capabilities can be extended with creasing tools and a 300W router insert.

What technical issues do you still need resolving?