It is 14 years since we conducted the first Widthwise survey of the UK/ Northern Ireland’s large-format printers. We’ve probably seen more disruption in the marketplace in the last year than we did in all of those previous ones put together, and 2021 is proving to be ‘the great reset’.  What that means for PSPs in this sector is where we hope to shed some light IN our 2021 Widthwise Report, published alongside this issue. You can download it at https://imagereportsmag.co.uk/widthwise, but here’s a précis of the key findings to whet your appetite.

The worst of times has been the best of times for some. That may not be what you want to hear if Covid has just about sunk your business but, thankfully, according to the 195 large-format orientated UK/Ireland-based print businesses that answered our 14th Widthwise poll at the start of 2021, the sector has not fared too badly. That’s not to say it hasn’t suffered of course. Almost half (47.69%) had to cut staff levels, and a whopping 81.03% said they had needed to take advantage of Government aid during the pandemic.

Asked if, in the short to medium term, they felt overall demand for large-format print in the UK would return to pre-Covid levels, almost two-thirds (63.59%) said yes, with 12.82% giving a decisive ‘no’.

The findings come from a cross-section of PSPs, all of which handle large-format digital inkjet print. To put things into perspective, 60% of the 195 companies had five staff or fewer, while slightly under 15% (14.88%) had 21 employees or more - nine companies polled had more than 100 employees. Almost half (48.72%) of those that responded reported a turnover under £250,000, though 7.69% had a turnover of £5m or more.

A good number (45.64%) of the sample said they had restructured their business during 2020, with new markets, new print - and non-print - applications, and ecommerce having been a focus for many, but with workflow efficiency measures at the top of the list, with 32.31% earmarking this as a key change. Asked about likely strategic moves over the coming two years, more than half (57.95%) of companies said further improving workflow efficiencies would be a top priority.

So what else is on the priority list? Well, not necessarily investment in new kit and software, a key priority for so many companies for so many years. Asked how much they were expecting to invest in new hardware/software right across their business in 2021 compared to 2020, a third (32.31%) said more, but another third (32.82%) opted for a zero spend in each period.

Interestingly, given that so many PSPs said they had been/would be on an efficiency drive, under one in ten (9.23%) said they would be investing in Industry 4.0 (eg the Internet of Things, automation, AI, remote diagnostics etc) in the year ahead.

Nigh on two-thirds (65.13%) of respondents said they would be spending under £20,000 on large-format technology specifically over the next two years, and 77.08% said there would be no investment in software or finishing kit.

Half (50.26%) said they were expecting to buy a new wide-format printer before the start of 2023. UV curable hybrid printers came out top of the wish list, with 34.62% of those planning to invest selecting that technology. Next in the planned purchases popularity contest came solvent printers, with 30.77% earmarking those despite the furore surrounding the need for the large-format print sector to green-up.

So, how important do respondents think it is to improve their green credentials? It’s hardly surprising that 70.77 said it had become more important for them to be seen as environmentally friendly than it was two years ago - and 67.18% said they do now have environmental accreditations. What might be more surprising, is that 43.08% said few clients ask to see these credentials/policies, and 21.03% said none do.

When it comes to priorities and concerns going forward, the poll confirmed what we’d all expect - that growing turnover is the key focus for almost half (47.18%) this year, while the rising cost of supplies is what gives 85.64% the biggest headache.

A fear of further lockdowns, worry over paying back Government loans, uncertainty about UK economic bounce-back were all flagged up as reasons for sleepless nights, yet that fabulous optimism prevails. Let’s hope it’s well founded. 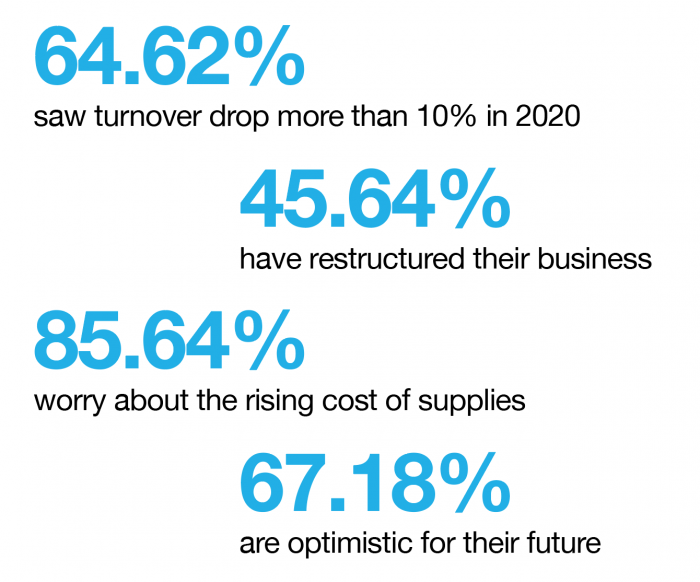