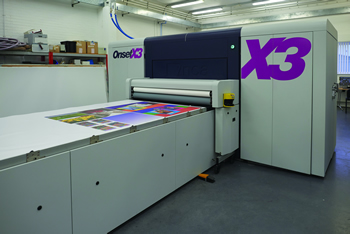 Conventional wisdom says that we can choose between speed or image quality, but Inca Digital’s new Onset X3 promises both. Nessan Cleary put it to the test.

Inca Digital has carved out a reputation for fast flatbeds aimed firmly at the top end of the market. The biggest of these is the Onset series, built by Inca but sold by Fujifilm, which also supplies the printheads and inks. These are physically big machines, taking boards up to 3.2 x 1.6m and 50mm thick. We’ve seen several iterations of Onsets over the years, but the latest set is the Onset X family, announced at the end of last year.


The X series marks a move to a new platform that can accommodate up to 14 colour channels, with up to 392 printheads. There are three distinct models, depending on the number of heads fitted. The base model is the X1, which can be configured with up to eight channels with four used for a single set of CMYK inks and the remainder for any combination of light magenta, light cyan, white or orange. This can produce up to 560m2 or 112 full-bed sheets/hr. The X2 gains an additional six-channel carriage so that it takes two sets of CMYK with up to six channels available for other colours. It can handle 725m2 or 145 beds/hr.

The top of the range X3 uses the full 14 channels, including three sets of CMYK, and can produce 900m2 or 180 beds/hr, making it the fastest printer of this size currently available. Inca claims that these are real world speeds that also take into account the time needed to load and unload the media from the bed.

The heads themselves are a new addition to the Q-class family from Fujifilm Dimatix, with a choice of 9, 14 or 27 picolitre drop sizes. John Mills, CEO of Inca Digital, says that 14 picolitres is the sweet spot. It’s also possible with the 14 picolitre heads to vary the drop size from 11 to 17 picolitres so this is likely to prove the most popular option.

These heads have a recirculation feature built in so that white ink in particular can be recirculated in the heads as well as in the tanks and ink channels. This in turn should remove the need to ‘spit’ ink from the heads, saving both time and ink. Mills says: “The underlying technology in the heads is key to this machine because if you have 392 heads in a machine then you don’t want to replace them.”

The Onsets have had a modular design for some time now, which Inca calls the Onset Scaleable Architecture. It’s easy to reconfigure the machine in the field from, say, an X1 to an X3. Mills points out: “We can completely change the target market for the machine simply by changing the printheads with different nozzle sizes.”

Reduced masking
Inca has come up with a unique way to ensure the table is completely flat – with a built-in sensor that measures the profile of the table and then prints a shim to even it up.

Inca has also redesigned the vacuum table for the X-series in a bid to speed up productivity by cutting down on the amount of masking that’s needed. The bed has 25 zones that can be grouped and stored to reflect commonly used board formats. The printer can cope with up to 25% of the holes being left uncovered and there’s a choice of skins for different applications.

There’s an optional productivity pack that adds shutters to cover the printheads to prevent stray ink from clogging the nozzles, which also cuts down on the need for masking. It also includes an adhesive roller system to remove debris from the substrates and a roller to improve printing to corrugated boards.

Maintenance
There is a start-up procedure in the morning that takes about ten minutes. Heather Kendle, director of sales and marketing for Inca, explains: “There’s an automatic clean and then we go through the nozzle mapping process which is an automatic chart that it prints. The on-board scanner looks at the state of the nozzles and it suggests which nozzles you should map out to get the best print area.”

There’s a further cleaning stage at the end of a shift, which might involve manually wiping some of the print slices, as indicated by a nozzle print test.
Inca has also improved its onboard Vision software that monitors how each Onset is performing. This sends information back to Inca, which can warn customers of potential problems.

This maintenance is a key part of Inca’s philosophy. Mills explains: “We believe that we should not ever have to change a print head in the field because that affects productivity.” It’s obviously working as Inca claims that 75% of Onsets didn’t need to change a printhead in 2014.

Our standard test consists of printing two A0-sized files - one of mainly solid Pantones and the other mainly photographs. Both are printed using the printer’s highest quality mode, to evaluate the image quality it’s capable of, as well as with a standard production mode, to see the sort of speeds you can expect from day to day.

The sheets are laid on the bed, which then moves under the main body of the printer. The printheads are on a shuttle that scans across the sheet. The standard production mode is four passes, which can print around 180 full beds per hour and took just 11 seconds to print both our charts together. The four-pass print quality was excellent, though there was some slight banding in the gradient of the reflex blue panel. The text was readable at four point and actually just about legible at three point, though the reversed out text panel was poorer. However, there are a number of options for varying the curing to give different effects. So we tried it again, this time with a fifth curing pass to a four-pass print. This produced much more saturated colours, with the solid Pantones in particular being noticeably better because of it. Some of the photographs also appear better, typically those with more reds and yellows due to the saturation. The actual resolution remains the same. But the key thing is that its still only using four passes, so the ink usage remains the same, with only a small time penalty - 18 seconds to print both charts - but much better results.

The best quality mode uses eight passes, which took 23 seconds to print both our charts. The image quality is excellent with no banding or other obvious artefacts. The text is slightly sharper, mainly due to more curing preventing the ink from spreading.

We also tried an additional two-pass mode that’s not part of the published spec for the printer. This provide to be incredibly fast - eight seconds to print both our charts together on an 8 x 4 sheet of paper, which would equate to ten seconds to print the whole bed.

The two-pass mode shows distinct banding in the solids - you might get away with it for billboards that are viewed from a distance but not for any kind of point of purchase work. However, the photographs at this speed are quite acceptable, even for close up viewing, which is quite astounding given the speed of the printing. Some of the photographs have some artefacts but only noticeable from close up viewing, and solid backgrounds such as large shadow areas also pick up banding but overall this mode is easily good enough for most photographs. Even the text has reproduced well, easily readable down to four point though the reversed text hasn’t done so well.

Conclusion
The Onset X is aimed firmly at high volume users, but at this level there’s a balance between productivity and image quality. Happily, Inca appears to have got this about right, with excellent image quality at lightning fast speeds.

Of course, a fast printer is only part of the equation and so there’s a choice of loading/ unloading systems. This ranges from semi-automatic systems, where the operator loads the boards and they’re automatically unloaded, through to fully automated systems.

The price depends on the configuration of each individual machine but expect to pay somewhere around £1m.