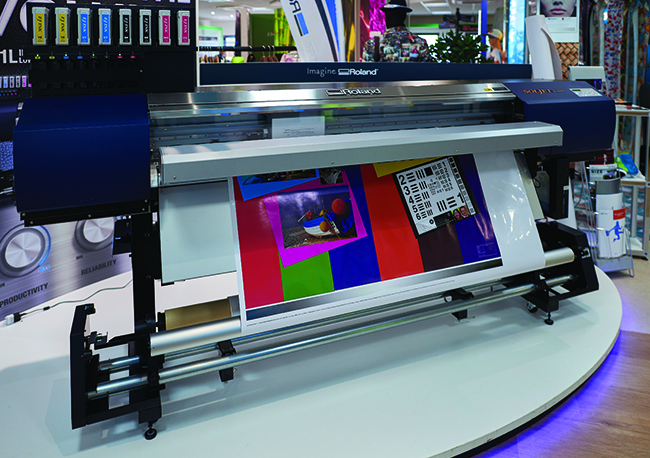 The SolJet EJ640 is the latest in a long line of solvent printers from Roland but does it have anything new to offer? Nessan Cleary put it to the test.

Solvent printers remain the backbone of many sign and display bureaux and the fact that several new models have been launched recently suggests that this isn’t going to change anytime soon. This month we’ve been looking at one of these new printers - Roland’s SolJet EJ640 - first announced at the end of last year and available since the beginning of last month.

This is a 1.6m roll fed eco solvent machine, capable of producing up to 102m2/hr. Mark Elvidge, Roland UK’s print product manager, explains: “We’ve designed this machine to be deployed to the high volume users - people who are still using a wide-format machine but are almost in the grand format area as far as volume goes.”

There’s a choice of ink configurations: one set of seven colours including CMYK plus light cyan, light magenta and light black (they double up the magenta to fill the extra channel); or two sets of CMYK which doubles the speed, because it halves the number of passes needed.

You have to choose the inks when you set the machine up and its not easy to change configurations as the ink lines would need to be redone. The printer includes a bulk ink system so that the cartridges feed into an internal reservoir. With the dual CMYK setup the printer automatically switches to the next cartridge as one runs out.

The ink itself comes in one litre containers and costs £94.95 per litre. Elvidge says: “We think all our inks are fairly priced. But having one litre capacity means there is less changing and we can offer a reduction in the ink costs.”

The price includes Roland’s own Rip, VersaWorks Dual. This looks similar to the older VersaWorks but has been completely rewritten beneath the hood and is now based on a Harlequin Rip from Global Graphics, where the older version was based on Adobe PostScript. The result is much faster Ripping speeds, which helps to speed up the overall productivity and keep jobs flowing to the printer.

Elvidge adds: “The Dual name implies that we have the capacity to process two native files, PostScript and PDF so we get a much better image reproduction when looking at high quality layered files and transparencies.”

This Rip has most of the features that one would expect for wide-format work, including nesting, tiling and variable data. It records details about the printer status such as when a job has finished and the ink levels and it can send email alerts. It’s also possible to extract this data to a database or spreadsheet, though it’s not really set up to send data to an MIS.

It’s possible to linearise and create media settings but not to create profiles. For that you’ll need an X-Rite spectrophotometer and its software - there’s no support for other makes for colour management. You can also choose between monitor profiles for viewing proofs on a screen. Naturally it supports Pantone libraries and can be used to change spot colours on a job without having to edit the artwork itself.

This Rip can run up to four printers, though you will probably have to increase the computing power available to maintain throughput. It only works on PC - Roland supplies a different Rip, Roland PrintStudio, for use with Macs. Roland has also started adding support for its cutting devices for a complete print and cut workflow. However, there are no plans to support any kit from other vendors, with the exception of Fotoba cutters.

Naturally all future Roland printers will use this new Rip and Elvidge says that the company is still investigating whether or not it can offer an upgrade for the older machines to the new VersaWorks Dual. However, Roland will continue to make free updates available for the new Rip, as it has done in the past for the older version.

The printheads are Epson DX7, with two arranged in a staggered configuration. There doesn’t appear to be a crash sensor, though there are guards around the heads and Roland is obviously confident that this is sufficient as the warranty does cover for accidental damage to the heads.

There’s a three-way heater built in and a further, optional heater that fits across the front and costs £2,499 and is useful for high volume work.

Maintenance has been greatly simplified. The machine has a wiper that will wipe the face and the sides of the print heads though Roland recommends a manual check once a week to make sure that everything is clean.

It takes a standard power supply - though it needs three plugs for the powered take up, heater and printer.

Roland offers three levels of warranty service - the price includes the first year’s Silver warranty, which allows for parts, labour and transport as well as telephone technical support and a service visit.

The printer also comes with the take up roll, which takes up to 40kg, plus a place on Roland’s Intermediate Digital Print Course. There’s an even an iPad app, Roland Printer Assist, that allows for some remote functions such as starting the print queue.