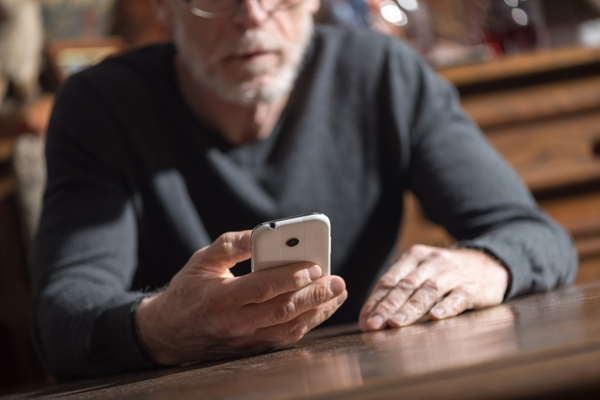 The iPhone has peaked. You can read that a gazillion times a day in certain parts of the internet. Yet whatever the sales prospects for Apple’s core product - and, let’s remember, the iPhone 8 is due out later this year, to celebrate the tenth anniversary of this breakthrough technology - the smartphone has only just begun to transform the way we do business.

True, there is a limit to how many more of us mobile phones can be sold to. As long ago as 2015, Ofcon estimated that 66% of British adults had one. (That proportion rises to 90% for 15 to 24-year-olds). One in three of us use our phone rather than a laptop or a PC to access the internet. There is more scope for growth in other markets - by 2020, it is estimated that another 380m Chinese will be accessing the internet from their mobile phones.

The technology has evolved so fast that it is easy to forget just how fundamentally the smartphone has changed our daily lives. We use them to text, search, shop, bank, photograph, video call and map our journeys. Yet this is only the beginning. In the words of tech blogger Mark Hibben - talking about the iPhone but it applies to smartphones in general - “It’s full potential, even now, is not fully realised.”

Why does he think that? For a start, because the iPhone 7 is carrying around more processing power than PCs did ten years ago. Yet also because, Hibben argues, Steve Jobs, Apple’s product architect, set out to endow his greatest creation with the kind of features you would get on a PC. And he did so, Hibben suggests, because he felt that to truly fulfil its potential, the iPhone’s ultimate destiny was to evolve into a personal computer.

It hasn’t quite worked out like that because the committee that rules product development at Apple under CEO Tim Cook is far more cautious than the visionary Jobs ever was. At the moment, no one is going to do their job by spending eight-ten hours a day staring at a 10 -13in screen. Yet If iOS enabled the use of external monitors and cursors, the iPhone could become a much more effective office tool.

Hibben finds Apple’s reluctance bizarre: “Apple is pioneering the core technology, ARM architecture processors, that is making the traditional PC obsolete. This technology is making it increasingly unnecessary to use a desktop, or even a laptop PC. The iPhone (and its cousin the iPad) is still a breakthrough waiting to happen. The iPhone is still waiting, almost bursting at the seams with unfulfilled promise, to finally demolish the PC era.”

The clear implication here is that if Apple doesn’t take advantage of the convergence of technologies that it is driving, other smartphone brands may well do so. So far from having peaked as some technogeeks - infatuated by the allure of mixed, augmented and virtual realities - would have us believe, the new empowered smartphone could become the core workplace technology over the next five-ten years.

To be clear, there are many tasks that computers do for a print service provider that will continue to be handled that way - especially in the pre-press and production process. Yet many departments - such as sales and marketing - don’t need a PC per employee to do their work. Some staff may not even need their own external monitor, being able to do everything on their smartphone.

Smartphones are changing our expectations of work in ways that we don’t always recognise. The apps we use on them are, though not flawless, incredibly convenient. As consumers, we have become accustomed to the simplicity of such products as the Amazon shopping app. Yet as employees or managers, too often, we have to wrestle with complex, time-consuming legacy software and hardware that really isn’t fit for purpose. The only reason this problem isn’t more widely recognised is that most businesses don’t quantify the time an individual takes, for example, to place a purchasing order.

The remark “there’s an app for that” has become something of a cliché but it should be driving the development of the next generation of software and systems for many parts of the business. Why shouldn’t a senior manager come out of a meeting and use their phone to order the supplies required to meet a larger than expected customer order? Why should they have to wait until they return to the office and struggle through systems that contain such helpful features as a button that says ‘Next step’ which, when pressed, says ‘This will take you to the next step in the process’? Or why should they have to get a colleague who is in the office to do it for them? (As a rule of thumb, the fewer people ‘touch’ a transaction, the more efficient you are and the better your margin.)

Equally, when they come to file their expenses from that trip to the customer, why should they have to come back to the office and do them on paper? It is estimated that 70% of UK businesses still use spreadsheets or paper to manage expense claims. Enabling employees to take a picture of a receipt, and file a claim by accessing the Cloud through their smartphone, is much more motivational and productive, freeing up time for them to do something more useful to the business.

The list of rewarding applications doesn’t end there. Using Cloud-based apps, a managing director of a print service provider can share documents, file VAT returns, monitor business performance, review key accounts and, through a messaging service such as Slack, improve communications with staff (and, if so desired, customers), manage appointments and make sure their website is as smartphone-friendly as their rivals’. They can also put an end to that frustrating ‘I know it’s here somewhere’ scramble through the inbox as they try to find that vital email or urgent travel itinerary.

Used carefully, phones can also be a useful marketing tool, alerting customers to events, offers and rewards. You may want to create your own app - although you need to think hard about the ROI and, in particular, the resource required to ensure that it remains timely and relevant - or use your phone to reach out to existing and potential customers via social media.

The other fiendishly clever thing about smartphones is that staff like using them - and they particularly enjoy the freedom they give them to work anytime, anywhere. Although the ‘always on’ 24/7 work culture has its downside, many staff relish their mobility. One wireless company says that the right, mobile-powered, approach to flexible employment can increase employee output by 16% and boost staff loyalty by more than 20%.

The old school approach, exemplified by one American consultant who identified personal use of smartphones at work as a “silent killer” of businesses, is falling out of favour. Mobile technology does blur the distinction between our private and business lives but, as long as half your staff aren’t spending hours of every working day playing Angry Birds, that blurring is as much a boon to employers as a bane.

The suggestion that the future of your business is in the palm of your hands sounds like a dreadful, cheesy sales pitch. Yet it just happens to be true.