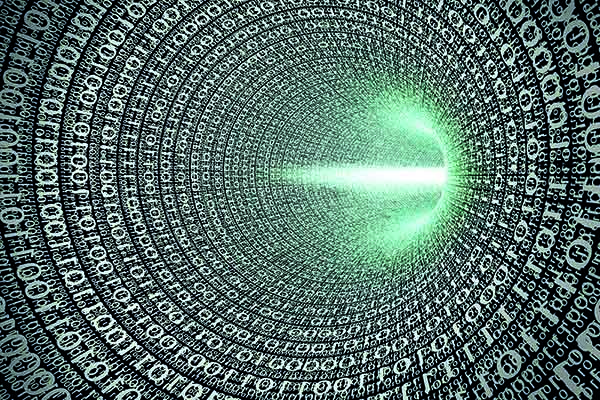 Walter Hale looks at the developments in quantum computers and whether the technology could take business into another dimension.

Fast forward five years from now. A customer asks you if you can print their job on a substrate you have never come across before. The innovative new material is supposed to give the print extra vibrancy and promotional oomph. Even your production manager looks a bit bemused at the request but, turning to the shiny new quantum computer installed a month ago, he keys in some information, asks the computer to do a few calculations and comes back to tell you - and your customer - that you can do it, with a few tweaks to the machine and the consumables as long as you use the profile the computer has just generated.

This sounds too good to be true - and at the moment it probably is. But it may not be in five years. The bottom line, as Harmut Neven, who heads Google's quantum computing drive, puts it: "The techniques that make classical computers faster are peaking." This leaves the computer industry with two choices: invest more in existing technology, knowing that each dollar spent will generate diminishing returns in terms of computer power, or look for something completely different. And quantum computing is that something different which the likes of Google, IBM, Intel and Microsoft are investing heavily in, believing that it will lead us to a new age of computing.

For once, hyperbole could prove to be an understatement. Geordie Rose, a former and wrestler who has founded Canadian quantum computer firm D-Wave, told ‘Wired’ magazine: 'What we're trying to do us build the most kick-ass computers that have ever existed in the history of the world." Kick-ass doesn't even come close to describing the transformational promise of quantum computers.

In the 1980s, maverick physicist and bongo drum enthusiast Richard Feynman suggested that if you could control the properties of subatomic particles, which are less stable and much weirder than anything in the macroscale universe, you might be able to invent completely new forms of computing. It sounded like an intriguing idea - but no more than that - until 1994 when mathematician Peter Shor developed a quantum algorithm that could analyse massive numbers and find the prime numbers used to create them. As multiplying prime numbers is the basis of modern cryptography Shor had effectively created something that could break all codes.

Bizarrely, this idea had been mooted two years earlier, in the comedy thriller ‘Sneakers’, starring Robert Redford and Sidney Poitier. In Phil Alden Robinson's movie, the code breaker leads to murder, intrigue and the bankruptcy of the Republican Party. In real life, Shor's work got a lot of people very worried and sparked the quest to create a computer that could use such an algorithm. That quest led to the development of quantum computing.

The core of the quantum computer is the quantum bit (qubit), a basic unit of information like the 1s and 0s represented by the transistors in conventional computers. Qubits are incredibly powerful because they can do two things that ordinary bits can't: they can represent 1 and 0 at the same time and, through a phenomenon known as quantum entanglement, they can affect other qubits, even when they are physically separated.

The theory is that, if we can make computers with these properties, they could be able to work exponentially faster than any existing computer - even supercomputers - and handle much more complex problems. When 100,000-qubit systems are available - which could be within the next decade - these machines will be able to make such accurate molecular models that they will be able to discover new drugs and materials.

That's the theory but where are we in practice? Though some smaller quantum computers are already available we are certainly not at the stage where you can nip down to PC World and buy one off the shelf. Yet this technology could become commercially available in the next year or two if Google, IBM, Intel and Microsoft make good on their investments,

The properties that make quantum computing such a transformational technology have, till now, been responsible for slowing its development. Able to be 1 and 0 - and react with each other - qubits are not the most stable or resilient units of information. They can be disrupted by noise, vibration, a single molecule of air and the presence of electric fields, which makes them error prone. The only way to correct these mistakes is to put in a lot of expensive extra computer power. This has meant that many of the machines that have been developed only use a small number of qubits, which kind of defeats the object because they are not really much faster than conventional computers.

Yet QuTech, a Dutch research institute with links to Microsoft, is pioneering a new approach that could overcome those problems. Professor Leo Kouwenhoven told ‘MIT Review’ that his unit is building qubits that are inherently protected like, to use his analogy, knots on a rope. "Despite deforming the rope, pulling on it, whatever, you don't change the information." Intel, which has poured money into the same lab, has also priced that quantum circuits can be made on traditional silicon wafers, which is much more cost effective.

The more stable qubits are, the easier it is for researchers to scale up quantum computers, use less computational power to correct mistakes, and create machines that will make existing computers look slow.

Neven says Google's quantum computing team is on schedule to build a 49-qubit system one year from now. If he is right, things begin to get really interesting. The 50-qubit threshold is known as quantum supremacy - the point at which no classical supercomputer could handle the exponential growth in memory and bandwidth required to match the power if its quantum counterpart. Although some countries, notably Japan, are still developing faster supercomputers, the scientific consensus is that it would be physically impossible for any of these machines to handle the kind of complex calculations that quantum computers will be able to.

This infinite potential explains why the likes of Lockheed Martin, NASA and Google are so interested. Neven has already used existing, quite slow, quantum computers to develop more efficient algorithms for recognition of images (on smartphones) and cars. He also used it to test a function to detect when someone is winking on purpose and take their picture on its ill-fated VR system Google Glass.

There are, as Clive Thompson noted in ‘Wired’ magazine, two ways that quantum computers can develop from here. The worst case scenario is what technology writers call the microwave oven syndrome. In the 1970s, the microwave was hailed as the future of cooking. This was, optimistic futurists suggested, how every meal would be cooked. Today, microwaves are in almost every home but are primarily used to cook ready meals. They have not replaced traditional ovens, they have complemented them. This could be what happens to quantum computers - they handle certain incredibly complicated optimisation tasks (landing a craft on Mars, helping radiography to attack only cancerous tissues, making our smartphones recognise voices much more efficiently) but conventional computers do the other stuff. As Thompson writes: "Quantum computing has always been shrouded in sci-if hope and hoopla - with giddy predictions of busted crypto, multiverse calculations, and the entire world of computation turned upside down. But it may be that quantum computing arrives in a slower, sideways fashion. This may be how the quantum era begins - not with a bang, but a glimmer."

Yet Google, IBM, Intel and Microsoft have all placed substantial bets on what Thompson refers to as the transformative thunderbolt of technology. If they are right, quantum computers could usher in a new technological age. It's possible - but unlikely - that they could make our smartphones vastly more powerful. It's probable that they could transform the way computing is done in companies across most sectors. They could certainly offer PSPs the opportunity to handle more complex technical tasks with confidence. Even businesses that don't need to make incredibly tough calculations will still relish the speed at which qubits work.

Which way will the technology go? To answer that question fully may take ten years, but sceptics and enthusiasts should keep a close eye on Google's 49-qubit machine. How that performs should give us some clues as to whether this exciting new technology really will lead to a quantum leap in performance.