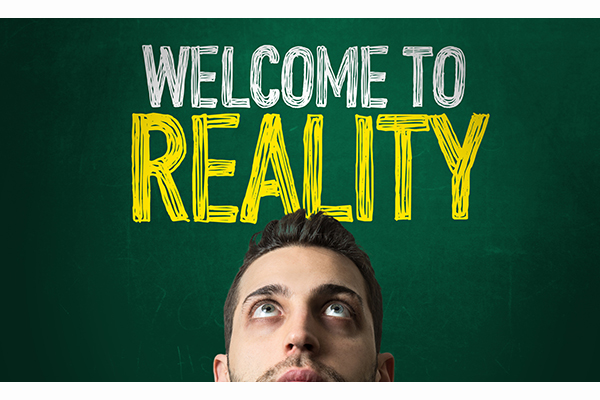 When mixed reality becomes, well, reality, how will you know what’s true and what isn’t? And how will that impact on visual experiences, including print? Walter Hale investigates.

Apple’s next smartphone - the hotly awaited iPhone 8 - is rumoured to mark the start of its drive to bring augmented reality to the masses. Yet technology in this area is moving so fast, that it may be behind the curve. Although we have all grown familiar with the terms augmented reality and virtual reality, the greatest curiosity is surrounding a company described as the most secretive start-up of all-time, a company named Magic Leap, so called, presumably, because its founders think its products will, when they come to market, provide a magic leap over anything that has gone before.

Magic Leap’s solution certainly sounds different. Founder and CEO Rony Abovitz, talking at a recent investor’s conference in the US, said that, while he was delighted that VR and AR were whetting consumers’ appetite for new kinds of computing, Magic Leap’s “spatial computing in a digital light field” was more revolutionary than either. “What we’re doing is a new class of computing. You can think of it as spatial and ambient, where it is contextually aware, you can be hands-free, you’re not holding up a phone and looking through a video display – it’s a totally new kind of experience. We’re trying to build a computer and force it to act like people act, and understand your world without having to tell it all the time.”  To distinguish this solution from AR and VR, most technology writers refer to it as mixed reality.

So how will this Magic Leap computer work exactly? What you are about to read sounds like utopian science fiction but products that work in this way - and offer some of the functions mentioned - are already being manufactured in Florida and their market launch in the US is, Abovitz says, “not too far away”. If the launch goes well in the US, the company will look to quickly roll the product out across the world. The technology is expected to break through in the entertainment sector - Warner Bros and Legendary Entertainment are two of the backers - but Abovitz believes his solution could revolutionise the retail sector.

When you’re wearing the device, it doesn’t block your view of the world; the hardware projects an image directly onto your retina through an optics system built into a piece of semitransparent glass (the product replicates the way we naturally observe the world instead of forcing you to stare at a screen). The hardware also constantly gathers information, scanning the room for obstacles, listening for voices, tracking eye movements and observing hands.

The headset can make not just a display, but anything appear, like directions to your next meeting, drawn in bright yellow arrows along the roads of your town. You will be able to see what that new couch you’re thinking of buying looks like in your living room, from every conceivable angle, under every lighting condition, without leaving your home. You could ‘try’ on a jacket or a dress in the same way. Even the least mechanically inclined will be able to repair their automobiles, with an interactive program highlighting exactly which part needs to be replaced and alerting you if you are doing it wrong. The clever bit - as far as Magic Leap is concerned - is that the company stands to profit from every interaction: not just from the hardware and software it will sell but also, one imagines, from the torrent of data it could collect, analyse and resell.

Kevin Kelly, the founder of ‘Wired’ magazine, sums up the spellbinding possibilities this technology opens up: “Experience is the new currency. Technologies like Magic Leap’s will enable us to generate, transmit, quantify, refine, personalize, magnify, discover, share, reshare and overshare experience. The shift from the creation, transmission and consumption of information to the creation, transmission and consumption of experience defines this new platform.” The danger, as various sci-fi novelists has suggested, is that this technology could create a world so seductive people will never want to leave it.

Peter Jackson, director of the ‘Lord Of The Rings’ trilogy, is one of Magic Leap’s advisers. After trying the technology for himself, he says: “I find mixed reality much more exciting than VR. Mixed reality doesn’t take you out of this world. Instead, it adds elements to our real world. And it has great flexibility. You can add as little as you want ­- a single tiny figure on a table talking to us - or you can replace the walls of a room with a skyscape so you can watch clouds go by.”

Does all this sound too good - or impractical - to be true? It does, but Magic Leap has already attracted interest from Google, JP Morgan and Alibaba and, after its most recent round of financing, was valued at $4.5bn. Google is so convinced it has pumped $542m into Abovitz’s start-up. This is astonishing considering that, at that point, Magic Leap hadn’t even released a beta version of its product for testing.

In part, such investments are inspired by Abovitz, a charismatic misfit who describes himself, on his Twitter bio, as a “friend of people, animals and robots”, draws cartoons that most people find weird rather than funny, has written a graphic novel and, while studying at Miami University, launched Mako, a business that built robots for surgery. That did so well that it went public in 2008 and was acquired for $1.65bn in 2013. The funds also flow because giants like Microsoft are betting so heavily on its potential. The company that successfully brings mixed reality to the masses could be bigger, ten years from now, than Apple is today. Yet Abovitz seems more focused on mixed reality’s life-changing scope rather than building a business empire, wondering, in one of his blogs: “What is software? If it can seamlessly transmit from blackberry to ipad to PC, why can’t our souls float as they will?”

There are obstacles to be overcome. No matter how compact and light the headsets become, they will require an enormous infrastructure to make them work. So Kelly says: “The scale of the servers, bandwidth, processing, storage, and cleverness required to run networked virtual places at the scale of the planet for billions of people is beyond Big Data. It is Ginormous Data.” And, as everything that is mixed, augmented or virtual can be tracked, each virtual world could be a total surveillance state. There is also, for style conscious Millennial consumers - a natural audience for this technology - that it is very hard to wear the existing headsets or goggles without looking like a dork. And the big question that we are still decades away from being able to answer is: what are the long-term effects of fooling our minds or bodies?

What is not in doubt that is quite a few people want this. Research by media agency J Walter Thompson found that 70% of American Millennials - and two-thirds of British Millennials - would like a company to use these technologies to showcase products in a more interesting way.

The potential for transforming the kind of displays and signage wide-format printers supply to retailers and brands is obvious. Equally, it could be possible, for example, to print a wallpaper for the British Museum that enabled the visitor to ‘see’ the battle of Hastings.

It may not be Magic Leap that makes the breakthrough. Apart from Microsoft, Apple and Facebook are interested in the technology and two Silicon Valley start-ups, Meta and Atheer have raised millions to fund their development. What is clear is that, in the next five years, we will be offered technology that will enable us to ‘mix reality’. The big question then - which even Abovitz, whatever his gut instinct tells him, can’t conclusively answer - is whether enough of us want to mix reality.

SGP pilot readies for take off

Over to you... Michael McNamara, Owner, Emerald House Associates www.emeraldhouse.co.uk

A breath of fresh air