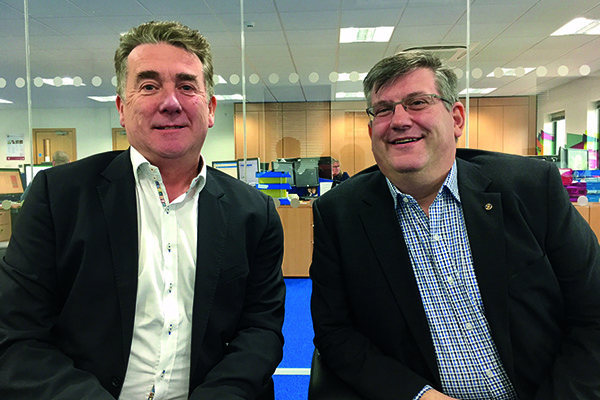 Roland DG is undergoing a transformation to boost turnover and profit. So what does that mean for its customers in wide-format print?

Roland DG is transforming its business, to take it from what was a Y48.7bn turnover operation at the end of 2016 to a Y76bn one by the end of 2020 - and, crucially, to lift operating income from Y4.6bn to Y10bn in that timescale.

The pubic company, listed on the Tokyo Stock Exchange in 2002, intends to do that by “shifting from ‘colour and 3D’ to areas where it can better utilise its digital technology in ‘imaging and healthcare’,” according to Hidenori Fujioka, who was appointed to that post in spring last year with a remit, as outlined by chairman Masahiro Tomioka, to “move us forward with a new medium-term business plan in order to reinvigorate the business.”

Tomioka is concise: “In recent years we have experienced the rise of the Internet of Things (IoT) and Artificial Intelligence (AI). We find ourselves back at the time of our founding - a time when developing sustainable growth through new business creation and a shift of business model was necessary to survive. We are in a new era that demands continuous innovation.”

So, 36 years on since its foundation, as part of Roland Corporation - the electronic musical instrument manufacturer - Roland DG is refocusing. Presently, around 80% of total Roland DG turnover comes from printing systems - in Europe that equates to something like 140m Euro confirms Jerry Davies, CEO Roland DG, EMEA. The other 20% comes from 3D fabrication and dental/healthcare systems.

The thing is, “in terms of unit sales, printing is the least profitable,” Davies says, and as Fujioka puts it: “Markets in developed countries that once fuelled our main growth have reached maturation. Looking at the consolidated sales figures for 2015 (the final year of Roland DG’s previous business plan) we see that sales of wide-format inkjet printers - particularly high cost models - in the signage industry began a downward trend, but, sales of printers in new printing markets, along with milling machines in the dental sector were strong.”

Overall, we can expect printing systems to remain the biggest contributor to Roland DG’s coffers for the immediate future, and to get their fair share of R&D resources. Understand though, that the turnover from systems for ‘signage’, Roland’s main established sales base, is expected to shrink, while what the company defines as ‘digital print’ systems - multiple uses (for which read UV print devices), retail (mainly desktop systems for use in-store/by e-commerce retail business), and textile - is expected to increase in turnover. On the up - and key development focus areas - are also 3D manufacturing/healthcare systems, which Davies confirms are “taking up an increasing amount of R&D spend, though I must stress that printing continues to take the lion’s share.”

“Even though we’re diversifying, we’re a print systems company,” Davies is at pains to point out, while Brett Newman, now back full-time at the UK-based Roland DG operation as chief operating officer, expands upon the group’s ambitions as laid out in the 2016-20 business plan. It clearly states that “our objectives are to commercialise new areas of business by 2018” - so what does that mean exactly?

Well, in broad-brush strokes, it means “taking our core XYZ axis control technology that we use in our printers, cutters and milling machines, and developing that usage, “ explains Davies.

First up, take digital printing for multiple uses, by which Roland means UV printers for high-resolution printing onto a diverse range of materials and where, according to Fujioka, “we are continuing to push the development of applications worldwide for industrial goods.” There’s that word ‘industrial’ again. Newman, concurs with the description of ‘industrial printing’ as being “where a printer is used as part of a production line for making products”. So not Roland’s usual customer then - indeed an opportunity to develop its sales base.

“We’re seeing a major increase in interest/sales of UV machines because of what they allow people to do,” says Newman. “When you say UV printer, people think flatbed machines, but you can also print-and-cut and that provides plenty of opportunity for people to get involved. Roland’s R&D will continue developing UV-LED machines for all sorts of applications and users because there are so many possibilities. For instance, there are UV-LED printers that have expansion ports that mean they fit into industrial production lines.

But actually, a major growth area for Roland are the desktop machines, because they’re an affordable add-on and easy-to-use route to new revenue for people.”

Retailers are a source of custom that Roland DG hopes to woo with its desktop UV products especially. “Historically, our customer-base has been B2B, but the same kit that is used there has scope within the growing B2C market,” says Newman. “There’s a transition with our existing users moving towards B2C and producing bespoke printed offerings, but there are also hypermarkets wanting an on-site print operation to deliver novel items, or for e-commerce businesses operating from home or small units to do so. So there’s scope for us to sell machines to what are new customers for Roland DG.”

Textile is another area highlighted by the company as one of its target growth markets. In 2014 it entered the fray with its first dye-sub transfer printer and now has the Texart RT-640 - aimed at those PSPs moving into soft signage - and the Texart XT-640 for those handling larger volumes of textile print. “We can definitely see scope for the higher volume people to move into digital print,” says Newman, while Fujioka points out that Roland DG will, “going forward, build on-demand fashion solutions with market needs in mind. Also, we aim to purpose technology for new digital processes that meet the needs of the high-variety, small-lot textile industry.”

While Roland expects its real growth to come from areas outside of its ‘traditional’ signage market, there is still attention focussed on the sector, worry not! We’ve just seen the introduction of a new vinyl cutter and Newman indicates that the large-format graphics sector will see “products coming out that are a real advancement.” With Roland being a public company he cannot say more than that, but Davies adds: “We are looking at all sorts of possible developments, and working with partners to look for new solution is new marketplaces too.”

Expect Roland DGs partnerships with software developers to result in the not too distant future in more ‘intelligent’ print systems. Though the company’s R&D is based in Japan, teams do travel worldwide to glean an understanding of what the markets want from regional operations and end customers. The upshot is that the IoT and AI are being leveraged according to Davies and Newman, and that we’ll see that filter through to print systems sooner rather than later.

“We already have products that are smart enough to email a user that they need to order ink etc., but service is the next thing to come - within the next 12-18 months,” says Newman.

Both he and Davies are keen to point out that while Roland is diversifying, print is still its baby, and one it intends to look after well. Roland DG’s Creative Centre and Academy are cases in point.

“It’s not just about technical training, but getting people to understand the business side of digital print possibilities,” says Newman. “It’s about building interest, which will in turn build demand.”

What Roland is doing, is putting itself in a position to service a demand from outside its ‘signage’ grassroots customer base as well as from those within it.