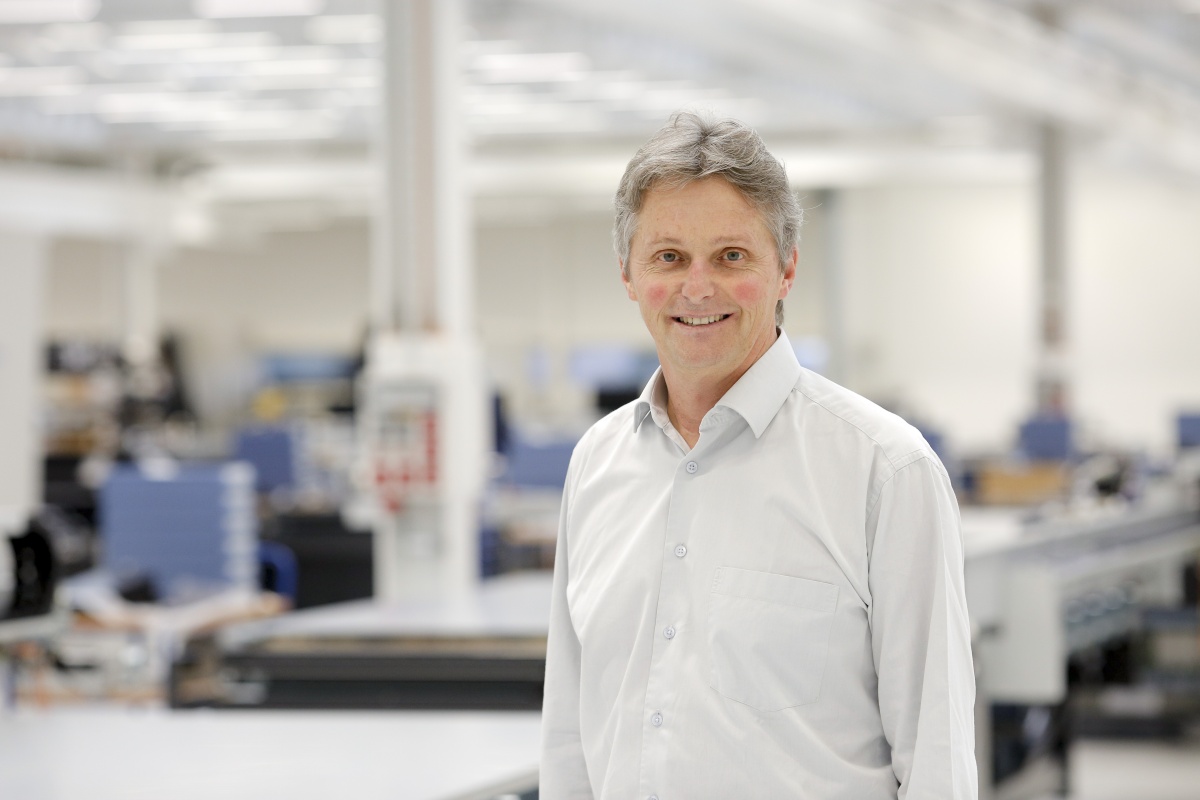 Ten years ago three former Zund men set up swissQprint. Now it’s a key player in the flatbed printer market. So what’s the vision for the future?

Ten years ago three former Zund R&D men - Roland Fetting, Hansjörg Untersander and Reto Eicher - set up swissQprint. Why? Because, as Eicher, its CEO, explains: “By the time Zund decided to discontinue the printer division we had gathered a great deal of experience in developing large-format inkjet printers. We did not want this know-how to be wasted. Instead, we believed in this technology and still had a great deal of ideas. There was a potentially growing market we wanted to be part of.”

The goal was to go from a standing start at the company’s formation in September 2007 to having a finished product ready in time for Drupa 2008. Though an actual working product did not appear at that event the team did meet their self imposed deadline in that they had their first product - the Oryx flatbed printer - all set. According to Eicher “it was Christmas 2007 that the first prototype actually moved mechanically, but there was still a long way to go before we could present a finished product at Drupa 2008. We did not show the machine at the trade show - we did not have the money to be quite frank - but it was shown at a fringe event with our first distribution partner Sihl.”

Now the company, still an independent joint-stock operation headed by the founding three-man executive board, has more than 900 printers installed worldwide. SwissQprint, like most private companies, declines to provide financial figures, but is happy to share the information that its Nyala 2 model was the most sold flatbed in Europe in 2016, accounting for one in six sales in the 130,000-500,000 Euro range (data from InfoSource).

That’s pretty good going, especially as Eicher points out: “Survival was key at first. We were nobody back then. People did like our product but everybody wanted to wait and see. Nevertheless, we did find people who believed in us and we prevailed in spite of the financial crisis at that time. We then surprised the market a number of times by launching products when nobody expected it. Our second printer, Impala, for instance, was launched only two years after Oryx and it broke every speed record back then. Again, two years later, Nyala came. It was larger and faster than everything we had produced so far.

“It has always been our mission to be among the innovators of the industry. And we have kept delivering. The transition to the second printer generation started in 2015 and was completed in the same year. By then we already had 500 machines in the market. We have constantly implemented improvements into the series and we are now looking at the third generation that involves LED technology. Some of the steps were not even promoted as new developments even though they would have been worthy. We are technology driven, that is for sure. We want to push new developments.”

According to Eicher, when it comes to which machine is its best seller “the Nyala model is the clear leader as it offers the greatest range of possibilities. It has been so right from the start and we expect it to stay at the top. It obviously covers the majority of requirements that customers might have. If we look at trends in the mid-range market, we see that there is a demand for large and productive printers that produce high quality and offer a wide range of applications. That includes the possibility to print 3.2 m wide roll stock with a flatbed printer. And even though it is the most expensive model in our range at first sight it has the lowest total cost of ownership. In the end, the investment must pay off and it will do so if the printer is used to a maximum extent. Our customers seem to tap this potential.”

While swissQprint is active in 40 countries, with direct subsidiaries in the US, Japan and Germany and a network of official sales and service partners elsewhere (that being Spandex in the UK), Eicher says central Europe remains its main market, though it is seeing particular growth in Asia. “We are based here and we started here. Generally speaking we try to have a broad distribution base in order to balance opportunities and risks,” he says, pointing out that while the company “intends to strengthen its international presence by offering high-end products and by providing outstanding service in every aspect,” the needs of professional PSPs in Europe is a core focus.

“The graphic market will remain our principal target market. Besides, there is a clear trend for industrial applications. We already have a number of industrial customers as we are flexible enough to cater for special requirements. And we will be ready and happy to go into serial production if a certain solution of whatever nature becomes standard.”

swissQprint’s R+D and production are sited at Kiessern, Switzerland, where it has a workforce of 75 people. “Everything is under one roof. R&D and production are door to door. That makes us extremely efficient and agile in terms of improvements and new development. Besides, as we were able to design our premises the way we needed them,” adds Eicher. “Moving to larger premises in 2015 was a crucial step for us. It secured future growth and made things so much easier and efficient.”

Speaking of efficiencies, what about developments like Rob, the robotic handling system swissQprint introduced at the last Drupa. The product won plaudits for being at the forefront of automated handling, but is it living up to expectation in terms of sales?

“Rob is doing well. Whenever we demonstrate him people are amazed by the flexible utilisation and the perfect integration into the printer’s control system and the workflow,” says Eicher, who admits that: “Nevertheless, it seems that users are not quite ready to introduce automation in their own print shops yet. Maybe, Rob is a bit ahead of time but we had sort of expected that.”

His stance is that robotics are indeed suitable for the large-format graphics market, “provided that a print provider has a sufficient amount of repetitive work.” He argues: “The good thing is that Rob works on a plug-and-play principle. The printer stays as flexible as it is and we believe that is key in the graphics market.”

So that’s indication that swissQprint will continue to develop robotics for this sector as well as flatbed printers? “To us, Rob is a starting point. By presenting this robot we have sent a signal. We will be ready when automation really catches,” enthuses Eicher.