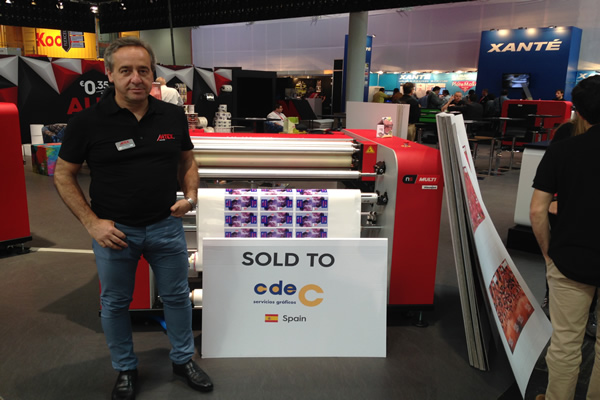 As we reflect on another inkjet dominated Drupa, Richard Stuart-Turner asks ‘what are the implications of industry-wide developments for the large-format print service provider?’

Before Drupa 2016 opened its doors it was largely expected that the show would be another inkjet extravaganza, and that proved to be very much the case. The technology caused a major stir across the board but particularly in relation to industrial print applications and - perhaps more prominently - packaging.

Innovation in inkjet could be seen in technologies ranging from Heidelberg and Fujifilm’s new B1 industrial inkjet press the Primefire 106, which was shown for the first time at Drupa, through to Konica Minolta’s KM-C, a prototype of a new B1 UV inkjet digital press targeted at the commercial print and packaging sectors.

But what did the Düsseldorf show teach us about inkjet’s continued migration into commercial print, and how will this impact large-format print service providers?

Many analysts we spoke to felt that the key area of interest in inkjet for many visitors was the continued evolution of single-pass in commercial print, and the increasing array of applications it can be used for.

Single-pass inkjet printing, which sees the printhead or heads remain stationary while the substrate moves, was certainly a crucial element to a lot of the new equipment on show.

A variety of single-pass inkjet head technologies are currently used by various manufacturers, in presses costing anything between around £70,000 up to the region of £3m. These include Fujifilm Dimatix’s Samba piezo heads, HP’s 841 PageWide XL printhead and Memjet’s 42in printheads, which are used by OEMs including Xerox, Canon, RTI Digital and Xanté in a range of different printers.

In wide-format terms single-pass inkjet is still relatively new, though it has already proven attractive for applications such as posters, POS and exhibition and display work. Of course, a major advantage of the technology is the much higher speeds compared to multi-pass.

Though a lot of existing single-pass inkjet technology has maximum widths of around or just over 1m, Memjet general manager for wide-format Kevin Shimamoto does not see any limitations on width going forwards, meaning the application potential will continue to grow.

“As we develop our next generation of technology where we have different inks, longer life printheads, faster print speeds and better image quality, we’ll be able to go after a variety of OEM partners and target a wider variety of applications,” says Shimamoto.

Single-pass has been of limited use for many wide-format PSPs up to now because of the limitations of the previously dominant dye-based aqueous inks for applications such as outdoor graphics. Much of the newer kit is compatible with UV and pigment-based aqueous inks. Indeed, water-based UV technology, which increases the compatibility of single-pass inkjet with a greater variety of substrates, was behind the majority of Drupa’s innovations in this area.

Both Memjet and Fujifilm told us solvent inks for single-pass inkjet are not in their immediate plans though Memjet, whose OEM partners use aqueous-based dye inks in their wide-format printers, said it envisions getting into different solvent and UV-curable inks at some point.

Shimamoto says Memjet-based kit is already taking market share and prints from older technology. “We can do it faster, cheaper and more efficiently with any run length but also enable new market applications such as wallpaper, trade show signage or certain POS campaigns. We can do those types of applications so much faster, in short runs and with greater customisation.”

One of Memjet’s newest OEM partners, New Solution, showed its new single-pass wide-format packaging printer, the NS Multi, at Drupa. The device, which can print and laminate on a variety of substrates, can accommodate variable widths up to 1.07m and print single-pass at speeds of up to 300mm per second.

As one of the printing industry’s fastest growing sectors, it’s little surprise that packaging was the most talked about application for single-pass technology at the trade show.

As we alluded to in our May issue, wide-format inkjet is set to open a new market in packaging, and it is expected to have become a routine application for the digital wide-format community by 2021.

A Smithers Pira market report published last year, ‘The Future of Digital Print for Packaging to 2020’, said inkjet will become the dominant technology for digital packaging production by 2018. Over the next five years the volume of packaging printed on digital equipment will more than double, generating a market forecast to be worth $19.8bn (£14.9bn) in 2020, according to the report.

The speed and quality that can be achieved with digital inkjet technology is starting to catch up with conventional methods and digital is also attractive for packaging because of the ability to print cost-effective short to medium runs, more flexibility and the advantages of variable data and personalisation options.

Whether you’re doing packaging or not, it is an industry that is growing so quickly that it is hard to ignore, particularly corrugated, which was the specific area of the market that much of the new technology is targeting. Smithers Pira said the corrugated board packaging market will be worth $269bn in 2021, compared to an annual consumption volume of $222bn last year.

“I think everybody should be seriously looking at corrugated,” says EFI senior product manager G. Scott Wood. “Single-pass gets rid of a lot of daily challenges by eliminating things like banding. It has some different challenges but for high colour content version runs it makes a lot of economic sense. Print buyers of major brands are chomping at the bit for the ability to do more versioned work and target demographics, cities or sports teams.”

EFI’s major single-pass inkjet news at Drupa was the launch of its 1.8m-wide Nozomi C18000, a sheetfed digital packaging press targeted at high-speed corrugated board production. The press, which will be commercially available in 2017, can run at speeds of up to 8,100m²/hr and can print on boards up to 1.8m x 3m in size and thicknesses up to triple-wall board.

EFI is also working on a version of the C18000 that uses low odour UV inks for POS and display graphics, which Wood estimates will be available next year. The manufacturer is currently working to ensure that the inks for this iteration of the press will adhere well to non paper-based substrates.

HP has announced its new PageWide C500 Press, which is also targeted at corrugated direct-to-board printing. The company is keeping tight-lipped for now regarding the specifications, but commercial availability is expected in 2018.

HP’s PageWide technology has made big waves in wide-format single-pass inkjet over the past couple of years. The PageWide XL 5000 and XL 8000 devices, which were launched last year, have a print width of 1m and can be used for applications including short-run promotional posters, though many early adopters are repro houses and design studios. This may change as and when the maximum print bar width increases.

Screen subsidiary Inca Digital is also looking at widening single-pass inkjet technology. At Drupa it showed a 1.5m-wide bar, which can be extended up to 3m if required.

Durst got in on the corrugated action with its new water-based UV single-pass press, the Rho 130 SPC, which was running on its Drupa booth. The manufacturer said the printer, which has a maximum printing width of 1.3m and can print at speeds of up to 9,350m²/hr, is suitable for the cost-efficient production of shelving and sales packaging in short and medium-length runs. Commercial availability is expected in spring 2017.

Canon launched its single-pass inkjet device the Océ ColorWave 910 - the successor to the ColorWave 900 - last year. Canon UK business group manager for display graphics Dominic Fahy says the machine, which could be used for work ranging from plan printing and reprographics through to posters and display graphics, received a positive response at Drupa.

But Fahy is keen to remind PSPs to not just look at the headline speeds of single-pass technology but also consider the practical saleable output. “With single-pass its important that PSPs ensure that the machines will do what they want them to do.”

He adds: “What I took away from Drupa is that being able to produce new and innovative applications is something PSPs are keen to look at and understand. They are looking at how they can get the greatest returns from their investments, both per square metre and per hour of labour, and are also interested in solutions that will deliver key applications.”

EFI’s Scott believes many commercial printers not currently offering wide-format services will look to start getting into the high graphics space, as single-pass inkjet technology develops.

“Today there’s such a gap between what you can do on a digital press vs analogue, and a clear division between going to a graphics house or a paper and packaging fulfilment house.

“The graphics guys need to be aware that, even though these early presses are targeted at paper, the paper guys are going to have the capability and may want to start producing graphics on paper-based substrates for POS. But wide-format technology has got so good that we could see it going the other way too.”

Prototyping could offer a first step for wide-format PSPs looking to dip their toes into packaging, says Memjet’s Shimamoto.

“Prototyping is a big area - for the traditional wide-format PSP it’s a matter of getting familiar with different types of packaging substrates and prototyping is the first natural fit, from there I think they can go into limited short runs.”

Fujifilm UK managing director Keith Dalton notes there are other points wide-format PSPs should consider about single-pass inkjet: “With different quality standards, different densities of inks and different inks, in large-format the question is, will single-pass give you the ink density and the quality that’s really required?

“I think it can do, but it depends on how many heads you put down. If you throw down a lot of heads you can get multiple passes in a single pass nowadays. I would argue there’s probably more of a trend towards quality than just productivity in wide-format.”

He adds that to cope with the higher productivity single-pass inkjet offers, PSPs also need to consider the possible extra handling involved: “You need automation to handle it, particularly if you’re dealing with thicker boards, so then you’ve got a big cost infrastructure behind the automation. If you’ve got that then you’re talking about much higher run lengths.”

Looking away from single-pass, and off the beaten track, but interesting nonetheless, was Veika’s new Dimensor S - the first printer to incorporate the manufacturer’s Dimense technology - which digitally prints and embosses simultaneously and is said to allow users to print non-repetitive and unique wallpaper.

Dimensor S, which prints up to 1.6m-wide, can create relief structures of varying depth, which the company says brings genuine 3D effects into digital printing, and add special effects such as gloss or metallic finishing.

Above all though, it was single-pass that showed itself at Drupa to be the next big step in inkjet’s continued migration into commercial print. Though right now the technology may not affect the work of a lot of wide-format PSPs, as speeds get faster, widths and applications increase and costs come down, single-pass inkjet may start to make more sense for the sign and graphics markets. It’s certainly a technology worth keeping a close eye on.