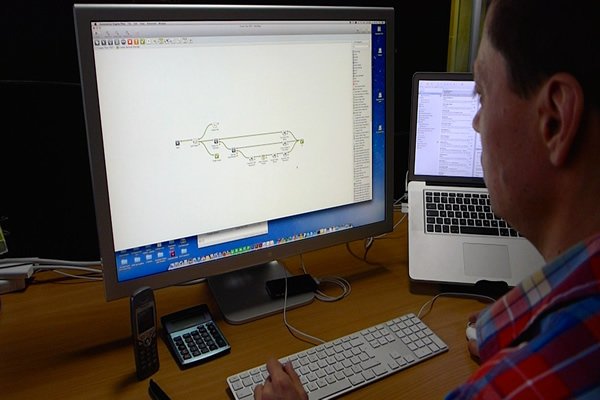 What are the latest developments that can help large-format PSPs streamline their workflow to create a more profitable business? Richard Stuart-Turner investigates.

The themes of automation and streamlining workflow have been cropping up increasingly across the print industry in recent times, particularly with the buzz surrounding Print 4.0 and the intelligent linking of systems and processes. Now, after a relatively slow start, this trend is finally starting to cross over into large-format, with PSPs, printer manufacturers and software vendors thinking it is becoming increasingly essential to ensure connectivity between MIS, Web-to-print platforms, on-board machine software and all the various other applications now prevalent in print operations.

The reason for the shift is obvious - a streamlined workflow enables companies minimise downtime, use their machines more effectively, cut turnaround times and save on costs and waste. Furthermore, the use of closed-loop colour management systems can help businesses to detect early on if colour starts to drift etc.

“To be more efficient with wide-format workflow is also to be consistent with what Rip is used in a business,” points out Fujifilm Europe workflow product group manager John Davies.

“We often find companies running six or seven devices, each with their own Rips, and when not everybody knows how to use the Rip software, it’s hard to provide any cover when you get into holidays or sickness.”

To date, workflow automation has been more closely aligned with conventional printing methods like offset litho, where longer run jobs with less customisation make automation more immediately attractive. Nevertheless, automation in wide-format is climbing up the agenda. EFI Fiery wide-format product marketing manager Kerry Moloney says it has definitely seen wide and superwide-format PSPs taking automation and integration more seriously in the past year. “Although they have high margins now that enable them to not have to streamline quite as much, I think they’ve realised that if they streamline the way they work first then their profits are going to be even better.”

She adds that technological advances have also played a part. “There are now tools, controls and configurations for bigger sheets and all the things you would need for the differences between litho and wide-format are taken into account in the software technology now versus maybe two years ago.”

XML-based Job Description Format (JDF), which supports the connectivity of MIS and Web-to-print platforms to a PSP’s Rip software, has been long tipped as the next big thing for integration. However, in the past few years an increasing range of software and workflows that are easier to integrate across multiple vendors than JDF have also started to emerge.

A lot of the bigger wide-format PSPs have already implemented systems to streamline their workflow, including Cheadle Hulme-based Cestrian. Technical director Nick Shelley says: “Although the cost to get to where we are today has been significant, we now have scalable software. This means if we win a large, complex account tomorrow, we don’t need to invest in an account manager to process the work or studio personnel to pre-flight and rip the files.

“Our plan has always been to grow in terms of sales revenue, but with the scalable software we can utilise the existing personnel we have. We are freeing up the laborious tasks so studio staff and account managers can work on more interesting bespoke jobs, or give our customers the service they need.”

For smaller businesses, however, workflow efficiency might mean something else. Andy Wilson, managing director of Chatham-based PressOn admits: “It’s not an area we’ve looked hugely into. I’m not saying there’s not software out there and there won’t be an opportunity in the future but, because in many ways we apply our materials in a creative fashion, there’s not much in the way of continuity.

“I don’t think my business turns over enough to warrant a £20,000-£30,000 investment in software and additional cost in man hours to get it up and running.”

Perhaps not for everyone then - at least not yet - but for those interested in getting started there have been a number of new products and platforms launched over the past few months.

At Drupa, Fujifilm launched XMF Controller and XMF Ensemble, additions to the manufacturer’s workflow portfolio that it says will help deliver automation and efficiency benefits for PSPs in the commercial and sign and display markets.

XMF Controller sits in front of Fujifilm’s XMF Workflow and allows jobs to be created directly from an MIS system, removing the need for a PSP’s pre-press department to be involved in each stage of a job.

Phoenix, by Tilia Labs, part of the XMF Ensemble portfolio, is an imposition and planning system for wide-format and packaging PSPs that features ‘step and repeat’ functionality for irregular shaped artwork and planning tools that can automatically set up a wide range of jobs to optimise cost, speed of production and the minimisation of waste.

Fujifilm’s Davies says: “Before we brought in Phoenix it was a blank canvas of somebody dragging in all these individual jobs. This has taken away that step and uses some algorithms to make the calculations to work out what is the best way to maximise the output and work out the priority in laying out the jobs to be printed.”

Davies adds that XMF Ensemble includes tools to enable the ganging of jobs - a key workflow requirements for many wide-format PSPs.

HP’s PrintOS is another significant recent workflow development. The cloud-based print production operating system, which was also launched at Drupa, features a set of Web and mobile apps that the company says helps PSPs to simplify and automate their production and get more out of their HP presses and printers.

The software, which is designed for use with HP’s Indigo, PageWide Web Press, Scitex and Latex machinery, is said to streamline workflow by allowing customers to monitor their print status remotely and track and improve their production performance over time.

EFI also announced a range of new workflow products at Drupa. The firm signed a letter of intent alongside Esko to bring a combined workflow solution to market that will enable PSPs to produce packaging with a single integrated workflow. The collaboration will connect EFI Fiery digital front ends, Esko workflows and EFI ERP/MIS solutions.

EFI Fiery wide-format senior product marketing manger Elli Cloots adds the company is focusing more on feeding back information into an MIS so PSPs can more easily monitor which jobs and clients make them the most and least money, and how effectively their machines are being used.

“We see it as important to collect that intelligence and present it in a way that you don’t have thousands of numbers but you instead get charts that allow you to come to conclusions,” says Cloots.

Like EFI and Esko, many vendors and manufacturers currently bringing new workflow products to the market are doing so in collaboration with partners, or are at least making sure their new products can be integrated with a range of solutions from other developers.

SA International (SAi) develops platforms including Flexi Rip software, which is said to integrate with wide-format printers and cutters of all types. SAi technical marketing manager Jurgen Verhulst says: “We’re working on a few things for the future to become platform independent; if you want to evolve in this market I think that’s the way to go. Partnerships are helpful and are a precursor to what should happen to have a better integration to the whole workflow.”

“Because in wide-format there are a lot of variations in terms of what people are printing, it does tend to mean buying lots of products from different suppliers. That makes it challenging when you’re trying to provide one workflow to devices from lots of different suppliers,” says Davies.

“That’s why we work closely with Caldera’s Rips for wide-format devices, because they support most devices out in the market today. This gives us the ability to provide consistency across the workflow for both our own supplied devices and those from other suppliers as well.”

Another key Drupa launch was Agfa’s Apogee 10. The company says the latest version of its workflow software adds extra features, significant quality improvements and performance enhancements to equip PSPs with a comprehensive solution to control all production output from one user interface. The software links directly to wide-format kit including the Jeti Tauro, Jeti Mira and the Anapurna family as well as a range of non-Agfa wide-format engines.

Enfocus released update 1 for its Switch 13 software earlier this year. Besides Onyx Thrive, Switch integrates with one or more solutions from partners including HP, EFI and Caldera and is therefore a popular choice among PSPs looking to streamline their workflow.

Alongside Switch 13 update 1, Enfocus launched its new Appstore, which enables Switch users, developers and resellers to create and share apps to boost the capabilities of the Switch workflow. The apps, which are added to the store daily, can be used to help solve business problems.

Enfocus Switch product manager Toon Van Rossum says: “You can integrate Switch with all the software you already have and even make it futureproof if you expand your workflow later on. It’s easy to start very small; you can buy the core Switch product and then buy additional modules later and this can grow as you add more steps and integration.

“We’re now going to focus more on the openness of Switch and make it easier to integrate on different levels and add new layers and possibilities.”

For many PSPs, though, the sheer scale of the integration task itself is the biggest concern when first considering streamlining their workflow.

“Some customers think it’s going to be extremely complicated and lengthy to implement,” says EFI’s Moloney. “To a degree they have a point, but if tackled correctly with the right expectations and they give the time, information and resources to it then it’s not as bad as it might initially seem to a customer to take that leap.”

PSPs of all sizes - but in particular larger firms - then, should be starting to at least look at streamlining their workflow if they are not already doing so, agree most industry experts.

“Companies should be looking into it so that they are ready,” says SAi’s Verhulst. “Business is growing again in Europe but margins will always be under pressure, so if you’re a business owner you always have to look at how you can improve and drive your business.”

Fujifilm’s Davies concludes: “With a bit of education we can at least get our customers asking themselves the right questions when they make investments and make them aware that - from what we’ve seen - this is going to become more important in the future and they should be spending some time looking at this.”