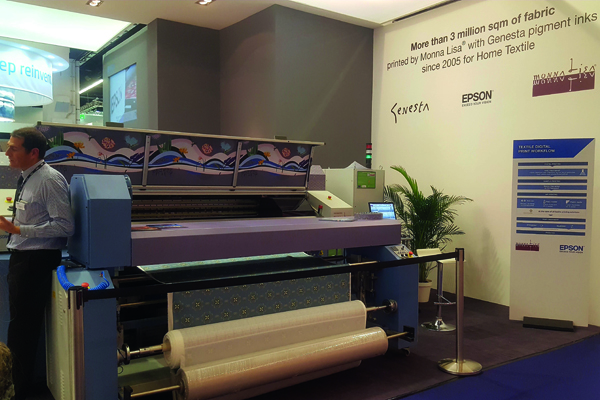 What are the latest digital textile printer developments, and could any of this kit be right for your business? Richard Stuart-Turner reports.

As one of the fastest growing areas of the large-format sector, and one that presents some of the biggest opportunities for the future, the buzz surrounding digital textile printing is unlikely to fade any time soon.

The latest data from Smithers Pira values the current digital textile printing global market at 1.17bn Euro and forecasts an annual average growth of 12.3% up to 2021, taking the market value up to 2.42bn Euro within five years. And yet textiles printed using digital processes only made up around 2.8% of overall volume in 2016, meaning a huge chunk of market share is still up for grabs.

Fortunately, digital is already well placed to eat further into this market and the quality, speed and variety of applications possible with digital textile printers are all still improving.

“Over the past two to three years people have started to pick up on textile and its advantages; not just in shipping but the quality and the colours are now no different to printing onto a rigid media or a banner or vinyl,” says MTEX Technologies business support manager Rick Kwiecien.

“Everyone in Europe who is into textile is probably a year or two ahead of us because they’re already heavily into it and are now moving to the next stage. We’re still dipping our toes into the water in the UK. There are flag companies here using it and people doing things for big stores but we’re still very much sign and display with textiles here. Home furnishings, clothing and bespoke items is where the big growth is going to be.”

Thomas Valjak, HP’s large-format business EMEA director, says there are numerous benefits to textiles. “Some customers like the look and feel of textiles, for example in retail environments, and some prefer its ease of use, handling and resistance to folds.”

Furthermore, textile printers can help to open the door to the burgeoning personalised print market. “For us, the different things you can do with sublimation and the advances we’ve had in polyesters have made it so accessible and cheap to produce a personalised product rather than runs of thousands of metres,” says Epson Europe product manager for production LFP Neil Greenhalgh. “You can now do a run of one, and people don’t mind paying a bit more for individual items.”

A good place for many PSPs with textile printing aspirations to start was the recent Heimtextil 2017 show. The international textile and garment manufacturing trade fair, which was held in Frankfurt in January, attracted around 70,000 visitors and 2,963 exhibitors. Among those showing their wares at the event this year were manufacturers including Epson, Mimaki, EFI, Mutoh, Durst and HP.

Recent advances in inks is one of the main reasons that digital textile printers are becoming increasingly used to print home textiles, says IMI Europe managing director Tim Phillips: “The introduction of the first vat dye inks for inkjet printing is a big thing in the textile field because it means that a lot of home textiles, cushions and fabric covers that are currently printed conventionally have become a new area of digital adoption.”

A number of manufacturers either launched new machines for the textile printing market or showed its latest offerings at Heimtextil.

SPGPrints introduced two new printers aimed at the interior decor and wallcovering markets. The 3.2m-wide Javelin is most suited to decorative textile products such as bed linens, curtains and upholstery while the Pike decor printer is aimed at home decor applications.

Giovanni Pizzamiglio, head of Pro-Graphics sales at Epson Europe, says: “The acquisition allows our engineers to help Robustelli’s engineers to achieve the maximum knowledge in order to develop a new market in textiles.

“The Monna Lisa Evo Tre has three models, 1.8m, 2.2m and 3.2m, uses the latest PrecisionCore heads and is compatible with reactive and acid inks and soon with direct disperse and pigment inks too.”

The 385m2/hr Tiger-1800B is targeted at PSPs looking to produce high volumes of digitally printed textiles and is most suited to the fashion industry, according to Mimaki.

“We saw a broad range of visitors at Heimtextil - buyers, designers and those involved with production, all of who are showing increasing interest in digital print technology because of the opportunities it opens up,” says Stephen Woodall, national sales manager for textile and apparel at Mimaki distributor Hybrid Services.

“This machine takes Mimaki’s textile heritage and expertise and moves it into a different field. The customers we spoke with were frequently discussing the evolution of their processes and how they’re designing with digital output in mind.

“Short runs are getting longer, thanks to printers like the Tiger-1800B, and this is helping to locate manufacturing much closer to its end market - with all the benefits that brings.”

Also active at the industrial end of the market is EFI, which acquired textile manufacturers Reggiani Macchine and Matan two years ago and has since brought numerous new textile machines to the market. Among these are the 1.8m and 3.2m-wide Vutek FabriVu high-resolution fabric printers, which were launched at Fespa Digital last year.

At the same show Durst launched its Rhotex 500, a 5m-wide dye-sub printer suitable for soft signage and fabrics.

But, understandably, not everybody wants or needs an industrial machine. Catering to those looking to produce slightly lower volumes, Mutoh used Heimtextil as a launchpad for its new 1.9m-wide ValueJet 1948WX, a dye-sub transfer printer suitable for home textile and interior decor printing that has a top speed of 117m2/hr.

Meanwhile, along with the Tiger-1800B, Mimaki also showed its recently launched belt-driven Tx300P-1800B at Heimtextil. This 1.8m-wide device can print at speeds of up to 50m2/hr.

“This machine is especially suitable for fabrics that contain an element of stretch or are particularly lightweight as, thanks to its advanced fabric handling capabilities, it can deliver a quality print to more demanding materials,” says Woodall. “Its belt-washing feature also removes excess ink that has marked-off on the belt when printing open weave or lightweight fabrics.”

MTEX also offers a range of printers targeted at the lower volume end of the digital textile market. Kwiecien says MTEX’s entry-level Blue, which is available for around £50,000, will give PSPs a foot on the ladder but he promises MTEX has more to come in this space in the next few months.

“We’re going to enter the fray with a bigger, better, faster option. You can expect a big step for us going forward at Fespa in Hamburg in May. We’re looking to keep up with the demands of the textile industry, where everyone wants to go faster, but keeping the quality.”

HP has seen success in the textile printing area with its Latex family of printers. At Drupa last year the company launched the 3.25m-wide Latex 1500, an entry-level version of its existing Latex 3500. At Heimtextil it was running both a Latex 3500 and a Latex 365 on its stand.

With their ability to print onto textiles as well as more traditional medias like PVC banners and self-adhesive vinyls, Latex machines have proven to be a popular starting point for those wanting to try their hand at textile printing for the first time.

“Latex technology is really an enabler for PSPs and interior designers moving from static repeat patterns and analogue technologies into custom designs and almost one-to-one production,” says Valjak. “People love to have their own unique designs at home, in the office, in hotels, in shops and in restaurants.”

He adds: “Printing on textiles is not only related to the hardware but also very much related to the ink and to the media or the substrate being used. Therefore, we’ve spent a lot of time working with a couple of substrate manufacturers to come out with new products that take the benefits of Latex into new substrates and media products that should come out in the coming months.”

For PSPs looking to make their first foray into textile printing at a low-cost and low-risk entry-level, investing in a direct-to-garment (DTG) printer could be one way to go. Devices of this kind are offered by manufacturers including Epson, Kornit and Mutoh and can be used for applications such as short-run T-shirt printing.

Greenhalgh says: “Our SureColor SC-F2000 is aimed at being a T-shirt printer but we used it to print aprons and cushions at Heimtextil and people also see it as something that can be used for sampling, just to try out some designs or to see how things work.

“People think of textile as just fabric to a certain extent but we also showed cutlery and plates that have been sublimated onto so the promotional goods side is starting to increase too. We’re trying to show people the diversity and that it isn’t an expense. You can either become a start-up business, or if you’ve already got a business you can invest into a sublimation machine or DTG machine just to give you that additional offering.”

Some screen printing companies are also making the switch to digital by investing in more industrial DTG printers, such as Kornit’s Storm Hexa and Storm 1000, both of which were launched at last year’s Fespa Digital. Kornit says these machines are also aimed at medium-sized PSPs looking for higher productivity printing onto garments.

Textile printing is not going to be right for everyone of course, but the opportunity in this sector is clear to see.

“Textile is going to be enormous, what we’re touching at the moment in the UK is just the tip of the iceberg,” says Kwiecien. But he notes that there is also a learning curve for anybody getting into textile printing for the first time, with so many new and different medias and substrates to get used to handling.

In terms of what’s coming next, most of the textile printer manufacturers we spoke to are keeping their cards close to their chests for the moment but many have assured us that their latest developments in this space will be revealed in the next few months.

With Fespa set to open its doors in Hamburg in a matter of weeks, it will be interesting to see exactly what’s next for digital textile printing and how big a trend it will be at the show. Going on what we have been told so far, we can almost certainly be assured of a plethora of new launches bringing increased speeds, higher quality and even more convincing arguments as to why this area is one to keep a very close eye on.