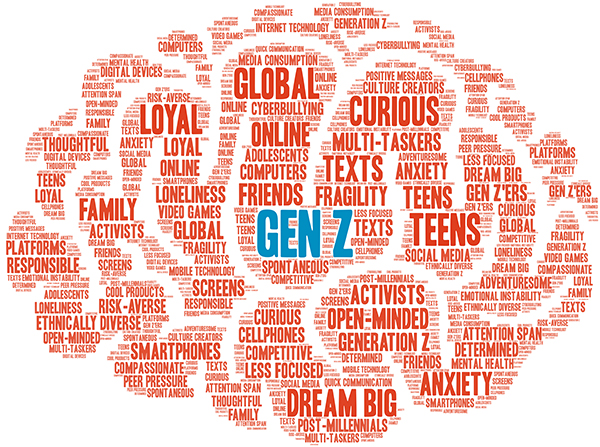 Dreaming about reaching Gen Z - as staff or customers? Then personalisation needs to take on a whole new meaning as Walter Hale explains.

Eight seconds. That is the estimated attention span of a member of Gen Z. It only takes a quick Google to unearth that statistic. It makes for a great headline (especially if you are one of those who are convinced that the world is going to hell in a hand-basket) but there is, as one British government study concluded, not much evidence to support it.

As the first digitally native demographic, Gen Z have become extremely adept at ruthlessly filtering out messages that are irrelevant to them - whether they be traditional adverts, online news, blogs, social media posts, emails or YouTube videos. In other words, they don’t want to be sold to, even though selling to them is vital for the many businesses hoping to engage them as customers, or as employees.

Who are Gen Z exactly? In one respect, that’s easy to answer: the consensus is that this demographic group was born between 1997 and 2010. Yet one of the world’s leading marketing agencies refers to them as “identity shifters”.  This cohort has acquired an impressive variety of nicknames. In the UK, they are ‘Generation Sensible’. In America, they are ‘iGen’ or ‘Zoomers’. In Russia, they are ‘Centennials’. In India, they are ‘Digizens’. In Japan, they are the ‘satori generation’ who live for the moment. In many other countries they are wrongly lumped together with Millennials as if they are merely younger identikit versions of that generation.

The uncertain state of the world at the moment makes Gen Z even harder to read. Most of the milestone life events that were predictable for Gen X, Baby Boomers and, to a considerable extent, Millennials, have been comprehensively disrupted for Gen Z. Where they live, how they make friends, if they enter higher education, where, whether and how they work - none of these issues can be taken for granted.

Organisations cannot afford to ignore Gen Z. Estimated to account for four out of ten of the world’s consumers, they have a global buying power of US$150bn and influence $600bn of consumer spend. Yet Covid-19 and related uncertainties have left more than half of them worried about whether they can pay the bills. Gen Z shares other traits across the globe: their sense of vulnerability and worry about their lack of control; their experience (and expectations) as digital natives, their fascination with new technology, their quest for empathy (and authenticity) and their alarm about climate change.

Gen Z has turned to social media to express their individualism, to create - and share - content that reflects their exact values and passions and make their voice heard in protests such as #BlackLivesMatter and #MeToo. They have been described as ‘mainstream but exiled’ because they are less focused on fashion, music and entertainment trends than on family, friends, work and their mental and physical wellbeing. They want to be empathised with - and empathy does not necessarily mean the equivalent of a consolatory ‘there there’ pat on the head - it could equally mean making their lives easier (and more affordable) by offering such services as meal delivery, ride hailing and music streaming.

It’s hard to decide whether Gen Z’s present mindset is a short-term reaction to the present extreme circumstances or a long-term shift in behaviour. As Mark Twain observed, history may not repeat itself but it does often rhyme. The events shaping Gen Z’s worldview - war, epidemic, recession - are not dissimilar to those experienced by their great-grandparents in the 1920s and 1930s. A century ago, the most potent expression of personal freedom was buying a first car. For Gen Z, it’s probably owning a first smartphone. The way individuals express their personal identity has changed - their need to do so remains the same.

Whether you want to hire them or sell to them, the key to forging a strong bond with Gen Z is to convince them they are being treated as individuals, not ‘AN Other’ customer or employee. You also need to recognise that they regard their main job, according to a survey by music streaming service Spotify, as “rebuilding the world from the ground up”. This attitude is reflected in their distrust of large institutions (be they government, business, political and religious organisations) and the desire, shared by nine out of ten Gen Zs, to run their own business.

This ‘DIY mentality’ - the sense that if the world is going to change it is up to them to organise it - certainly differs from the egocentricity of Millennials, who were effectively brought up to believe that the world revolved around them. In short, Gen Z’s motto is not that dissimilar to the French writer Andre Gide’s maxim: “Please do not understand me too quickly.” But for many a business it’s imperative that the process begins with some urgency.