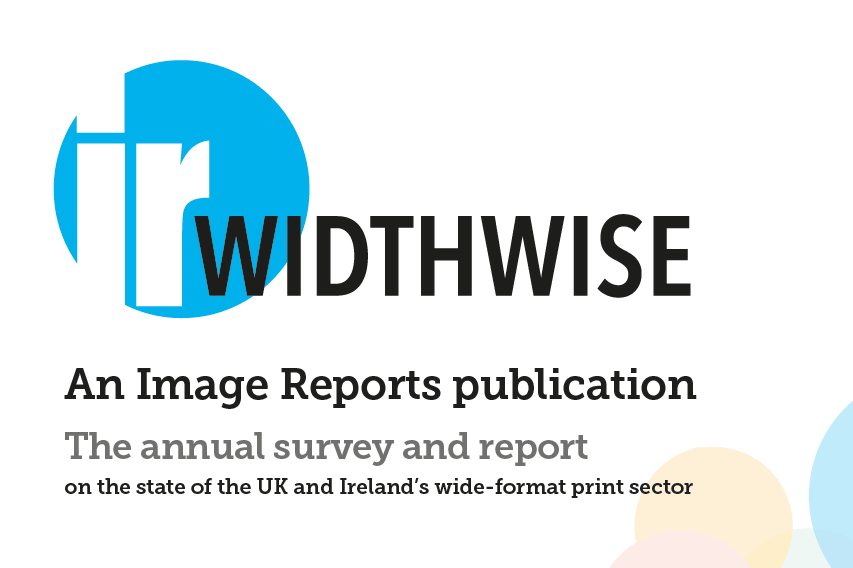 The 2018 Widthwise report on the state of the UK/Ireland’s wide-format print sector will be published alongside the next issue of image reports. But we thought you’d like a heads-up on the key findings ahead of the key trade shows, where so many investment decisions will be made. Or will they?

There’s nothing like a trade show to focus the mind on investment. This year the decision as to which new largeformat printer to buy has already been made by many of you - and the answer is ‘none’. According to data from the 151 large-format orientated print companies that in January/February responded to our annual Widthwise poll of the UK/Ireland’s large-format PSPs, almost half - 47.02% - said they did not expect to buy a new digital wide-format printer in the next two years (37.09% did). That’s the first time in the survey’s 11 year history that we’ve seen that balance. Last year the aye’s and nay’s were equally weighted.

Then there was the Brexit question and what impact PSPs expect it to have on their own business. As you might expect, the vast majority (68.87%) said they are unsure. 20.53% expect it to be harmful, while 10.60% think it will be beneficial. Though the impact of Brexit was listed as a concern for business in 2018 and beyond by 39.07% of those polled, it is the price of supplies that worries most (54.30%) people.

In terms of priorities for the current year respondents were asked to rank a number of options. You guessed it - top priority for most (41.61%) is growing turnover, while 16.78% said improving margins is priority number one (33.64% and 20% respectively in the 2017 poll). Improving return on capital employed is only top for 2.03% and even finding new customers is only top for 12.08%, entering new markets 6.04%... you get the picture.

And how is turnover going to be increased? Well by offering creative design services it appears. Almost two-thirds (60.26%) of polled PSPs said they expect to add this service to their offering within the next year - even more that said the same thing in 2017 (48.97%).

Asked where they would likely invest for their wide-format business over the next two years - beyond large-format printers - design software topped the board (15.23%), significantly ahead of that hot potato, workflow software (8.61%). Other software (MIS, W2P etc.) and finishing hardware garnered little attention.

Overall, 65.56% said they expect to spend less than £20,000 in wide-format technology over the next two years. Where money is being spent, the largest proportion (22.5%) said it would be to increase capacity.

Asked whether they have invested in Industry 4.0 technology, practically no-one (96.69%) said they yet had. What’s more 74.66% of those said they had no plans to this year.