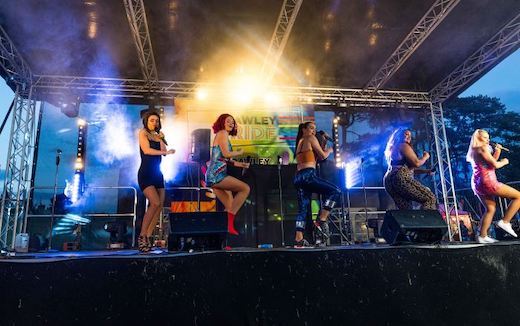 Fastsigns Crawley has announced that it will be an official partner of Crawley Pride 2022.

The move follows an informal partnership that started in 2019 when the franchise offered its services to support Crawley Pride’s 2020 debut event. Although the planned parade was cancelled due to ongoing Covid restrictions, Fastsigns Crawley provided banners, stage backdrops, wayfinding materials and selfie backdrops for a two-day festival at Goffs Park in August 2021.

This year’s Crawley Pride event will take place 20-21 August and incorporate a debut parade march alongside a two-day festival with fairground rides, community stalls and live music. As well as supplying stage backdrops, directional signs, entrance arches and flags, the Fastsigns has committed to sharing office space with the organisers of the town’s Pride, enabling them to store materials and hold ad hoc meetings.

Commenting on the partnership, Melanie Martinez, director of Fastsigns Crawley, said: “We’re thrilled to have this opportunity to support the local LGBTQU+ community’s efforts in bringing Pride to our town in such a significant and important way. From our very first meeting with the Crawley Pride team, we have felt a huge synergy with their passion and ambition for the event and are humbled to be able to further the cause and contribute to its success in any way possible.”