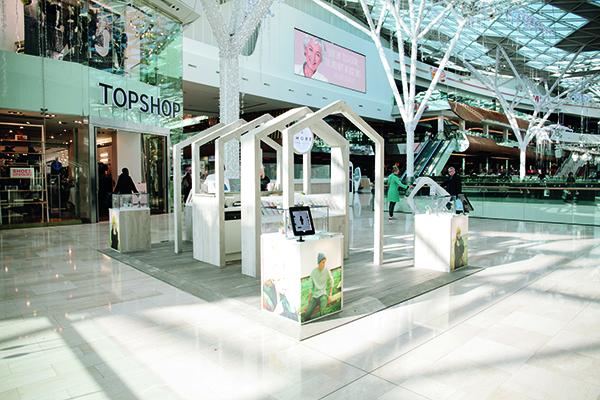 SMP hopes to get its capabilities in front of a bigger potential customer base by sponsoring the Champagne Bar and Big Party at the Retail Design Expo next month. Sarah Davis, head of marketing, explains the thinking behind the group’s first foray into such territory.

Forget having an exhibition stand. SMP thinks it can get much more from trade show participation by taking the sponsorship route, especially when that sponsorship allows it to show off its wide capability to two key customer groups at the same time. In taking on the Champagne Bar and Big Party at the upcoming Retail Design Expo (Olympia in London, 8 - 9 May) it aims to get its possibilities in front those in the retail and exhibition arenas in a way that is somewhat novel for PSPs, and new to SMP itself.

“SMP has always offered more than is generally perceived, largely because it does a lot of bread and butter work. But it does so much more, and Breed Creative (its in-house arm that develops creative solutions - print, digital, social and live - for retailers and brands) together with monthly innovation forums means we are constantly experimenting and coming up with new solutions. The group has rebranded to reflect this, and now the time has come to overhaul our marketing and really consider how we communicate with existing customers and prospects,” says Sarah Davis, who joined the group south London-based group as head of marketing last September.

She acknowledges that she was brought on board to bring a ”fresh pair of eyes” to SMP, though she herself has worked in large-format for ten years, including stints at Service Graphics and McKenzie Clark. “During that time I’ve come to understand what works in this business, and that’s usually by creating a buzz and doing something different,” she says.

At Retail Design Expo SMP certainly intends to do that. Davis, sales director Nick Stagg and new business director Dan Jarvis head up the project, but plenty of others from across the group will be involved in what is a rather ambitious plan. The group could have gone the easy route and, in effect, put some money behind the bar and let the show organiser handle the design and build part of the project etc. But handling all that in-house was a big part of the attraction. “We want to tell our story, and by creating the bar area and taking charge of how it looks and feels is showcasing what we actually do,” enthuses Davis. “It’s our chance to show off to visitors and say ‘we did it all’, so come and see what we can do for you.”

The Champagne Bar, which is open for the duration of the event, takes up 100m2 and is the show’s main networking area. The Big Party - a two to three hour mingle for exhibitors and visitors - will take place in that space too.

“SMP believes there’s real growth in exhibitions and Nick (Stagg) started talking to the Retail Design Expo people last year but didn’t do anything at the last show. This time around we made enquiries and felt the bar and party sponsorship would be a great opportunity. But we didn’t want to back a business style lounge - we wanted to create an experience and give it some pizzazz - create an area that will really get those coming to network talking to each other about the possibilities they can see around them as well as to us!

“To create that we’re taking aspects from previous jobs undertaken by SMP and using them within an ‘industrial antique’ themed bar. The whole area will be subtly split into four to show off our skill in cardboard engineering, pop-up shops, tension fabrics/lightboxes and visual merchandising. So for instance, we thought we could use the arches idea that we created for a pop-up shop area for Shore in Westfield shopping centre. And of course we’ll have SMP people available to talk to people about how we put together various aspects and talk about what we can do etc. - but all very low key.”

The company did however start ramping up interest among visitors weeks out from the event. The SMP website landing page for instance offered a free glass of champagne to those registering with it online. And it flagged up a prize draw that will take place at the show too. So what does SMP expect to get back in return?

“We haven’t got a set of figures we want to come back with,” says Davis, “but we will be building our marketing database as well as networking with new and prospective clients. The intention is to showcase SMP and to break the mould in terms of how PSPs come across to customers.”

Davis says there are other similar ideas in the pipeline, all part of her plan to “push ideas out to clients before they even know what they want”.

It’s all part of a marketing overhaul of SMP, which recognises that “it’s tricky explaining to an exhibitions team how something you’ve done in retail could apply to them. It absolutely could, but they won’t necessarily look at a case study and realise that if they immediately turn off because they think the job is not relevant. We have to find clever ways of catching their imagination.”