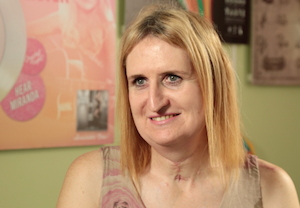 Novalia’s mission is “to bring print to life” by integrating conductive inks and electronics technology to make it interactive.

I went to meet with its founder, Dr Kate Stone, to find out how that mission is going, and what part the large-format inkjet print sector can play in that.
By Lesley Simpson

Firstly Kate, it’s good to see you back at work after that horrific deer accident at the end of last year, which so nearly cost you your life. That must have had an impact on your focus?

I guess I’m more focussed. What’s been great has been coming back to work and seeing all the amazing things my colleagues have done. Some of our best work happened while I was lying in a coma!

Armed with a degree in electronics and PhD in Physics, you formed Novalia 10 years ago in the belief that any printed item can become interactive. For those that don’t know the company, can you expand upon that vision?

I started with a fascination of what print can do as a manufacturing process because I saw incredible capability. As a physicist my interest has been transistors and how they work, and how we make circuits. What I saw in print - and converting - were similar processes, just bigger and faster. Seeing how crisp packets are made, with aluminium deposited on 3m wide webs at something like 60km/hr just blew me away. Print is pretty much the oldest form of manufacturing, the most pervasive form of manufacturing, and is everywhere. And print manufacturing is taking place in almost every city. So I just started on a journey to discover what print could do, and after a few years I turned my garage into a clean room and started flexo printing because I wanted to be an explorer in the land where print meets electronics. I got Government funding and did that for two or three years, and got to the point where I had a vision of how we could make print interactive using everyday print processes, and add some value to that process via conductive inks and electronics circuitry.

You use ‘conventional’ presses – is there scope for using this conductive ink/electronics technology with digital inkjet print?

Printing conductive inks with digital technology is completely possible and people do that, and have been for a long while. But it’s more challenging. So what we are trying to do is simplify things. It turns out that making things simple is incredibly ifficult and it’s taken me ten years to get to this point. We try to use, as much as possible, what’s already available but it is difficult to combine existing things to make something entirely new. So, we know we can go down the digital route, but we don’t yet. For example, even with offset litho, we can print conductive inks but it’s more challenging than with flexo and screen. So we tend to use screen for low volume, big products - the largest we do at the moment is 1 x 1.5m – and a 12in-wide web flexo process where need speed and length.

What relationship, if any, do you currently have with large- format inkjet print companies? What is the scope for development there?

We’re not about technology for the sake of technology, or developing a product for the sake of developing a product. We’re about creating an experience for the end user, whether that’s the people in the street, or in the store, home, workplace... and/or for the people who want to create that – the brand or whatever it is – to get some value from that experience. If a digital print company makes products for a market where they can see the value of adding this interactivity to print, then those are the sort of people we want to work with. I suppose it’s about the mindset of the printer; it’s for those who say we’re not a printer, we just happen to print, but what we’re about is creating amazing products that capture people’s attention.

There are different ways we can work with people. We screenprint our circuits, but that could be laminated behind a digital print. The print company doesn’t need to have screenprinting capability, we can provide that.

You have become a kind of ‘ambassador’ for integrated print, speaking at many events etc. I saw that one of your Ted Talks has had over 600,000 views. And you have had some well exposed successes of late – I’m thinking of the tour promotion poster for US country music singer Miranda Lambert. Is the interactive print message making a real impact yet?

Well we’re getting a lot of enquiries from people, which is great, and we’re starting to see more projects go out. At the beginning of the year there was the Becks ad with a music player, there’s something we did for Schwartz which connects the poster to a phone, and then we did a piece for Hong Kong station that is actually a musical experience – there are pictures of big eggs with musical instruments in them and you can play a guitar for instance via a picture of the strings on the poster. The eggs are meant to represent the rebirth of music, which is quite cool really. To the iPad generation, print is a kind of broken touchscreen - we’ve all heard of two-year olds who try to zoom in on a printed page. But as content moves from the physical to the digital world, a lot of the carcasses of those places that used to house that content have been declared dead – books, the high street... - but we're about making things physical again, yet with some of the digital abilities.

The digital world is about data, connectivity and touch, and those are three things that we can put into paper. We can print capacitive touch and have paper act like an iPhone in terms of creating output. We can make Bluetooth posters that connect to a phone, so you touch the poster and trigger content. The posters can connect to the internet, either through your phone, or it can collect data on the posters with an SD card so that information can be accessed afterwards so you know what’s has been touched. So print isn’t dead, it’s just evolving, and so it’s about the rebirth of that medium. In Hong Kong the egg posters are about the rebirth of music but for us they’re about the rebirth of print.

I don’t think print is dead. What’s going to die is the computer in the form that it’s in – a box on your desk. I believe the future will look more like the past than the present. In the future, everyday things around us will be connected to the internet or be interactive, but in a very, very subtle way. A book will look like a regular book, a poster will look like a regular poster, but access to the internet or the ability to unlock content will be just a finger touch away. The apability is there if you want it, and if you don’t want it you don’t activate it. That’s what the world will look like – not flashing lights and screens everywhere – but kind of like a futuristic Harry Potter type world that’s full of magic but looks old fashioned.

You have a diverse team of about 10, which you have said in the past is “That spread needed to do the ‘magic’ bit of bringing things together – the integration”. Do you think this is a stumbling block to integrated print becoming more widely used?

No, because our job is taking something that’s very difficult and making it very easy – so very adoptable, very deployable. Everything we do is designed for manufacturing and to unlock experiences. So we have a diverse team here because we need to know about print, software, electronics, graphic design and product design. And we need to know how to pull all that together in a platform other people can easily use. We don’t want to be print manufacturers, we want to work with them.

What do you see as now being the keys issues when it comes to the future of integrated print technology such as that offered by Novalia?

I don’t believe there are technology or production hurdles. I think there are just commercial hurdles and conceptual hurdles. The biggest question to answer now is ‘why?’ – why make something interactive? - why should something do something when I touch it? – why do I want a piece of paper connected to the internet? And we answer these questions by making things, giving people exposure to them and letting them play with them. The reaction on peoples’ faces when they do is priceless. You can see them thinking, what’s happening, what does this do? I’ve learned in my meetings that the most effective thing I can do then is to say absolutely nothing and embrace the awkward silence, and then people start thinking and asking can you do such and such? What's important is to create some space to let that happen.

An edited version of this interview can be seen as a video clip here.

You can see examples of Novalia’s interactive jobs so far at http://www.novalia.co.uk/our-work/