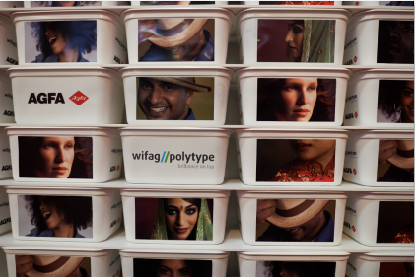 Nessan Cleary looks at how new inks developed for wide-format printers highlight the printer vendors’ growing interest in industrial printing and what that means for you.

It’s easy to talk about new printers and to analyse their performance and associated cost. But by and large it's the consumables - the ink and the media - that can determine new applications or potential cost savings. Most wide-format vendors are working on new inks - this is mainly because they are looking to develop new markets in industrial printing. But, don’t lose faith – this can also benefit the graphic arts market as these newer inks are designed to work with a broader range of materials without needing to use primers. It means that existing wide-format PSPs are in a good position to reach out to new markets, and or provide new applications to existing display graphics customers etc.

Naturally, the bigger ink companies are at the forefront of developments. Thus Fujifilm, through its Speciality Ink Systems division (which was previously Sericol) has announced several new inks this year, including a UV ink, Uvijet KV, that can be thermoformed. 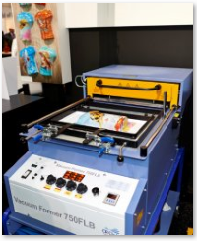 Mike Battersby, marketing manager for large-format, says: “We would like to get more involved with industrial applications and the first move is the thermoforming inks. It uses an existing platform but with a new type of ink technology.” These inks will work with substrates such as polystyrene and PETG, both of which mould easily into new shapes when hot. The ink can stretch by up to 400% when heated, returning to a ‘normal’ state when cool.

At Fespa Digital in May Fujifilm showed off dashboards printed by one of its customers for Minis as an example, but there are plenty of other potential applications. For now these inks are designed for the Acuity printers, with Canon also assessing them for use with its Arizona range. Tudor Morgan, European group marketing manager for Fujifilm SIS, says they could also be developed for the Onset range.

Fujifilm has already developed new inksets for the Onset that extend the materials the printers can handle to open up more packaging applications. Uvijet OH has been formulated for use with Polyethylene and Polypropylene materials that are becoming more popular due to their recyclability. Uvijet OL is a new low odour corrugated ink which satisfies the DiN EN 1230-1 standard aimed at display and secondary packaging, with the residual odour for OL mimicking that of water-based flexo inks.

Agfa showed off a number of new UV-curable inks,both at the InPrint show earlier this year, and more recently at Fespa Digital. This includes low migration inks that are suitable for food packaging though they can be used in other wide-format applications - at Fespa Agfa demonstrated one application where a customer had printed personalised images to tubs for butter, and another where images had been printed to bottle tops. Essentially Agfa has improved the polymerisation process so that when the inks are cured a higher percentage of the monomers and photo-initiators that make up a UV ink cross link together, preventing them from migrating through the substrate where they could otherwise contaminate the food product.

Inx Digital, which mainly makes inks including the Triangle range, has also started collaborating with printer manufacturers such as Neolt, which has developed wide-format printers for other vendors, including AEG. Inx has contributed the inks to the printer, which includes an unusual metallic UV-curable ink. This uses aluminium flakes, but as technical director Karla Witte says: “The main problem is to get the ink to flatten itself when it lands.” These inks are optimised to work with the new Xaar 1002 printhead. Sadly, although the printer was at Fespa, the metallic inks won’t be available until the end of this year.

Bordeaux Digital has launched a new range of inks for eco solvent printers that it’s calling Fuze. This is bound to cause some confusion given that the hybrid solvent and UV inks Fujifilm has just announced have the same name.Fujifilm’s Fuze inks are for the new Vybrant 1.6m wide roll fed printer (a rebadged Mimaki SUV printer) that was covered in last month’s Fespa review. Bordeaux’s inks have been tailored for specific models, rather than a one-size-fits-all approach. This includes a new 700ml cartridge, complete with dedicated chip, designed to replace Epson’s Ultrachrome GS2 ink. Bordeaux can also supply its inks in 1000ml bags, which can be used with Ink on Demand's Smart Cartridge System for longer uninterrupted printing cycles.

A number of ink companies used Fespa Digital to demonstrate third party inks for the textiles market. Roland Biemans, marketing manager for Kiian, says that many garment producers specify Kiian inks, explaining: “The labs that the print buyers use offer certifications on these inks for their customers with their materials”. Kiian showed off its Digistar range of sublimation inks, as well as the Digistar Gen-R ink formulation for use with Ricoh printheads and the recently launched K-One ink for the Kyocera inkjet printhead. 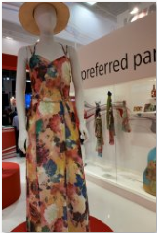 Sun Chemical has also launched its Streamline TX inks, because as Tony Cox, business manager aftermarket products, says: “The soft signage market has grown significantly over the last few years and we’ve seen a move towards substrates such as polyester-based textile materials which are used for products such as flags, banners and flexible signs.”

The Italian company J-Teck3 has developed a direct-to-fabric version of its J-Cube sublimation inks. There are two versions, J-Cube PK for Kyocera printheads and J-Cube PR for Ricoh printheads, both for polyester materials. The company also showed its new J-Melamine MM30, a water-based ink designed to work with Kyocera printheads, for printing to Melamine papers. These are used to create scratch resistant panels and laminates for the furnishing and home decor markets.

We have seen an abundance of new media introduced this year, including several that may open up new applications – not all can be listed here, but there are a few worth particular note.

Soyang has launched the Alumigraphics media made from pliable aluminium foil with a white finish. It’s said to be completely recyclable, and can be used with solvent, eco-solvent, latex and UV inks. It doesn’t require any lamination required and can be applied to virtually any rough or smooth textured surface, moulding naturally, without heat. There’s a choice of two different surface finishes: Smooth for interior and exterior wall surfaces such as brick, stucco, concrete or tiled walls; and Grip, which has a slip-resistant reflective surface, for external flooring applications such as concrete, asphalt or paving.

Sihl has launched the Solvent Photo Paper PE240, which is suitable for solvent, including eco-solvent, printers but can also be used with latex and UV inks. It has a surface weight of 240gsm and thickness of 235micron. It’s a glossy paper with a solvent-swellable coating and Sihl claims that it is suitable for printing with modern metallic inks. It has good scratch resistance and can be sprayed with cleaning materials and wiped clean.

Drytac used Fespa Digital to show off new additions to its ReTac permanently peelable range. Steve Broad, sales director for Drytac Europe, explains:  “Unlike traditional removable adhesives that all have a tendency to form a strong bond over time, these products have a new Polyacrylate adhesive technology that will not change its strength pattern over time, thereby offering a fantastic bond without the worry of damage to the underlying surface when removed.”The new films include a 75micron white polymeric PVC film that can be applied to ceramic tiles, PVC flooring, sealed wood, and sealed concrete. ReTac 200 is a more rigid 200micron high density polyethylene substrate that can be used to create graphics which hide the profile of the wall behind it for a smoother image.

Most of the technical advances that we will see in wide-format over the next few years will come in the sphere of inks development. Sure, new printheads will lead to greater productivity, but new ink formulations will bring the ability to print to new materials, which means new applications and further business opportunities. But many of these applications will lie beyond traditional graphic arts markets, so the trick will be to spot the potential.